"I’ll put it out there. People can decide for themselves." 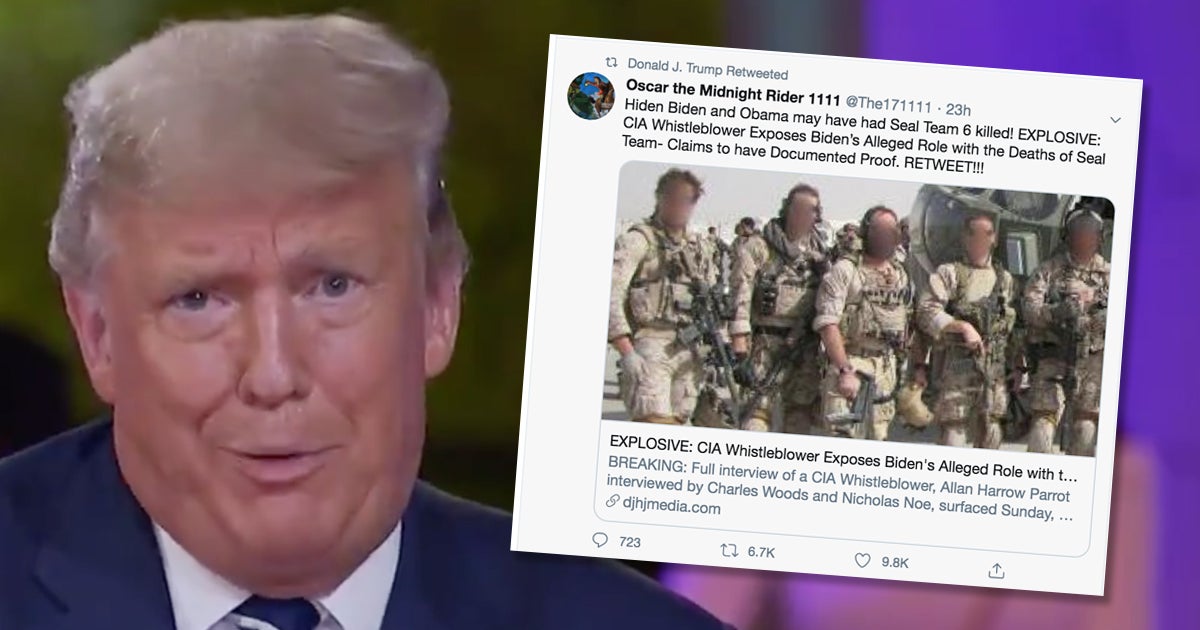 “I’ll put it out there, people can decide for themselves,” Trump said Thursday when asked during a televised town hall why he retweeted a batshit insane conspiracy theory that former Vice President Joe Biden orchestrated the murder of SEAL Team 6 members to cover-up the “fake” death of Osama bin Laden in 2011.

In May 2011, members of the CIA and SEAL Team 6 conducted a raid on bin Laden’s compound in Pakistan, killing the terror leader responsible for thousands of American deaths. Then, in Oct. 2020, the President of the United States decided to share with his 87 million Twitter followers an article, written by an “ex-community organizer” and “homeschool mom,” baselessly claiming that Bin Laden didn’t actually die in Pakistan but was instead transferred to the custody of Iran since then-Secretary of State Hillary Clinton had “outsourced the prison duties of terrorists” to Tehran.

Naturally, according to the “CIA whistleblower” cited in the article, then-President Barack Obama paid $152 billion to Iran and Biden had SEAL Team 6 killed months later in a helicopter crash. It gets way fucking weirder from there and makes absolutely no sense, so I need to stop at this point so neither you nor I develop an aneurysm. But if you’re so inclined to go further down the rabbit hole, have at it.

When asked about this on Thursday by NBC News’s Savannah Guthrie, Trump failed to state that he made a mistake in sharing such false information with Americans. Instead, the commander-in-chief went all drunk uncle on live television:

Pres. Trump: “That was a retweet, I’ll put it out there. People can decide for themselves.” @SavannahGuthrie: “I don’t get that. You’re the president. You’re not, like, someone’s crazy uncle who can just retweet whatever.” #TrumpTownHall pic.twitter.com/Im0QFy7VOU

“You’re the president, you’re not like someone’s crazy uncle who can just retweet whatever,” Guthrie responded.

“That was a retweet and I do a lot of retweets, and frankly, because the media is so fake and so corrupt, if I didn’t have social media — I don’t call it Twitter, I call it social media — I wouldn’t be able to get the word out,” Trump continued.

“And the word is false,” Guthrie said.

See! The president is just getting the word out and sharing the opinions of patriotic Americans in a hey just look at this thing, it’s kind of interesting but I’m not sure if it’s true kind of way with tens of millions around the world. A true man of the people!

Aside from receiving criticism over the retweet from many people with functioning brains, Trump also got pushback from Rob O’Neill, the former Navy SEAL on the Abbottabad raid credited with firing the fatal shots that killed Bin Laden.

“Very brave men said goodby [sic] to their kids to go kill Osama bin Laden. We were given the order by President Obama. It was not a body double. Thank you Mr. President,” O’Neill, a Trump supporter, wrote on Twitter.

Very brave men said goodby to their kids to go kill Osama bin Laden. We were given the order by President Obama. It was not a body double. Thank you Mr. President. Happy birthday @USNavy

O’Neill later told CNN’s Chris Cuomo these conspiracy theories are “really trampling on the graves of some of the best heroes I have ever personally worked with.”

This conspiracy theory is murky, but one thing is clear: if you’d like to share your thoughts on the Israeli government having a pack of evil, GPS-equipped sharks, or talk about the Russian plot to sap and impurify our precious bodily fluids, make sure to tag @realDonaldTrump on Twitter. The president is standing by and ready to amplify your thoughts on social media (he doesn’t call it Twitter).