Trump: the US ‘never really fought to win’ in Afghanistan

"Except at the beginning, we never really fought to win." 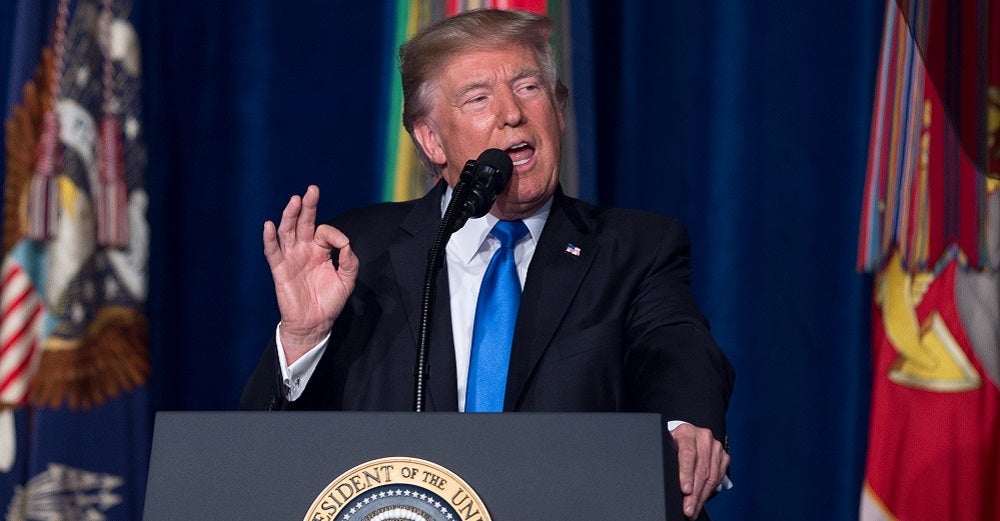 The 19-year-old war in Afghanistan needs to end because the United States stopped trying to secure a decisive victory years ago, President Donald Trump tweeted recently.

The president’s recent analysis of the strategic situation in Afghanistan came in response to a May 17 Wall Street Journal editorial, which argued the Taliban know Trump wants to withdraw all U.S. troops from the country and that may prompt them to try to get the president to make an “impulsive” move.

The following day, Trump fired back at the Wall Street Journal by tweeting he is not acting impulsively on Afghanistan.

“Besides, the Taliban is mixed about even wanting us to get out,” the president tweeted on May 18. “They make a fortune $$$ by having us stay, and except at the beginning, we never really fought to win.”

…..mixed about even wanting us to get out. They make a fortune $$$ by having us stay, and except at the beginning, we never really fought to win. We are more of a police force than the mighty military that we are, especially now as rebuilt. No, I am not acting impulsively!

Shortly after the Sept. 11, 2001 terrorist attacks, a small number of U.S. special operators along with CIA officers worked with Afghan warlords on the ground with massive support from U.S. airpower to overthrow the Taliban.

But Osama bin Laden and his al Qaeda fighters were able to escape from their fortress at Tora Bora. Retired Gen. James Mattis would later write in his memoirs that the head of U.S. Central Command at the time had refused to send infantry troops and special operators to seal off bin Laden’s escape route.

The U.S. war in Afghanistan quickly took a back seat after the 2003 invasion of Iraq, and by the time President Barack Obama ordered a surge of troops to Afghanistan in late 2009, the U.S. military’s goal was to degrade the Taliban, not to defeat it.

Any gains in Afghanistan as a result of the surge proved to be temporary, and the Taliban returned in force as the tide of U.S. troops in the country receded.

The Washington Post revealed last year that U.S. government officials had for years privately acknowledged the war was failing while publicly citing progress in Afghanistan.

Trump, who has long sought to end America’s post-9/11 wars, initially agreed to a troop increase in Afghanistan, but he has since said repeatedly that he wants to bring all U.S. troops in Afghanistan home.

The United States signed an agreement with the Taliban on Feb. 29 that calls for the U.S. military to leave Afghanistan over 14 months if the Taliban fight terrorism and meet other conditions.

The Taliban have since stepped up attacks on Afghan security forces, which are now resuming offensive operations.

In December, Task & Purpose asked Army Gen. Mark Milley, chairman of the Joint Chiefs of Staff, if the U.S. military was throwing away the lives of service members by continuing deploy troops to Afghanistan despite zero chance of victory.

“Absolutely not,” Milley replied. “I could not look myself in the mirror. I couldn't answer myself at two or three in the morning when my eyes pop open and see the dead roll in front of my eyes. So no, I don't think anyone has died in vain, per se.”