President Trump has approved a peace deal with the Taliban that may lead to the withdrawal of U.S. troops if the Taliban can commit to a reduction in violence for roughly one-week period later this month. 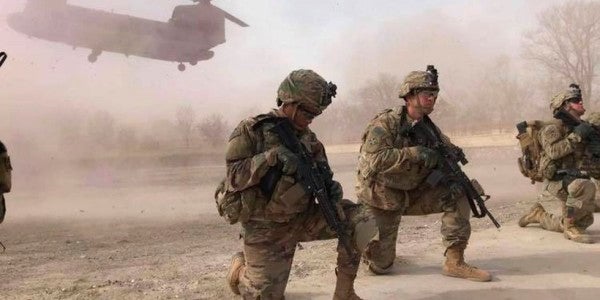 President Trump has conditionally approved a peace deal with the Taliban that may lead to the withdrawal of U.S. troops as long as the Taliban can commit to a reduction in violence for a roughly one-week period later this month, according to a new report in The New York Times.

Secretary of State Mike Pompeo told top Afghan leaders of the proposed plan in phone calls on Tuesday, according to the Times, which also reported that a senior American official said Trump had given his preliminary approval on Monday, the same day he made a visit to Dover Air Force Base to pay respects to two Army Special Forces soldiers killed in action in Afghanistan on Saturday.

“These are terrible sacrifices for the families. And these guys are heroes, they're real warriors and did a great job for the American people,” Robert O'Brien, Trump's national security advisor, told reporters. “These are tough times. It's tough for the president but he thinks it's important to be there for the families and recognize them.”

U.S. military officials with Operation Resolute Support did not immediately respond to a request for comment from Task & Purpose, nor did the White House or The State Department.

The U.S. reduced its troop strength in Afghanistan from 15,000 to 13,000 American troops in October. Though details regarding the timeline for a further reduction were not yet clear, a senior diplomat told The Times the tentative deal with the Taliban was “95 percent agreed to in principle.”

“If the Taliban do end hostilities and a deal is signed, the United States would then begin a gradual withdrawal of American troops, and direct negotiations would start between the Taliban and Afghan leaders over the future of their country,” Times reporters Mujib Mashal and Lara Jakes wrote.

In his State of the Union address earlier this month, Trump vowed he would bring troops home from Afghanistan though he did not offer a timeline.

“In Afghanistan, the determination and valor of our warfighters has allowed us to make tremendous progress, and peace talks are underway,” the president said. “I am not looking to kill hundreds of thousands of people in Afghanistan, many of them totally innocent. It is also not our function to serve other nations as law enforcement agencies.”

“These are warfighters, the best in the world, and they either want to fight to win or not fight at all,” Trump continued. “We are working to finally end America's longest war and bring our troops back home!”

The president called off peace negotiations with the Taliban in September after the group claimed credit for the bombing death of Army Sgt. 1st Class Elis A. Barreto Ortiz. In the months since, U.S. and Taliban negotiators have continued to build trust, The Times reported.

Meanwhile, the Defense Department budget request, made public on Monday, asked for the lowest level of funding for Afghanistan in nearly a decade, while noting that its request for war funding “assumes a drawdown of forces,” Military Times reported.

“We are cautiously optimistic about the breaking news that President Trump has conditionally approved a peace deal with the Taliban that would lead to a full withdrawal of American forces from Afghanistan. The administration would be wise to push this deal to completion and quickly withdraw our troops since a military presence in the country is no longer required for our safety,” Dr. William Ruger, vice president of research and policy for the conservative Charles Koch Institute, told Task & Purpose.

“It is time for Afghans to own the future of that country and find a path forward to its future.”

There have been 3,572 American casualties in Afghanistan, according to the website icasualties.org, which tracks U.S. and U.K. troop deaths in Iraq and Afghanistan. Six American troops have died in Afghanistan so far this year.