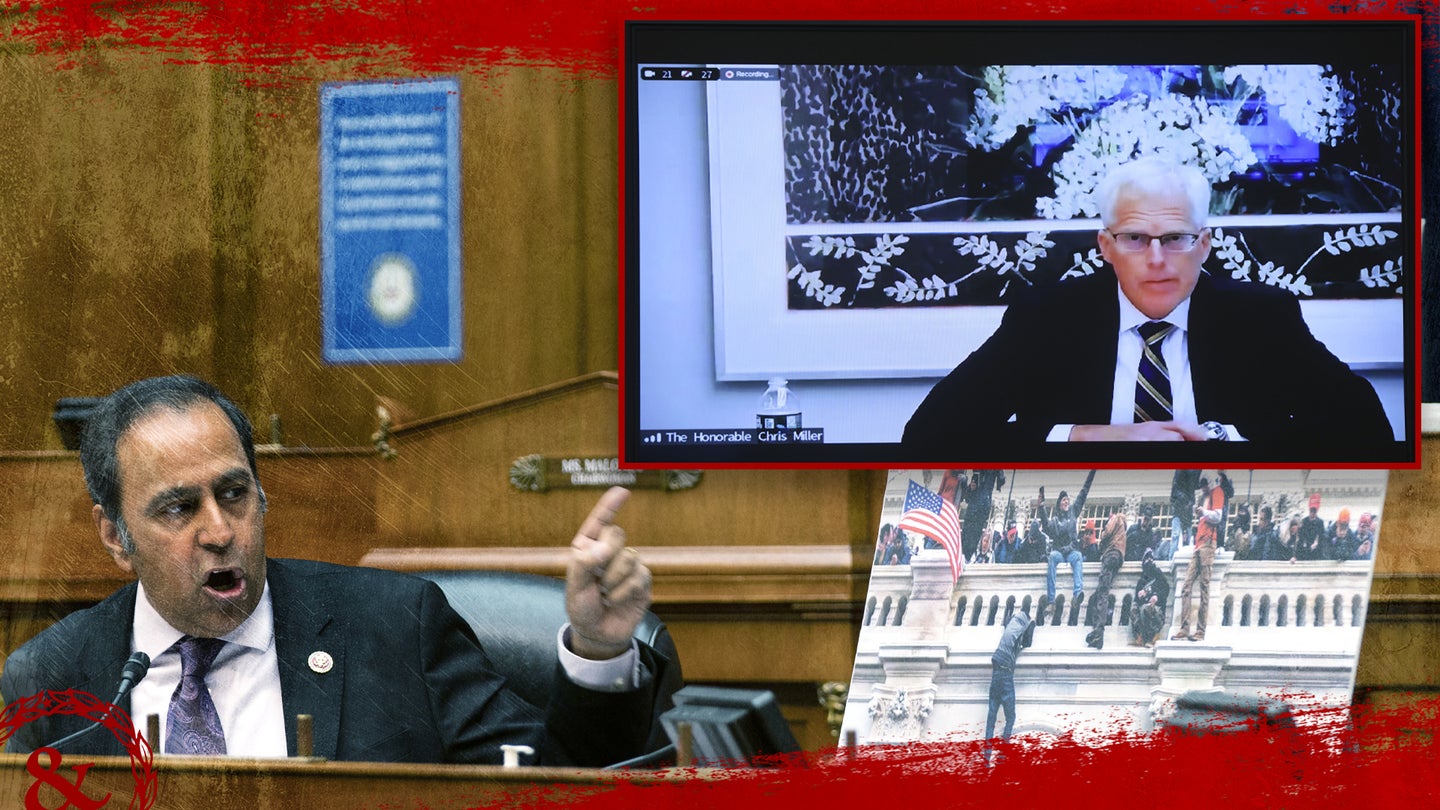 Wednesday’s Congressional hearing was supposed to be about why it took several hours for the National Guard to respond to the Jan. 6 insurrection on Capitol Hill, but it quickly devolved into that scene from Dodgeball when the team had to learn how to avoid getting hit by a wrench.

Lawmakers used every grandstanding tool at their disposal including making long speeches for the benefit of cable news, badgering witnesses and then refusing to let them respond, and using middle school insults along the lines of: I’m rubber. You’re glue.

Christopher Miller, the last person to lead the Pentagon in President Donald Trump’s administration, felt the wrath of several Democrats on the House Committee on Oversight and Reform after he refused to repeat his past comments, in which he said that Trump had inspired protesters to attack the Capitol on Jan. 6.

During an interview with Vice on Showtime in March, Miller was asked if Trump was responsible for the attack on Congress following his speech to supporters.

“I don’t know, but it seems cause and effect, yeah,” Miller replied. “The question is: Would anybody have marched on the Capitol and overrun the Capitol without the president’s speech? I think it’s pretty much definitive that wouldn’t have happened.”

And in his prepared testimony provided to Congress on Wednesday, Miller wrote, “I stand by my prior observation that I personally believe his comments encouraged the protestors that day, but I am not in a position to make an official assessment of his responsibility and, regardless, it was not relevant to the decisions I made on 6 January or my subsequent decisions continuing to my departure from the Department of Defense of 20 January 2021.”

But Rep. Stephen Lynch (D-Mass.) became enraged when Miller said he now thinks that some of the people who are accused of storming the Capitol had prepared for the attack ahead of time.

“Although we’re going to find out through the Department of Justice process and the legal system: It seems clear that there was some sort of conspiracy where there were organized assault elements that intended to assault the Capitol that day,” Miller said.

When Lynch pressed Miller about what he told Vice, Miller responded that he now believes that Trump’s speech was “not the unitary factor at all.”

Now shouting, Lynch reminded Miller of his prepared remarks about Trump encouraging the protesters on Jan 6.

“This is a very recent reversal of your testimony,” Lynch said.

“Thank you for your thoughts,” said Miller, who later added he was trying to draw a distinction between the marching on the Capitol and assaulting the Capitol.

From there, Democrats’ anger toward Miller turned into white hot rage. Rep. Raja Krishnamoorthi (D-Ill.) blasted Miller for saying in a January Vanity Fair article that historians will determine that Trump administration officials “had their game together” on Jan. 6.

Krishnamoorthi argued that a possible reason why it took Miller 90 minutes to approve activating the entire Washington, D.C., National Guard after Mayor Muriel Bowser’s urgent plea for help on Jan. 6 was that the former defense secretary had been indecisive and “just plain froze.”

Krishnamoorthi said he planned to demand a Defense Department investigation into Miller’s actions on Jan. 6, but Miller replied he had already requested such an inquiry before he left the job.

One of the most heated exchanges of the hearing came when Rep. Ro Khanna (D-Calif.) accused Miller of being more concerned with defending his own reputation than “the sanctity of this Capitol and the sanctity of our democracy.”

“Have you no sense of accountability, no sense of shame?” Khanna asked rhetorically. “Secretary Miller, I want to ask you today: Will you at the very least apologize to the American public for what happened on your watch?”

“Your pugnacious style is not going to override the democratic process,” Khanna said. “Learn to respect it.”

The two spoke past each other in a series of sharp questions and fragmentary answers until Khanna claimed there was a 36-minute delay from when Miller decided to send more National Guardsmen to the Capitol and when his order was received.

The issue came up during a senate hearing in March when a Pentagon official testified that it took 36 minutes for the commander of the D.C. National Guard to learn of Miller’s decision to activate more Guardsmen.

But Miller said he was unaware of what Khanna was talking about.

“Are you not aware of that timeline?” Khanna asked. “I mean, everyone in the country is aware that it took 36 minutes.”

When Miller said he has seen several timelines of the events of Jan. 6 along with inaccurate information about what happened, Khanna cut him off.

“You were in charge of the whole department!” Khanna roared.

“You’re saying you didn’t know that it took 36 minutes,” he continued. “Senators know; congresspeople know; every journalist knows – and you, who made the order don’t know? That’s worse than if you knew.”

Khanna then accused Miller of “having the gall” to try to hide behind the honor of U.S. troops.