As Kelly Eyes The Door, A Look Back At Him And Mattis Firing A Colonel In The Iraq War

I wouldn’t be surprised if both John Kelly and James Mattis left the Trump administration this summer, especially if later... 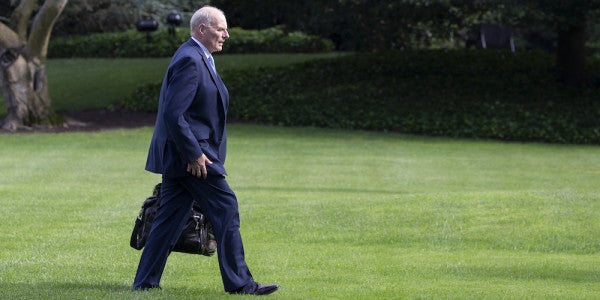 I wouldn’t be surprised if both John Kelly and James Mattis left the Trump administration this summer, especially if later this month the NATO summit goes badly and the Putin summit goes all too swimmingly, with agreements on Syria and Crimea and more.

So I figured it may be time to look back at the two of them back as Marine generals in the 2003 invasion of Iraq. This is what I wrote about them in my book The Generals.

The officer removed was not a general but a colonel. At the time, relief was so unusual that even this firing — of Col. Joe D. Dowdy, a regimental commander — made page-one news. Mattis has never publicly spoken about the relief, and in fact, in an oral history interview with an official Marine Corps historian, he declined to discuss it. However, in an interview with me on strategic issues, he did say in an aside that the practice of relief remains alive in his service: “We’re doing it in the Marines. Even Jesus of Nazareth had one out of twelve turn to mud on him.”

Col. Dowdy, in his oral history interview with a Marine Corps historian, blamed the situation largely on Mattis’s assistant division commander, Brig. Gen. John Kelly, who he said had nagged him about not moving fast enough, especially after Dowdy’s regiment had stopped for twenty-four hours outside the city of Nasiriyah, about 190 miles southeast of Baghdad, where both the Army and the Marines had run into stiffer resistance than they had expected. “Are you attacking?” Kelly said to him in a radio exchange during the invasion, according to Dowdy. Yes, Dowdy said, but “we’re still shaping” — meaning that he was in the initial stage of an attack, using artillery fire and maneuvering of units before directly engaging the enemy.

“Why don’t you drive through al-Kut?” Kelly said, pushing him again. Dowdy, who originally had been told to bypass that city via a roundabout route, asked why that was necessarily the best way to go, especially since he had reports of Iraqi minefields along the more direct route. He did not want to run another gauntlet like Nasiriyah, where an Army convoy had gotten lost, resulting in the deaths of eleven Army soldiers and the capture of several others, including two women, Pvt. Jessica Lynch and Spec. Shoshana Johnson. His view was that he was the commander in place and thus the officer best equipped to decide how and when to attack.

Not satisfied, Gen. Kelly called him again at one or two o’clock the following morning. “What’s wrong with you?” Kelly asked.

Kelly said he did not want to hear excuses.

“They’re not excuses,” Dowdy responded. “I’m the commander on the ground.”

Kelly told him that he was tired of the 1st Regiment “sitting on its ass” and planned to recommend that Mattis relieve Dowdy. “Maybe General Mattis won’t do it. Maybe he’ll decide he can get along with a regiment that isn’t worth a shit. But that’s what I’m going to recommend.”

Dowdy bypassed al-Kut and by morning had seized the bridges beyond the city that were his next objective. He felt “euphoric,” explaining that “we’d done what we needed to do, despite … the threat of being relieved.” He sensed that his unit was maturing and getting stronger, which he believed made it ready for the big fight he expected in Baghdad.

Then he got a message telling him to fly to the division’s forward headquarters. After he landed in a farm field and was walking to the tents where the division headquarters was set up, a dog leaped out and attacked him, “which you know kind of seemed symbolic.” Next he encountered Gen. Kelly, who told him that he had lost the trust of his superiors. Dowdy reeled at this, feeling that his twenty-four years of service in the Marines were going down the drain.

He walked inside the command post and saw the division chief of staff. “You’re doing great,” the officer said.

Dowdy went in to see Gen. Mattis, a quiet but intense officer with a reputation for favoring fiercely aggressive tactics. They were so near the front that artillery shells were passing overhead and tanks were rolling by the tent, creating what Dowdy heard as a whirlwind of noise. Mattis began asking questions that indicated to Dowdy that he would be removed on the grounds of fatigue. Dowdy had not slept for two days and felt that Kelly had just crushed his spirit. “I didn’t give a very good account of myself,” he told the Marine historian when he recounted his relief.

“What’s wrong?” Mattis gently and repeatedly asked him. “Why aren’t you pressing in the cities more?”

Dowdy, fatigued and confused, said that he was attacking but that “I love my Marines, and I don’t want to waste their lives.” By his own account, he then babbled a bit about his “lack of self-esteem” when he was younger. Even he recognized that such talk was a fatal misstep. At that point, he said, “I knew I was screwed.”

Mattis asked him about his combat experience. “We’ll do better,” Dowdy responded.

“No, no, no,” Mattis said. He stepped out of the tent, clearly wanting to think over his decision. Then he came back in and told Dowdy that he was being relieved and would be replaced by Col. John Toolan, who by chance had been Dowdy’s neighbor at one point. Dowdy first asked him to reconsider, citing the effect on him and his family. Mattis declined to do so. Dowdy then accepted the judgment and asked if he could work as a watch officer on the division staff, but Mattis told him that he “needed to go away.”

Dowdy left the tent and helicoptered south to a Marine C-130 aircraft, which then took him to a rear base in Kuwait. He took a shower and called his wife. “She already knew,” he recalled. He had become the only senior officer to be relieved in the entire invasion.

His conclusion about the affair was that relief should never be taken lightly. “It has such an adverse impact on someone, it’s very difficult to describe. But the whole world that you’ve built comes crumbling down. … And then to end it, to be subject to international humiliation. … To be the only commander in the whole war to be relieved, it’s very difficult to deal with that.” He left the Marines the following year and eventually went to work for NASA.

Mattis, by contrast, would rise swiftly through the military hierarchy, eventually succeeding David Petraeus as head of Central Command, a four-star post. He remains one of the most clear-thinking of American generals today, with a pungency in his speech that sometimes gets him into trouble but always seems to make an impression on young soldiers and Marines. “If we are to keep this great big experiment called America alive — and that’s all it is, an experiment — we need cocky, macho, unselfish, and morally very straight young men and women to lead our forces against the enemy,” he said to a group of midshipmen at the Naval Academy eighteen months after he fired Dowdy.

“Okay, it’s not a perfect world, but America is worth fighting for on its worst day. So, if you have got the guts to step across that line, as each of you have, then just go out and enjoy the brawl. Just have a damn good time. Train your men well. Go beat the crap out of people who deserve it, and when they throw down their gun, then you have won.”

Excerpted from The Generals: American Military Command from World War II to Today, with the permission of me.