Mattis’ Predecessor Praises Him For Sticking To His Guns 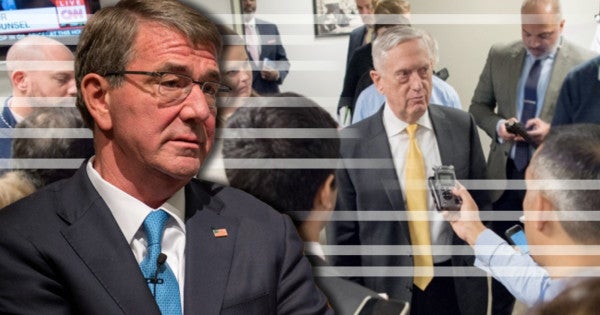 After Mattis, SecDef 26, dropped his letter of resignation on Trump's desk, in which he outlined that his deeply-held views were to treat allies with respect and clearly recognize strategic competitors around the globe — in contrast to the president — Carter, SecDef 25, praised his “exceptional strategic judgement” which didn't include “surrendering important American strategic positions.”

Mattis' resignation letter, while critical of the president’s views on foreign policy, did not mention Syria, but officials told The New York Times that Mattis traveled to the White House on Thursday “in a last attempt to convince Mr. Trump to keep American troops in Syria. He was rebuffed, and told the president that he was resigning as a result.”

Hours later, it's clear that the president had decided to withdraw all troops from Syria and roughly half of those currently in Afghanistan.

But there is at least one current and one former defense secretary who isn't on board with that plan, in addition to a number of lawmakers.

“I’ve known Jim Mattis since we first worked together in the Pentagon 25 years ago,” Carter said. “I was proud to see his exceptional strategic judgement as Secretary of Defense, including not surrendering important American strategic positions in places like Syria, Afghanistan, and elsewhere.”

An assistant for Carter declined an interview request from Task & Purpose.

Earlier this year, Mattis praised Carter's leadership late in the Obama administration, before unveiling his official portrait at the Pentagon.

“Over a period of 35 years, here is a man who served both parties … and 11 secretaries of defense,” Mattis said. “We’re touched by the unselfish performance of this leader. We honor your service today, Ash, as our secretary, but we keep in mind how you placed your country’s security first long before destiny tapped you on the shoulder to be our secretary.”