Mattis: I’m not part of The Resistance

Former Defense Secretary Jim Mattis insisted on Wednesday that he is not part of the so-called "Resistance" inside the Trump administration that is apparently working in secret to slow-roll or stop parts of The White House agenda. 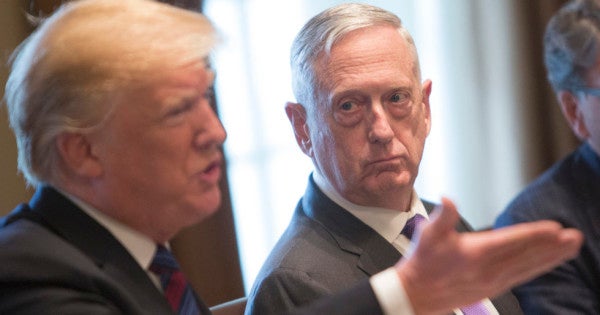 Former Defense Secretary Jim Mattis insisted on Wednesday that he is not part of the so-called “Resistance” inside the Trump administration that is apparently working in secret to slow-roll or stop parts of The White House agenda.

In an interview Wednesday on Morning Joe, Mattis was asked about the infamous op-ed in The New York Times published just over a year ago, titled I Am Part of the Resistance Inside the Trump Administration.

The anonymous and still not-publicly known “senior official inside the Trump administration” who wrote it said that he or she was part of a small group of other staffers “working diligently from within to frustrate parts of [Trump's] agenda and his worst inclinations.”

While some at the time speculated it could have been Mattis, who was then-Secretary of Defense, he said on Wednesday it wasn't him. The rumors of Mattis as a possibility weren't totally outlandish; after all, a book about the Trump administration by veteran journalist Bob Woodward published just a few days after the op-ed showed that Mattis wasn't exactly the type of guy you'd see sporting a Make America Great Again hat anytime soon.

Of the op-ed, Mattis said that he “wouldn't comment on it other than to say that I've never believed in cowardice. If I felt that strongly about something, I would have signed it.”

“I would have been right up front about it,” Mattis added. “I think you would owe that degree of candor, but I think, too, we have to look at this as a test of everyone's character in America,” he continued.

“Again, I don't think we have a problem today that suddenly mushroomed into our observation and what we're seeing here in the last six months, last two years, or last five years. I think this is a growing problem inside America.”

Mattis was certainly up front when he dropped a bombshell letter on Trump's desk when he resigned in Dec. 2018.

In the letter, which was circulated in press accounts at the time and is in Mattis' new book, the retired four-star general talked of how important allies were to the United States before he dropped the mic and told Trump he needed a SecDef that was more aligned with his divergent views.

You can watch a clip of the interview below: