Americans' eroding trust in all forms of government has made it impossible to solve the most serious problems facing the United States today, former Defense Secretary James Mattis wrote in a recent article for The Atlantic 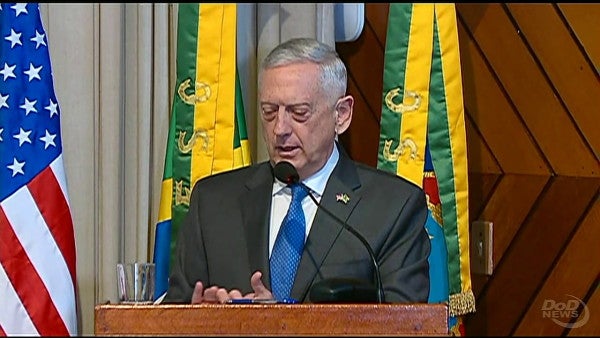 Americans' eroding trust in all forms of government has made it impossible to solve the most serious problems facing the United States today, former Defense Secretary James Mattis wrote in a recent article for The Atlantic.

The retired Marine Corps general laid out why the world's oldest democracy no longer seems to be able to reach a consensus on any issue, arguing that the underlying problem is politicians no longer debate: They just launch personal attacks against each other.

“We scorch our opponents with language that precludes compromise,” Mattis wrote. “We brush aside the possibility that a person with whom we disagree might be right. We talk about what divides us and seldom acknowledge what unites us. Meanwhile, the docket of urgent national issues continues to grow—unaddressed and, under present circumstances, impossible to address.”

While it is natural for those in government to have legitimate differences, what is dangerous is “the snarl, the scorn, the lacerating despair” that dominates the current political environment, he wrote.

“Too often we define our great national challenges—climate change, immigration, health care, guns—in a way that guarantees division into warring camps,” Mattis wrote. “Instead we should be asking one another: What could 'better' look like?'”

Democracy is based on the people's trust in elected leaders' ability to deliberate and then act, but a recent Pew Research Center survey found that two thirds of respondents indicated their trust in government is declining, he wrote.

If America is to tackle seemingly intractable problems, then its leaders need to start building trust by trying to listening to their opponents and including them in solutions, Mattis wrote.

Cynicism, which is increasingly pervasive in American politics, is not only the enemy of consensus building but it is also “cowardice,” Mattis argued.

“Cynicism fosters a distrust of reality. It is nothing less than a form of surrender,” Mattis wrote. “It provokes a suspicion that hidden malign forces are at play. It instills a sense of victimhood. It may be psychically gratifying in the moment, but it solves nothing.”

The United States needs grand solutions to confront the most dire threats facing the country, he wrote. It's long past time for Congress to think strategically and set long-term goals instead of lawmakers being selfishly obsessed with getting all that they want in the short-term.

“Here's the not-so-secret recipe, applicable to members of Congress and community activists alike: Set a strategic goal and keep at it,” Mattis wrote. “Former Secretary of State George Shultz, using his own Jeffersonian metaphor, likened the effort to gardening: a continual, never-ending process of tilling, planting, and weeding.”

Mattis also warned that Americans are deluding themselves if they expect one person to solve all the problems facing the country.

As former president Dwight D. Eisenhower – who was as five-star Army general during World War II – aptly stated, “The inspiration he gets from the people he leads,” Mattis noted.

Not all solutions need to come from Washington, who noted that national environmental, workplace safety, and minimum wage movements all began locally, Mattis wrote, noting that, “Washington isn't synonymous with America, anyway.”

“The president famously possesses a bully pulpit, but the impetus for change just as often comes from the pews,” Mattis wrote.