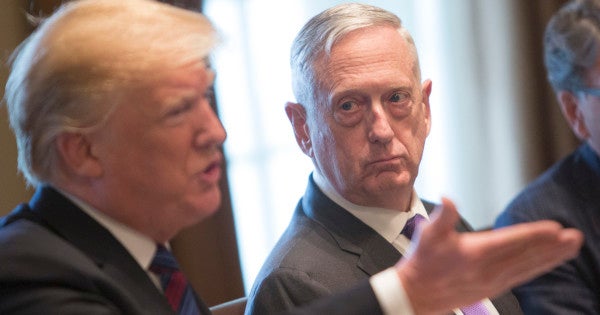 Buried in former Defense Secretary James Mattis' essay in the Wall Street Journal is a leadership lesson that sounds an awful lot like a veiled criticism of President Donald Trump's tendency to bully subordinates in person and on social media.

While the retired Marine general does not dwell on his decision to resign last December in protest over Trump's decision to withdraw all U.S. troops in Syria, which the commander-in-chief later reversed. Instead, Mattis opted to reiterate what he wrote in his resignation letter about the importance of treating allies with respect.

“Using every skill I had learned during my decades as a Marine, I did as well as I could for as long as I could,” Mattis wrote in Wednesday's op-ed. “When my concrete solutions and strategic advice, especially keeping faith with our allies, no longer resonated, it was time to resign, despite the limitless joy I felt serving alongside our troops in defense of our Constitution.”

Ever the professional warrior, Mattis does not criticize Trump directly. He did, however, recall a former NATO assignment when he worked with a European admiral who would yell in front of his officers in the presence of others and ridiculed reports he felt were subpar. His staff, Mattis writes, feared rather than respected him:

“I called in the admiral and carefully explained why I disapproved of his leadership,” Mattis wrote. “'Your staff resents you,' I said. 'You're disappointed in their input. OK. But your criticism makes that input worse, not better. You're going the wrong way. You cannot allow your passion for excellence to destroy your compassion for them as human beings.' This was a point I had always driven home to my subordinates.

“'Change your leadership style,' I continued. 'Coach and encourage; don't berate, least of all in public.'

“But he soon reverted to demeaning his subordinates. I shouldn't have been surprised. When for decades you have been rewarded and promoted, it's difficult to break the habits you've acquired, regardless of how they may have worked in another setting. Finally, I told him to go home.”

Mattis does not draw a direct parallel between the admiral and Trump, but it's hard not to see the similarities: he and the commander-in-chief had a fraught relationship for the last year of Mattis' tenure.

In August 2018, Trump contradicted Mattis on whether joint military exercises in South Korea could resume amid tensions with North Korea, tweeting, “There is no reason at this time to be spending large amounts of money on joint U.S.-South Korea war games.”

Then, during an October 2018 interview with “60 Minutes,” Trump described Mattis as “sort of a Democrat” – a label Mattis rejected, but a something of a kiss of death in this administration.

And that December, after media reports focused on the not-so-veiled criticism of the commander-in-chief in Mattis' resignation letter about the need to treat U.S. allies better, an enraged Trump falsely claimed that he had fired Mattis, telling the New York Times in February: “I wasn't happy with Mattis. I told Mattis to give me a letter. He didn't just give me that letter. I told him.”

Trump has demonstrated all the traits of toxic leadership that Mattis ascribed to the unnamed admiral in his op-ed. This time, though, Mattis knew he was the one who had to go home.