Toxic leadership at the top

Unfortunately, our commander-in-chief, President Donald Trump, exhibits the qualities of a toxic leader 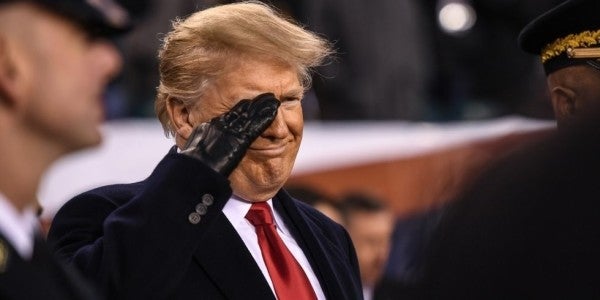 The U.S. military, and particularly the Marine Corps — in which I served both as an enlisted Marine and officer — puts a strong emphasis on leadership. Marines are taught leadership traits and qualities and are expected to exhibit them at nearly every level.

Unfortunately, our commander-in-chief, President Donald Trump, exhibits the qualities of a toxic leader.

Toxic leaders lead by force, not example. They are abusive, belittling and self-serving. And while the military has conducted many studies into the topic, a 2003 Army War College report described destructive, or toxic, leaders this way: “Destructive leaders are seen by the majority of subordinates as arrogant, self-serving, inflexible and petty.”

By the Constitution, the president is designated as the commander-in-chief of the U.S. armed forces. He (or she) does not serve in the military nor is he subject to court-martial or military discipline. However, it's not unreasonable to expect the president to live up to the values and laws that govern military service.

At a minimum, he should set the example with his conduct. Regrettably, President Trump is failing in that regard.

While there is some variation in the number of values listed and words used by the various service branches, all five military services have “core values” outlining basic ethical guidelines to guide and govern the conduct of their service members. They all exhibit common themes, among them honor, integrity and respect.

But here too, Trump regularly fails to meet those standards. The examples are many — particularly in recent weeks — and need not be listed here.

The president's spoken words and tweets disparaging and attacking others, or spreading falsehoods, are actions that would likely result in punishment for service members — particularly officers — who espoused similar sentiments. Military officers who engaged in such behavior wouldn't remain in the service very long, and their subordinates would rightly question their ability to lead and inspire — key traits for military leaders of all ranks.

For those who would argue that, by law, the president doesn't have to adhere to military values, standards, and laws: You're right, he doesn't. But I would argue that he should, especially since he so often professes his love for the military and champions the support he has provided (inaccurately in many cases but that's a topic for another day).

President Trump doesn't wear a uniform, nor is he required to meet physical or grooming standards, or required to follow the orders of those “appointed over” him.

He does, however, swear an oath similar to one that military officers do, to protect and defend the Constitution of the United States. The Constitution doesn't require the president to adhere to core values, or follow military laws and regulations, but shouldn't the American people, and service members in particular, expect the president to exhibit values and decorum at least at the same level we expect and demand of our military leaders?

The president doesn't have to rein in his disparaging and hateful comments, but he should. Not because it's required, but because it's the right example to set, and the right thing to do, not just for the military but for all Americans.

David Lapan is vice president of communications at the Bipartisan Policy Center. His career in public service spans more than three decades, with service in the U.S. Departments of Defense and Homeland Security. Lapan is a retired Marine colonel, with more than 30 years of military service and 22 years of communications/public affairs experience at the highest levels of the Defense Department. As a public affairs officer, he served as a spokesman and advisor for the Defense Department; for the 18th chairman of the Joint Chiefs of Staff; for the commander of the International Security Assistance Force (ISAF) and U.S. Forces—Afghanistan; and for multi-national forces during military operations in Haiti and Iraq.

The views expressed here are those of the author.