Senators back vice chairman of the Joint Chiefs of Staff nominee, who is accused of sexual assault

"The truth is Gen. Hyten is innocent of these charges," Sen. Martha McSally (R-Ariz.) said at Hyten's confirmation hearing on Tuesday. "Sexual assault happens in the military. It just didn't happen in this case." 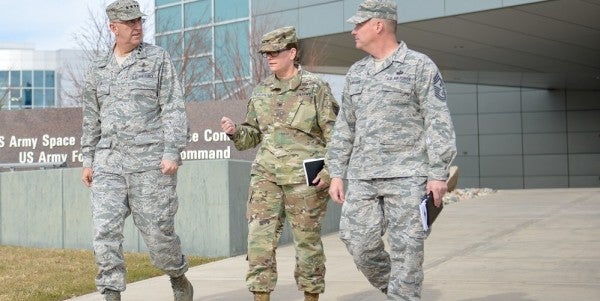 Senators voiced strong support to Air Force Gen. John Hyten, whose nomination as vice chairman of the Joint Chiefs of Staff no longer seems to be in danger of being derailed over sexual assault allegations against him.

“The truth is Gen. Hyten is innocent of these charges,” Sen. Martha McSally (R-Ariz.) said at Hyten's confirmation hearing on Tuesday. “Sexual assault happens in the military. It just didn't happen in this case.”

McSally, who recently revealed she was raped by a superior officer while serving in the Air Force, said she had devoted three weeks into looking into the allegations made by an Army colonel, who has accused Hyten of sexually assaulting her.

“All sexual assault allegations should be treated seriously and investigated fully,” McSally said. “All alleged victims should be treated respectfully. All accused should be assumed innocent and afforded due process. All of that occurred in this case.”

An Air Force investigation did not find enough evidence to support her allegations. That investigation was extensive and thorough, former Air Force Secretary Heather Wilson testified at Tuesday's hearing.

“After all of this, I believe the Senate will come to the same conclusion I did: Gen. Hyten was falsely accused and this matter should be set aside as you consider his nomination,” Wilson said at Hyten's confirmation hearing.

In his opening remarks, Hyten told the Senate Armed Services Committee that he has been accused of committing “one of the most serious problems we have in the military – sexual assault”

“It has been a painful time for me and my family, but I want to state to you and to the American people in the strongest possible terms that these allegations are false,” Hyten said. “There was a very extensive, thorough investigation, as Dr. Wilson described, which revealed the truth: Nothing happened. Ever.”

Hyten's accuser has been identified in media reports as Col. Kathryn A. Spletstoser, who told New York Times reporter Helene Cooper that the alleged sexual assault happened in December 2017.

However, Breitbart's Kristina Wong reported that she did not tell investigators about the incident or other examples of alleged sexual abuse in January 2018, when she was under investigation for allegations that she was a toxic leader.

Sen. Joni Ernst (R-Iowa) chastised Hyten for not counseling Spletstoser in writing and giving her a superlative review prior to the toxic leadership investigation.

Hyten said he initially thought the concerns his staff relayed to him about Spletstoser were about her alleged coarse language.

Still, Ernst said she has questions about Hyten's judgment for not taking the allegations against Spletstoser seriously enough.

“You serve in one of the most important positions within our United States military, overseeing our nuclear arsenal,” Ernst said. “However, you could not bring yourself to admit or recognize toxic leadership within your command. You did nothing to change that course until a 15-6 investigation was brought forward and you continued to endorse her.

“You only did something about it when concerns were raised about your own leadership. The investigation was not forwarded on to your higher echelon command, which I see as a clear conflict of interest. So all of this suggests a conflict of interest between your personal inclinations and your professional responsibilities.”

Members of the Senate Armed Services Committee met with Spletstoser in private on July 23. Two days later, Hyten discussed the allegations against him with lawmakers during a closed session.

Retired Air Force Col. Don Christensen, president of the advocacy group Protect Our Defenders, has backed publicly Spletstoser and accused the Air Force of trying to smear her.

“General Hyten was not 'cleared' by an investigation,” Christensen said in a statement on Tuesday. “Instead, a fellow four-star general made the decision to do nothing to Hyten. This raises questions about impartiality at the very least. For the sake of justice, the men and women who bravely serve our country, and military survivors, the Senate cannot confirm General Hyten tomorrow without undermining the very values that our military claims to protect.”

SEE ALSO: Sexual assaults in the military are on the rise. This bill would authorize Congress to intervene