"Assembling reporters to hear someone read a statement without the ability to ask questions risks further damage to the Department's credibility and the military's reputation for candor and trustworthiness. Questions from the press are not something to be feared." 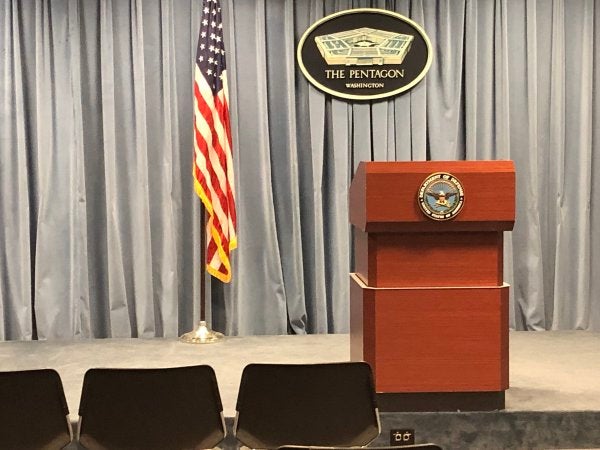 Beloved readers: It's been a rough week inside the Five-Sided Fun House as it looked like the United States and Iran were on a collision course until President Donald Trump aborted planned air and missile strikes at the eleventh hour.

As your beleaguered friend and narrator writes this, the Pentagon has not scheduled any briefings about how close the U.S. military was to attacking Iran, or even if those strikes have been called off or are on hold.

It would be nice to know whether we are at war or not. One would think the headquarters of the U.S. military would be a good place to find out. But the Trump administration has one spokesman: the president himself. His tweets have replaced Pentagon's briefings as the primary source for military news.

Throughout the week, defense officials strained to provide reporters with some information. With little notice, the Pentagon held an off-camera background briefing on Monday about the latest imagery of explosive devices found on foreign tankers in the Gulf of Oman – although none of the pictures actually showed Iranian military personnel placing the mines on ships.

That evening, Acting Defense Secretary Patrick Shanahan announced another 1,000 U.S. troops were headed to the Middle East to deter Iran. There was no briefing. (In the Pentagon's defense, this correspondent can be a tad aggressive when pressing for answers at briefings.)

Events reached a climax on Thursday, following the news that Iran had shot down a $110 million U.S. military drone. Reporters were given about 30 minutes notice for a “briefing,” which was actually the head of U.S. Air Forces Central Command reading a brief statement. He did not take any questions.

The Pentagon also provided a brief video of the drone going down and map of the aircraft's flight path, but for the most part, defense officials have left it to the president to inform the public about whether their sons and daughters will be going into harm's way.

In response to criticism about how the Defense Department is dealing with the media about Iran, a Pentagon spokeswoman said military press officers both in the United States and the Central Command area of responsibility are working to answer questions from journalists around the world.

“Throughout the Department of Defense, leaders and spokespeople from multiple offices are providing as much information as we can about this dynamic, on-going event,” Navy Cmdr. Rebecca Rebarich told Task & Purpose. “We are respectful of the public's right to know about ongoing military operations, as we maintain operational security in the protection of our personnel and assets in the region.”

However, the Pentagon also needs to resume holding regular briefings at which reporters can ask questions, said retired Marine Col. David Lapan, who has served as a spokesman for the Defense Department and the chairman of the Joint Chiefs of Staff.

The situation with Iran is growing more complicated every day, so it is especially important for the Defense Department to keep Americans informed while protecting classified information so that the public understands how the military is being used, Lapan told Task & Purpose on Friday.

“In recent days, after attacks on tanker ships in the Gulf and Iran's shoot down of a US military UAV, the military has provided some information about the incidents but done so in a limited way, which raises questions about why it hasn't been more forthcoming,” Lapan said.

“Assembling reporters to hear someone read a statement without the ability to ask questions risks further damage to the Department's credibility and the military's reputation for candor and trustworthiness,” he added. “Questions from the press are not something to be feared.”

Unfortunately, the Pentagon has moved away from its longstanding tradition of providing “maximum information, minimum delay” under pressure from the White House, said retired Army Lt. Col. Fred Wellman, who served as a spokesman for both Army Gen. David Petraeus and Gen. Martin Dempsey.

When the Defense Department ignores reporters, it is also keeping the American public ignorant about the sacrifices that service members make while fighting the country's wars, said Wellman, founder and CEO and founder of ScoutComms a Virginia-based PR and research firm focused on veterans and military family efforts.

“We can't say we are angry at the American people for not caring about the military or the much talked about 'civil-military divide' and then go stone silent in our efforts to tell them what we are doing,” Wellman told Task & Purpose. “American service members shouldn't be fighting, dying and isolated alone around the world because someone might accidentally say something on camera.