Mattis’ 2017 Message To Troops Is Worth Remembering: ‘Just Hold The Line’

Defense Secretary Jim Mattis has resigned from his post — leaving many to freak out about what's to come in... 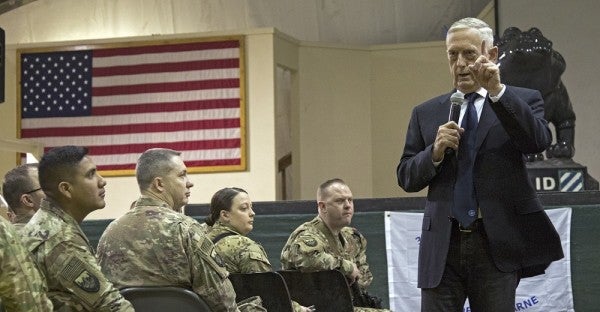 Defense Secretary Jim Mattis has resigned from his post — leaving many to freak out about what's to come in the defense world — but a message he personally delivered last year to troops under his command is worth heeding before he departs in February.

“You just hold the line until our country gets back to understanding and respecting each other, being friendly to one another; what Americans owe to one another,” Mattis said in 2017.

Mattis' resignation comes on a the heels of a disagreement with President Donald Trump over the latter's decision to withdraw U.S. troops from Syria — the consequences of which are unclear, though there's speculation that ISIS may not be as “defeated” as the Trump administration claims, and that the U.S. military's departure from the country will leave our local allies vulnerable and create further instability, out of which some new fresh hell will emerge.

On top of that, Trump is reportedly considering withdrawing half of the U.S. service members currently deployed to Afghanistan. Approximately 7,000 troops are deployed there to support the Afghan government in America's aging war against the Taliban.

Considering all the uncertainty hanging over the Department of Defense amid sudden and potentially tumultuous changes, now seems like the right time to resurface a speech Mattis gave to troops deployed downrange just last year.

During a 2017 visit to Afghanistan, Mattis spoke to deployed troops and defense contractors with his usual glibness, remarking that “you guys ambushed me,” before launching into a folksy moto speech chock-full of Mattisms.

“For those of you I haven’t met, my name’s Mattis, I work in the Department of Defense, obviously,” he quips, before striking a more serious tone. “Thanks for being out here, okay. I know at times you wonder if anybody knows.”

“You get promoted after a while and you’re so remote and you get out of touch with those of you who matter, but believe me I know you’re far from home, every one of you,” Mattis continued. “I know you could be going to college, you young people, or you could be back on the block. I’m just grateful. The only way this great big experiment that you and I call America is going to survive is if we’ve got tough hombres like you.”

Mattis’ popularity among American service members — and his nearly cult-like following among Marines — has less to do with his distinguished four decades of service, and more to do with his frank way of addressing, and showing appreciation for junior troops.

“Some of you are too young, but on 9/11, we backed up against an enemy who thought if he could hurt us, he could scare us,” Mattis continues in the video. “But we don’t friggin' scare. That’s the bottom line.”

This speech, like many other anecdotes and stories about Chaos — never Mad Dog — keeps the focus on the rank and file, the NCOs, the guys out on post standing balls watch, you know, the ones who are rarely in the spotlight:

“You’re a great example for our country right now,” Mattis adds. “It’s got some problems. You know it and I know it. It’s got problems that we don’t have in the military. You just hold the line my fine young soldiers, sailors, airmen and Marines. You just hold the line until our country gets back to understanding and respecting each other, being friendly to one another; what Americans owe to one another.”

Though Mattis wraps up the speech with a joke that he “flunked retirement” once already, he’s headed back for a second try. In his absence, his words to those servicemen and women still out in harm's way merit repeating, and remembering: “Hold the line” and “take care of each other.”