Mattis: This Is The One Book Every American Should Read

Defense Secretary Jim Mattis thinks every American should read Meditationsby Marcus Aurelius. After giving a speech to cadets at the... 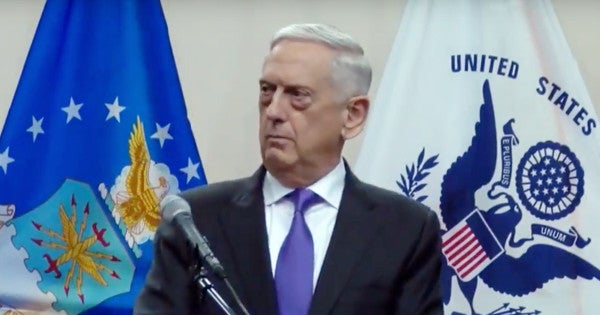 After giving a speech to cadets at the Virginia Military Institute on Tuesday, Mattis was asked what he would hypothetically tell every American to read. Meditations — which he frequently consults and recommends, was at the top of his list.

“Especially in Washington D.C., with all the political heave and ho that I try to keep the Department of Defense out of, there can be a sense at times, my fine young cadet, that it’s the first time anyone’s dealt with something like X, Y, or Z. And certainly in combat the reason I kept a tattered copy in my rucksack to pull out at times was it allowed me to look at things with a little distance,” Mattis said.

Written as a series of private notes to himself over a 20-year-period, the Roman emperor offered his ideas on the Stoic philosophy and how he overcame challenges in his daily life.

Fortunately, he wrote in fairly plain language, making his thoughts still accessible to this day.

“And so Marcus Aurelius had a very tough life,” Mattis said. “He’s the Emperor of Rome but he’s got everything going wrong in his home life. His wife and his son were not people that you’d want to spend much time with. He spends almost all of his time up on the fringes of the Empire trying to protect the thing and the one time he leaves the German forest seems to be to go kill one of his friends who’s revolted against him in another place. It was a tough life and yet the humility and the dignity with which he conducted his life — the commitment to his country, to his troops, really comes through as you read those pages.”

There's a good reason why Meditations is one of Mattis' favorites. In the world of politics and back-stabbing that is Washington, D.C., the stoic ideals shine through as philosophical armor against the daily bulls–t. Like, for example, this: “If you are distressed by anything external, the pain is not due to the thing itself, but to your estimate of it; and this you have the power to revoke at any moment.”

Consider this passage, which can easily be ascribed to a variety of people Mattis has to deal with on a daily basis:

“When you wake up in the morning, tell yourself: The people I deal with today will be meddling, ungrateful, arrogant, dishonest, jealous, and surly. They are like this because they can’t tell good from evil. But I have seen the beauty of good and the ugliness of evil, and have recognized that the wrongdoer has a nature related to my own – not of the same blood or birth, but the same mind, and possessing a share of the divine. And so none of them can hurt me. No one can implicate me in ugliness. Nor can I feel angry at my relative, or hate him. We were born to work together like feet, hands, and eyes, like the two rows of teeth, upper and lower. To obstruct each other is unnatural. To feel anger at someone, to turn your back on him: these are obstructions.”

Beyond Meditations, Mattis also said you “could do no better” than to read the autobiography of Ulysses S. Grant.

“I think his memoirs would be the one if you want something that’s perhaps not quite so ancient,” he said. “I really didn’t serve with Marcus Aurelius, I just look that old; okay?”

You can watch his full speech below, or click here for some more on Mattis' favorite books.