Forget who has the bigger button: President Donald Trump probably has the biggest gun of all the world leaders —... 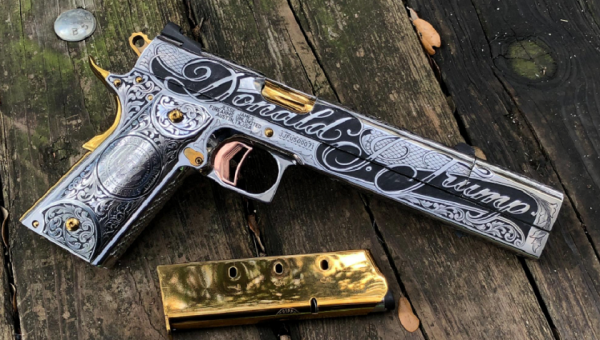 Forget who has the bigger button: President Donald Trump probably has the biggest gun of all the world leaders — and if not the biggest, it’s certainly the glitziest — thanks to chopper-modder turned gunsmith, Jesse James.

In a Jan. 18 Maxim exclusive, the celebrity mechanic and armsmith of West Coast Choppers fame debuted his newest creation — a 24-karat gold plated .45 for 45 from Jesse James Firearms Unlimited.

The modified 1911 has an extended barrel perfectly designed to conjure up those Clint Eastwood feels when President Trump is swaggering around the Oval Office being “modern day presidential.” Plus, it’ll give him an excuse to say: You feel lucky, punk?

“Dirty Harry always had that long .44 Magnum. So it seemed kinda obvious that we should do a .45 caliber since he’s the 45th president, right?” James told Maxim’s Chris Wilson.

The gold-gilded hand-cannon was created by Jesse James of West Coast Choppers fame.Maxim

James, who befriended Trump after appearing on The Celebrity Apprentice in 2009, decided to craft the pistol “as soon as I knew he was gonna win,” he told Maxim. “I wanted to really do something special. Even without the presidency, I wanted to do something that was a little on the flamboyant side.”

Related: This Freedom-Loving Firearm Is Forged With Pieces Of The Statue Of Liberty »

And, well, he nailed it. Beyond all the gold and shiny, the pistol says “Donald Trump” on one side, “45th President of the United States Of America” on the other, and “Build That Wall” on the muzzle. It has a two-piece slide and compensator, and also comes in a handmade case apparently created from one of the George Washington’s original Chestnut trees.

The price of the pistol — which James seems intent to sell in order to keep this gold-plated cannon in Trump’s hand, rather than resting in a presidential museum — is still under wraps. Who knows, though, if the president buys it maybe he can write it off as a work expense on his taxes.