Does POTUS Think The F-35 Is Literally Invisible? An Investigation

Does President Donald Trump think the F-35 fighter is literally invisible? After researching his various statements on the 5th generation... 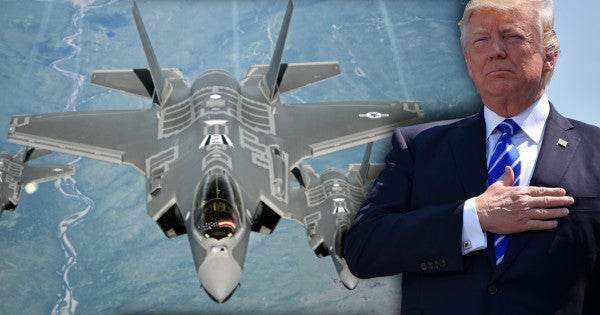 Does President Donald Trump think the F-35 fighter is literally invisible? After researching his various statements on the 5th generation fighter, I don't really think so. But since he keeps saying exactly that — that the F-35 cannot be seen by enemy pilots — plenty of people are curious about the answer.

I tried to dig up as many statements I could find of Trump talking about the F-35, which are listed below. On the campaign trail and as president-elect, Trump was pretty critical of the aircraft and its insane pricetag (rightly so). Then, shortly after his election, he began to talk about bringing that number down.

For most of 2017, Trump touted his supposedly single-handedly saving $700 million from the program. These statements weren't really true, but later in the year he started to talk less about the plane's budget and more about its “incredible” capabilities.

In October, as far as I can tell, Trump made his first statement touting the plane's supposed invisibility. Maybe an F-35 pilot earlier in the week told him, “Hey sir, this thing is incredible. We love this plane. We're pretty much invisible on enemy radar. They can't see us out there.” Then it became a game of telephone where the president left out some important details, I think:

For the record, the F-35 is stealth. It is, by all accounts, invisible on most enemy radar. But I can assure you that the enemy can definitely see the plane if it's right next to it, contrary to Trump's Nov. 2017 statement.

So does he think the F-35 is invisible to the naked eye? Probably not. He generally means that it cannot be seen on radar, which is largely accurate. That view is where I come down on this issue, at least. But the president should probably make that clearer so he doesn't end up sounding like an idiot.