The Air Force and Lockheed Martin are making a big fuss out of the first-ever acrobatic demonstration of the much-hyped... 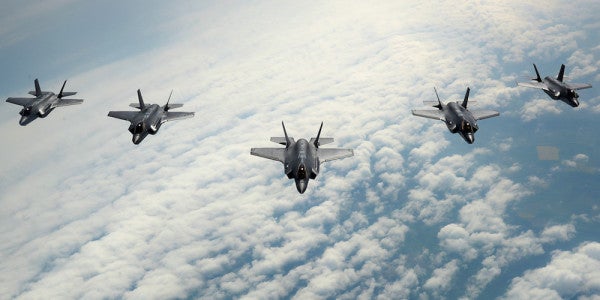 The Air Force and Lockheed Martin are making a big fuss out of the first-ever acrobatic demonstration of the much-hyped F-35 stealth fighter at the Paris Air Show this week, for one good reason: to astound and astonish allies and enemies alike with a lung-crushing display of American engineering prowess.

The daily peacocking of the deeply flawed and notoriously expensive combat fighter in the skies above Paris is meant to “reassure (allies) that we are committed to NATO 100 percent and that we have got the capability to respond to any action necessary,” F-35 joint program administrator Brig. General (Select) Todd Canterbury told the Associated Press on June 19 — despite recent, uh, ambiguity around the U.S. commitment to NATO.

But the tests also have another important purpose: to “crush year of misinformation” about the fighter, as Lockheed Martin test pilot Billie Flynn told Aviation Week on June 18. And boy howdy, is the F-35 getting the job done!

So what’s the verdict on the F-35’s breathtaking debut in Paris? Here are seven reasons the most advanced combat fighter on the planet will actually take your breath away.

The plane suffocates its pilots

Since May 2, five F-35A pilots with the 56th Fighter Wing out of Luke Air Force Base in Arizona have reported experienced hypoxia (a lack of oxygen in one’s tissue) while operating the fifth-generation fighter. The Air Force ordered a stand-down on flights on June 12 to investigate the problem.

While Luke Air Force Base recently announced it would resume flight operations on June 21, “no specific root cause for the physiological events was identified during recent visits from experts and engineers,” according to a statement by 56th Fighter Wing public affairs officials.

Despite the head-scratching from a cadre of technical minds employed by Lockheed Martin and the Air Force Research Laboratory, “specific concerns were eliminated as possible causes including maintenance and aircrew flight equipment procedures.” Which means that engineers know something is wrong, but everything looks okay. That’s extremely reassuring.

The Air Force seems pretty okay with all of this

Read that last section again: Luke AFB is resuming flight operations despite the fact that fact that the most brilliant “experts and engineers” in the military-industrial complex can’t figure out the source of the problem. No wonder more than 100 instruction pilots in the Navy’s aviation program went on strike until the branch dealt with rampant oxygen-deprivation issues in its T-45 Goshawk training squadrons.

It’s the most expensive suffocation ever

The F-35 was already the most expensive weapons system in military history (trebuchets didn’t cost nearly as much, even in their historical context), and it’s only getting more expensive: An April 2017 GAO report found that the 16-year-old program was delayed by another year and $1.7 billion over budget. That’s really, really depressing when you consider that the Pentagon is shelling out billions for a fighter that can’t even outmaneuver the fourth-generation F-16 in a dogfight.

The Air Force has known about this issue for years.

On June 15, the Air Force told Military.com that 15 F-35 airmen had experienced incidents of hypoxia since 2011, a trend the branch didn’t disclose to the public until the string of oxygen deprivation incidents at Luke Air Force Base prompted an investigation into the problem. Of those 15 incidents, only five occurred in F-35s operating out of Luke; the other 10 cases “were considered isolated incidents,” Air Force spokesman Capt. Mark Graff told Military.com.

Cockpit hypoxia has remained a top safety issue for Navy aviators for years, reported in fourth-generation aircraft like the F/A-18 Hornet and EA-18G Growler variants. On June 16, the Navy revealed that four pilot deaths were the result of oxygen system failures in the Hornet.

The oxygen-deprivation problems aren’t just constrained to training aircraft like the T-45. As War Is Boring points out, in 2011, the Air Force grounded its fleet of F-22 stealth fighters, supposedly “the most capable aircraft in the world,” due to a hypoxia rate that was nine timesmore pronounced than in other U.S. fighters.

The Air Force will send you downrange regardless.

As Task & Purpose’s Adam Weinstein observed in May,the USS George H.W. Bush and USS Carl Vinson reportedly deployed to the Persian Gulf in January of this year with “hyperbaric chambers, ‘slam sticks,’ and even store-bought Garmin wristwatches” to deal with the hypoxia issue. At this juncture, cockpit hypoxia seems likelier to kill a pilot over Syria than a surface-to-air missile does, but time will tell.

Hey, a hypoxia question! Didn't get a single one in four hearings with Mattis/Dunford last week.

Given how hard flacks are flogging the aircraft in Paris, it appears that the Air Force isn’t just okay with its own pilots taking the risk — it’s very okay watching airmen stick their necks out, even though neither the Air Force or Lockheed Martin can promise F-35 flight operations won’t end up endangering their pilots as much as enemy targets.

At least the fighter's new theme song is appropriate: