The F-35 Is Getting Closer And Closer To Combat

The F-35 Joint Strike Fighter, one of the most fraught defense programs in U.S. military history, is getting closer and... 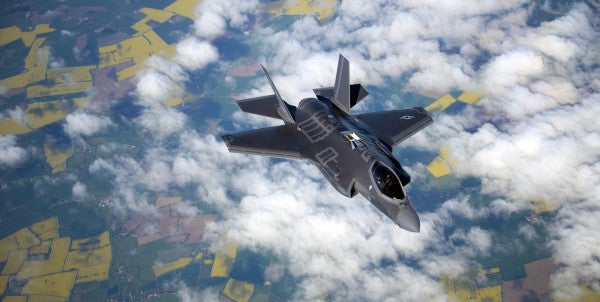 The F-35 Joint Strike Fighter, one of the most fraught defense programs in U.S. military history, is getting closer and closer to the point where it will be introduced to full service. With the United States waging increasingly active anti-terror operations, as the military deploys more and more it seems unavoidable that the F-35 is destined for a combat test.

As recently as last year,the Air Force declared the F-35 was “combat ready,” having reached a stage called “initial operating capability,” which means the platform is ready to be put into action on combat missions.

At that time, senior military leaders touted the development of the aircraft.

“The F-35A will be the most dominant aircraft in our inventory because it can go where our legacy aircraft cannot and provide the capabilities our commanders need on the modern battlefield,” now-retired Air Force Gen. Hawk Carlisle said last summer when he was commander of Air Combat Command.

The F-35’s introduction to combat could be a baptism by fire.

So far this year, the F-35 has been deployed twice, once by the Marine Corps and once by the Air Force, though neither deployment was in a combat capacity.

Most recently, a squadron of Air Force F-35A Joint Strike Fighters was added to a deployment to the Baltics. The unit will be part of the European Reassurance Initiative, a program that former President Barack Obama began to ensure good relations with European allies amid Russia’s annexation of Crimean peninsula in Ukraine in 2014.

CNN called the deployment an “effort to reassure European allies in the face of Russian aggression on the continent.”

But according to a piece fromthe Daily Caller News Foundation, the F-35A will not be a part of NATO air policing operations in the Baltics along the Russian border. Its training operations will reportedly primarily take place in the United Kingdom, but could involve deployments to other European countries as well.

This marks the first time the F-35 is being deployed to send a message, and the move puts the F-35 closer to action than it’s ever been in the U.S. arsenal. It comes amid a recent intrusion on U.S. airspace in Alaska on the part of Russian bombers, on April 17, when two Russian Tu-95 Bear bombers flew off Russia’s Kodiak island, prompting the U.S. Air Force to scramble two F-22 Raptor stealth fighters and an early-warning plane to intercept them. It’s the estimated 60th such intrusion of the Russians into American airspace since 2007,the New York Times reports.

So the F-35 is headed to the Baltics at a terse time. Earlier this month, U.S. Secretary of State Rex Tillerson said U.S.-Russian relations were at a “low point.”

The F-35 deployment to Europe comes after the Marine Corps sent a squadron of its F-35Bsto Japan at the beginning of this year for a “wide-ranging deployment to the Pacific.”

That deployment carried the F-35sto South Korea for a “defensive” training operation with the South Korean military amid rising tensions with North Korea over their bellicose rhetoric and weapons testing. The Trump administration has put U.S. relations on a collision course with North Korea, declaring an end to the era of strategic patience that marked U.S. posture toward the Hermit Kingdom for decades.

That’s two deployments this year for the once-fraught F-35 program, a program that has been hit with setbacks and swelling costs.

As recently as 2014, the entire American arsenal of F-35s was grounded amid engine fires that occurred during testing.

That came after delays in the delivery of the first aircraft and important testing milestones.

In total, the cost of the F-35 program swelled a whopping $200 billion over initial projections.

The F-35’s cost issues hit a new low in December of last year when then-president-elect Donald Trumptweeted about the “tremendous cost and cost overruns of the Lockheed Martin F-35,” and claimed that he had asked “Boeing to price-out a comparable F-18 Super Hornet!”

Shortly thereafter, Lockheed Martin promised to reign in the costs of the program, andit’s been reported that the next batch of F-35s could be delivered as cheaply as less than $100 million per unit.

Around the same time as Trump’s tweets in December,Israel took delivery of its first F-35s from Lockheed. Those F-35s are the first and only versions of the aircraft in the Middle East. If you want to understand how big of a deal it was that the F-35s were dispatched to Israel, just look at who was in the welcoming party. Senior Israeli military leaders were joined at Nevatim Air Base by Israeli Prime Minister Benjamin Netanyahu, then-American Defense Secretary Ash Carter, and Lockheed Martin president Marillyn Hewson.

And there’s a small chance Israel has already wielded its F-35s in combat operations in Syria.The Drive’s Tyler Rogoway details claims by a journalist at the French newspaper Le Figaro that the Israeli F-35s were participating in combat operations as early as January of this year. Rogoway details why that’s not likely. The purported raid, on the night of Jan. 12, was just weeks after the F-35s were delivered to the Israeli military. And to date, they still haven’t been declared operational by the Israeli military. Rogoway notes that with the increases in Russian involvement in Syria, Bashar al Assad’s regime’s air defenses are gaining in capability, “eventually using the F-35I for extremely high-priority missions over the war-torn country may become a necessity.”

So maybe Israel will be the first to test the combat capabilities of the F-35 in a real-world scenario. Or maybe we’ll just have to continue to hold our breaths with Russia and North Korea. What’s most clear? A combat-capable next-generation fighter and strike aircraft can’t come soon enough.