Not content with F-35 debacle, the Navy is now working on a brand new fighter jet

The Defense Department may not have finished working out all the kinks in the ultra-expensive and perpetually buggy F-35 Joint Strike Fighter, but the Navy is still plowing ahead with a multi-billion-dollar effort to develop the U.S. military's first new fighter jet in nearly two decades 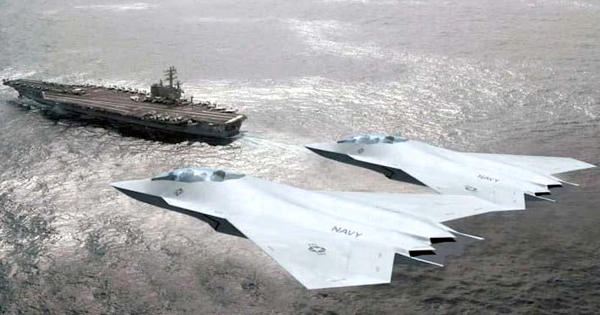 The Defense Department may not have finished working out all the kinks in the ultra-expensive and perpetually buggy F-35 Joint Strike Fighter, but the Navy is moving forward with a multi-billion-dollar effort to develop the U.S. military's first new fighter jet in nearly two decades.

The Navy has “quietly initiated work” to develop a sixth-generation carrier-based fighter to replace the multirole F/A-18E/F Super Hornet and the electronic attack EA-18G Growler sometime in the 2030s as part of the service's Next Generation Air Dominance (NGAD) initiative, USNI News reports.

The NGAD effort — also known as the F/A-XX — comes amid shifting priorities within the Pentagon, which is pivoting from its counter-terrorism and counter-insurgency missions in the Middle East and North Africa to focus on so-called “great power competition” against more traditional adversaries like Russia and China — a transition that appears to have left the F-35 Lightning II in the dust.

“The F-35 fighter jet took more than 20 years to take from blueprints to an operational fighter,” as Popular Mechanics observed. “From early on, the F-35 was locked into design choices that made sense in a period of non-competition, such as relatively short-range, low supersonic speed, and a small internal weapons bay. If the Pentagon knew in the mid-1990s what it knows today, it might have asked for a vastly different airplane.”

Indeed, while next-generation fighter “would include many of the capabilities” as the Navy's current fleet of F-35C fighters, the aircraft will come “with updated technology and expanded range,” naval analyst Bryan Clark told USNI News, part of an effort to expand the effectiveness of the U.S. fleet of aircraft carriers at sea.

“We’re working to outline that program and the acquisition approach and all that as we speak,” Navy acquisition chief James Geurts told reporters last week.

The NGAD effort was still in its concept development phase as recently as June, during which defense companies explored ideas “that balance advanced air dominance capabilities and long-term affordability/sustainment,” as Navy spokesman Capt. Danny Hernandez told Defense News at the time.

While the Navy doesn't have a set cost estimate for its NGAD effort, it likely won't come cheap. A January 2020 Congressional Budget Office report estimated the service could end up doling out approximately $67 billion to replace its Super Hornet fleet and $22 billion to replace the Growlers from 2032 to 2050, per USNI News.

According to Defense News, the service's fiscal year 2021 budget request slashed planned Super Hornet purchases from 60 to 24 between fiscal years 2022 and 2024, a move that would save $4.5 billion for the NGAD program amid growing budget constraints.

Indeed, those budgetary concerns have led to increased scrutiny over the sixth-generation fighter effort, leading to recent reductions in research funding for the NGAD program and potential limitations in future funding for the project ahead of an independent Pentagon cost assessment and analysis, both of which suggest that the Navy may not have actually ended up with funding to develop a brand-new fighter from scratch.

With budgets on lawmakers' minds, concerns over throwing money at a brand-new aircraft are totally understandable: after all, the trillion-dollar F-35 is still suffering from hundreds of unresolved design flaws that, according to a non-governmental watchdog report, the Pentagon has “no plan” to ever correct.

Of course, none of these deficiencies are preventing the Pentagon from actually deploying the F-35. According to Aviation Week, a dozen F-35As were sent to the Middle East last year to support operations against ISIS and deployed 150 weapons over the course of roughly 7,300 hours flown over 1,300 combat sorties.

But the F-35 program is expected to cost $1.5 trillion over its 55-year lifespan, with hundreds of jets in service across the Air Force, Marine Corps, and Navy. Despite the threat posed by a great power, does the Pentagon really need to invest in another super-expensive and consistently garbage fighter jet? Lawmakers are clearly wary of the prospect.

“I think they are going to fall back to looking at F/A-XX as a modification or an evolution of the F-35,” Clark, the naval analyst, told Defense News. “Instead of the other half of the air wing being some new aircraft, you’ll have a combination of F-35Cs and then some modified version of the F-35 or a modified Super Hornet.”

Translation: Perhaps the Pentagon won't throw billions of dollars at a brand-new flying shit heap. Then again, you never know: As the late Sen. Everett McKinley Dirksen once observed, “a billion here, a billion there, and pretty soon you're talking real money.”

Related: The Pentagon spent $300 million on defective and missing F-35 parts over the last five years, and lawmakers are furious