The USS Gerald R. Ford may be on a steady march towards its first formal deployment, but the much-vaunted supercarrier is still facing major technical problems in two of its most critical systems, according to a new assessment from the Government Accountability Office 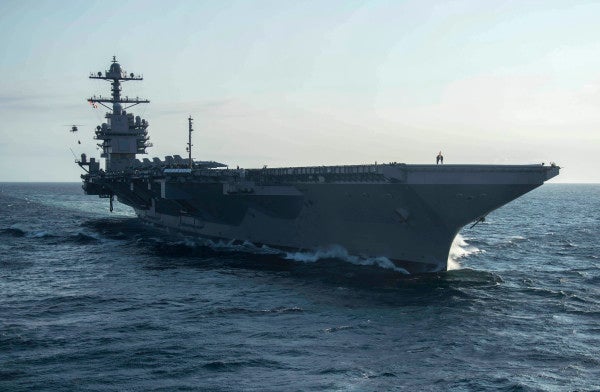 The USS Gerald R. Ford may be on a steady march towards its first formal deployment, but the much-vaunted supercarrier is still facing major technical problems in two of its most critical systems, according to a new assessment from the Government Accountability Office.

According to the GAO report, the Navy reported that all 12 of the Ford class's critical technologies were fully mature, up from nine technologies that were mature when the service took delivery of the new supercarrier in May 2017.

Although the Navy “assessed the advanced weapons elevators as mature, it ended the first post-delivery maintenance period in October 2019 with only four of the 11 elevators certified to operate,” the GAO said.

A fifth advanced weapons elevator was certified aboard the Ford in April of this year, USNI News reports.

“In the past year, Newport News Shipbuilding has turned over four of the ship’s 11 AWEs to the crew, with the ship’s force cycling each elevator approximately 20 times per day to make sure every system stays in good working order and to document sustained performance,” Navy officials said in April.

Unfortunately, that's not good enough: According to the report, “none of the elevators that operate between the main deck and the lower decks are currently operational, which means the elevators are still not capable of bringing munitions to the flight deck.”

According to the Navy, the Ford only achieved its first ordnance movement from a lower deck magazine on Tuesday.

The Navy is working to complete all elevator work by spring 2021, according to the GAO, an 18-month delay from the schedule the agency reported in 2019.

The advanced weapons elevators aren't the only critical systems facing major issues: According to the report, the  electromagnetic aircraft launch system (EMALS) and Advanced Arresting Gear (AAG) that make up the Ford's next-generation aircraft launch and retrieval capabilities are still deeply unreliable.

The EMALS system in particular was cleared for launching and recovering all naval aircraft types in February of this year, FlightGlobal reported.

“Although the Navy is testing EMALS and AAG on the ship with aircraft, the reliability of those systems remains a concern,” the GAO report says. “If these systems cannot function safely by the time operational testing begins, CVN 78 will not be able to demonstrate it can rapidly deploy aircraft—a key requirement for these carriers.”

The GAO report comes on the heels of a relatively dismal assessment of the Ford from the Pentagon's testing and evaluation arm, an assessment that revealed the supercarrier was woefully unprepared to defend itself in combat.

According to the report, published by the Pentagon's director of operational testing and evaluation in February, recent testing of the Ford's systems on a specially-designed Self-Defense Test Ship (SDTS) in fiscal year 2019 revealed “combat system deficiencies and limitations” associated with the new carrier's electronic warfare system, multi-function radar (MFR), and ship-to-ship communications equipment.

In particular, the Ford's SLQ-32(V)6 electronic surveillance system demonstrated “poor performance” so dismal that the Navy delayed additional operational testing on the system until the underlying problems could be addressed.

In addition, the Ford's SPY-3 multi-function radar and Cooperative Engagement Capability (CEC) ship-to-ship comms “failed to maintain detections and tracks for one of the threat surrogates in multi-target raid,” even though the Pentagon acknowledged that the scenario “was more challenging to the combat system than originally planned.”

So, all in all, none of the critical systems that the Ford needs to actually operate effectively in battle appear in good working order. Luckily, the Navy is throwing more money at the problem: As the GAO report notes, the Navy in September 2019 increased the Ford's cost cap by $197 million to $13.2 billion, “in part to correct deficiencies in the advanced weapons elevators.”

“This is the Navy’s third adjustment to the cost cap since 2017,” the GAO report stated. “CVN 78’s procurement costs [have[ increased by over $2.7 billion from its initial cost cap. Continuing technical deficiencies mean the Navy may still require more funding to complete this ship.”