Here’s the charge sheet of the sailor accused of setting a $1.4 billion warship on fire

“Although the fire was started by an act of arson, the ship was lost due to an inability to extinguish the fire." 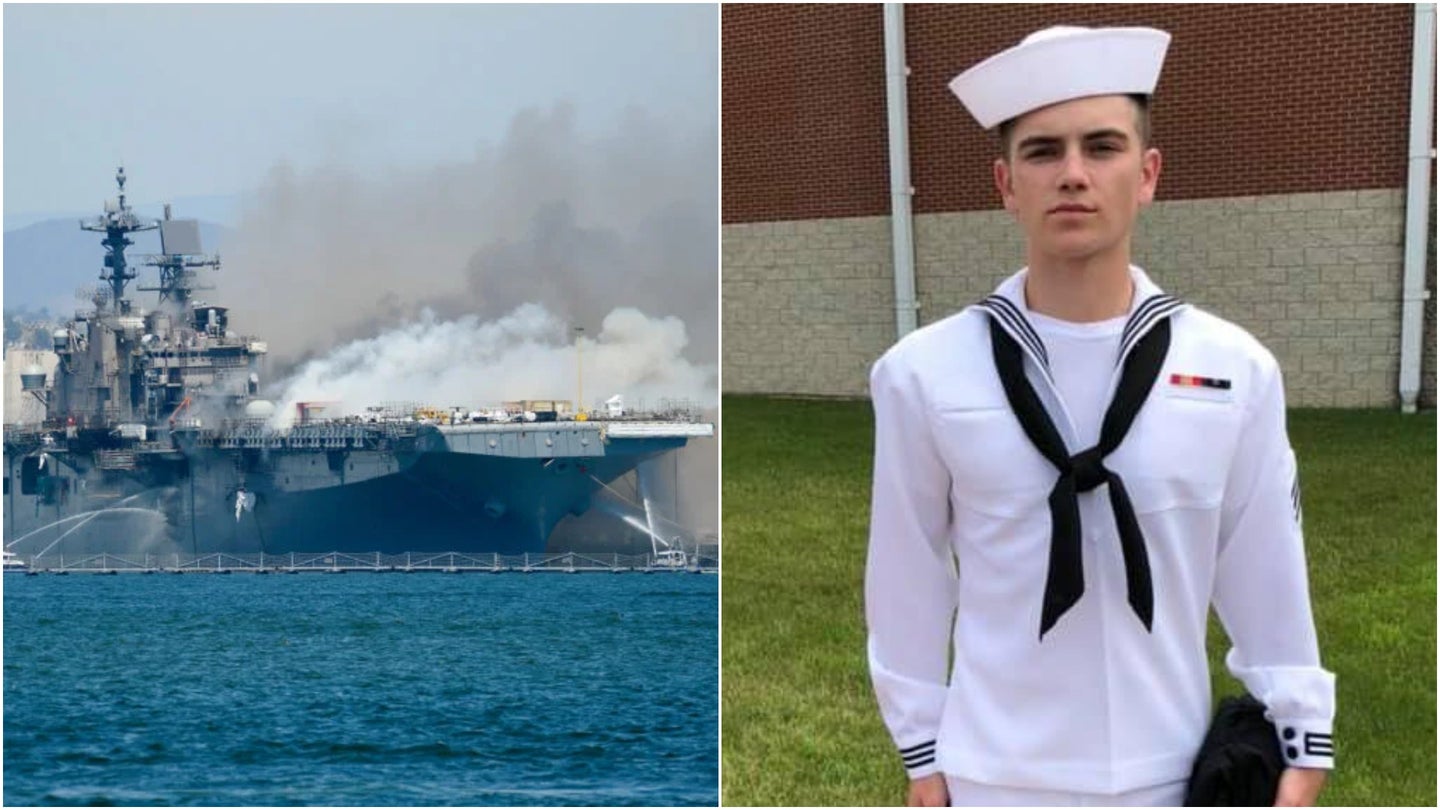 A junior sailor will face a preliminary Article 32 hearing Monday in San Diego over allegations that he set the fire that destroyed the amphibious assault ship USS Bonhomme Richard in July 2020. According to a charge sheet the Navy provided to Task & Purpose, Seaman Apprentice Ryan S. Mays, 20, is charged with violating Article 110 of the Uniform Code of Military Justice; willful hazarding of vessel; and Article 126; aggravated arson.

A member of Amphibious Squadron Five, Mays “willfully and maliciously set on fire, knowing that a human being was therein at the time,” the Bonhomme Richard, the charge sheet alleges. The charges were preferred on July 28 by Capt. Jack L. Killman of the Pacific Fleet’s Naval Air Force.

Mays’ Article 32 hearing will determine whether or not the charges against him will be referred to a court-martial. The hearing marks the culmination of a year-long investigation into the fire, which began on July 12, 2020. The fire burned for five days, damaging 470 of the 1,400 spaces on the Bonhomme Richard, according to an affidavit from the Naval Criminal Investigative Service. Seventy-one people were reportedly injured during the fight to extinguish the inferno.

First commissioned in August 1998, the Bonhomme Richard cost about $1.4 billion to build in 2019 dollars. Its crew of about 1,100 served in Operation Southern Watch, Enduring Freedom, Iraqi Freedom and several other military and humanitarian operations before the ship underwent maintenance at its home port at Naval Base San Diego about two years before the fire broke out in its lower vehicle stowage area.

Investigators found that a series of failures throughout the Navy chain of command left sailors unprepared to counter the fire, and those failures resulted in the loss of the ship.

“Although the fire was started by an act of arson, the ship was lost due to an inability to extinguish the fire,” wrote former U.S. 3rd Fleet commander Vice Adm. Scott Conn, who oversaw the investigation, according to USNI News.

“In the 19 months executing the ship’s maintenance availability, repeated failures allowed for the accumulation of significant risk and an inadequately prepared crew, which led to an ineffective fire response,” Conn said.

Conn singled out 36 individuals, including five admirals and the commander, executive officer and command master chief of the Bonhomme Richard, as having contributed to the ship’s loss. Among the shortcomings was a lack of sufficient training to counter the fire. The Navy had developed a manual known as a 8010 manual in response to losing the submarine USS Miami to arson in 2012. The manual emphasized greater caution for ships in an industrial environment, but apparently the Navy did not follow the rules laid out in the manual, USNI News reported.

“In the last 5 years, policy changes and corrective actions to address fire safety were inconsistently implemented or failed to be implemented across the Navy maintenance organization … Additionally, there was a lack of procedural compliance and effective oversight within the Naval Sea Systems Command (NAVSEA), Navy Installations Command, and Naval Surface Force Pacific Fleet,” Conn wrote.

That failure extended down to the crew of the Bonhomme Richard, investigators found.

“These personnel had a general unfamiliarity with the content of the 8010 Manual and commented that their training had not prepared them to combat a fire of the magnitude having occurred aboard Bonhomme Richard,” the report said. The result was an “unorganized” firefighting effort hamstrung by bureaucratic divisions, investigators wrote.

The service has since stood up an Industrial Fire Safety Assurance Group that will develop policies to reduce the risk of future industrial shipboard fires, according to Navy Times.

According to Navy records, Mays enlisted in the Navy in May 2019 in the hopes of becoming a Navy SEAL. He was a student at SEAL training in Coronado, California from September 2019 to March 2020, according to his official Navy record, but he washed out of the program after five days of Basic Underwater Demolition/SEAL training. Mays was then assigned to the Bonhomme Richard in March 2020.

“According to Navy leadership, the morale and behavior of sailors who had aspired to become a SEAL, and then find themselves serving in a more traditional role on a Navy ship, are frequently very challenging,” an NCIS affidavit says.

Investigators found evidence of arson after the blaze, including liquid in a bottle that tested positive for heavy petroleum distillate. It was also discovered that firefighting equipment in the area where the fire started had been rendered inoperable.

One crew member later told NCIS investigators he saw a sailor headed to lower vehicle stowage about five minutes before the fire broke out. While the crew member initially said he could not identify the man he saw, he later realized the sailor was the same height and had the same build as Mays.

The crew member also told investigators that the sailor had said “I love deck,” which is an expression that Mays used, the affidavit says.

The Bonhomme Richard’s Command Master Chief Jose Hernandez described Mays as, “a person who showed disdain towards authority and the U.S. Navy,” the affidavit said. Still, Mays denied he played a role in starting the fire.

“He maintained his innocence as to being the cause of the fire throughout the entire interview,” the affidavit said. “At one point, after being told that he had been identified as having descended the ramp to the Lower V, before the fire started, Mays stated that he was being setup.”

In August, Mays’ attorney, Gary Barthel, downplayed the NCIS affidavit in an interview with the San Diego Union-Tribune.

“The warrant is just an affidavit from an (NCIS) agent,” Barthel told the newspaper. “It’s always possible the evidence will show this warrant was not valid.”