An interesting new entry into the AR-15 market was unveiled at the National Rifle Association's annual meeting last weekend in... 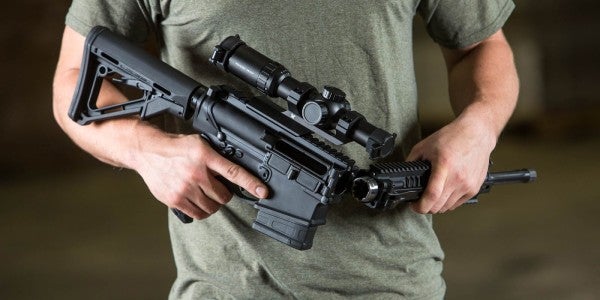 An interesting new entry into the AR-15 market was unveiled at the National Rifle Association's annual meeting last weekend in Atlanta last week. Oklahoma-based F&D; Defense rolled out an innovative folding rifle that appears to remedy one of the AR's main shortcomings.

The AR-15 has a buffer tube that extends back into its stock, which prevents the use of conventional folding-stock designs, like those seen on some AK-pattern rifles. In the past, manufacturers have addressed this by using a gas piston system, rather than the AR-15's classic direct impingement operating system; the most famous of these variants is perhaps Sig's MCX series of rifles. This removes the need for a buffer tube and allows a traditional folding stock to be fitted. Other producers, such as Law Tactical, have developed adapters that essentially separate the buffer tube and receiver, allowing a stock to fold.

F&D; Defense's XAR (Folding Automatic Rifle) comes at the age old problem from a very different angle. Instead of folding the stock, the XAR's barrel folds. F&D; claims in its press release that this will allow “the rifle to fold in half on its axis, be stowed, and then quickly deployed again.” Unlike other AR-15 takedown systems, F&D;'s is fully enclosed, with all parts of the rifle remaining connected and ready for rapid deployment.

While the system seems promising, it immediately begs the question: Does it retain its zero and accuracy? F&D; Defense claims it does, boasting of the XAR's barrel extension and receiver seat, as well as the secure lock-up provided by the latch system. While F&D; promises that “the folding mechanism is built to last the life of the rifle, and the rifle is built to last for generations.” This remains to be proven once the XAR is out in the wild for testing.

The latch system, mounted on the right side of the rifle, is set into the fore-guard and uses a levered claw that locks into the weapon's receiver. It is made from drop-forged alloy steel, and F&D; Defense claims that there is little chance of the system coming unlatched during use, noting that it requires a cartridge or spent case to lever the latch open.

The XAR’s barrel becomes the longest part of the collapsed rifle, so depending on the length of your rifle's barrel, the weapon can easily be stored in a small bag or case.

F&D;'s enclosed system is currently only being offered as a full rifle package, known as the XAR Invicta — and unlike Law Tactical's folding-stock adapter, it cannot be retrofitted into a pre-existing rifle.

F&D; Defense is best known for its AR-10 platform rifles, but the XAR will first be available in the more popular 5.56x45mm AR-15 configuration. With the AR-15 market currently inundated by rifles from dozens of manufacturers, F&D; is attempting to bring something new to the market, gambling that an innovative design will set the company apart from its rivals.

F&D; is looking to ship the rifle in the summer of 2017; exact release dates and retail prices have yet to be announced.