This year's SHOT Show saw the launch of some very interesting firearms, from the 9mm, 1911 hybrid Hudson H9 to... 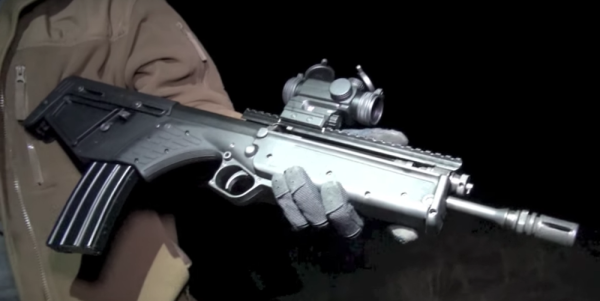 This year's SHOT Show saw the launch of some very interesting firearms, from the 9mm, 1911 hybrid Hudson H9 to the integrally suppressed SilencerCo Maxim 9 pistol. Not to be outdone, the innovative Florida-based firearms manufacturer Kel-Tec showed off a new version of its popular bullpup rifle, the RDB-Survival.

Kel-Tec is known for its unusual firearms designs, including the SUB-2000 a compact, folding pistol-caliber carbine, the high-capacity, pump-action KSG shotgun series, and more recently, its line of 5.56x45mm and 7.62x51mm bullpup rifles.

The new rifle, the RDB Survival, lacks a pistol grip and is an evolution of the California compliant RDB-C launched by Kel-Tec at SHOT 2016. However, instead of a 20-inch barrel, the Survival has a 16-inch barrel, making it ultra compact. Kel-Tec are capitalizing on the development they put into the RDB-C, improving on the design to appeal to a wider market. Compact enough to stow under a seat or strap onto the side of a pack with an overall length of just 26.1 inches, it is roughly 10 inches shorter than the average AR15 with its stock collapsed.

The RDB Survival uses much of the polymer-molded stock furniture of Kel-Tec's other bullpups; however, the magazine well now becomes the pistol grip — mimicking the wrist shape of a traditional rifle. The Survival will ship with stock folding sights, but unfortunately, the front sight looks rather ugly and somewhat ruins the aesthetics of the gun. Fortunately, the rifle has a full-length top rail, which allows the fitting of optics from small red dots to more powerful magnified scopes.

Weight-wise the Survival comes in at around 5 pounds, 2 ounces — more than a pound lighter an unloaded standard RDB with a 20-inch barrel and two pounds lighter than the RDB-C. Mechanically, the Survival is identical to the rest of the RDB series, using a long stroke gas-piston system with a rotating bolt so spent cases are ejected downwards out behind the magazine well. The Survival can also be fitted with the standard RDB's pistol grip assembly, giving owners of other versions of the rifle some configuration flexibility.

The new rifle improves on earlier RDB models by introducing a new two-position collapsible stock, which incidentally can be retrofitted to earlier rifles. The longer stock improves the rifle's length of pull when shouldered in the more traditional way. While the ergonomics of the rifle appear questionable, it is said to shoulder well and its short length and balance makes it a handy, pointable weapon.

Like the RDB-C, the Survival has a cross-bolt push button safety, a slimmer and shorter fore-end, and the standard RDB ambidextrous bolt release. The rifle abandons the standard RDB's paddle magazine release and the Survival can use any 5.56x45mm magazine, while a 10-round proprietary magazine sits flush with the magazine well.

The RDB Survival is currently in the pre-production stage. Given Kel-Tec’s infamous slowness at bringing guns to market, it is likely the rifle won't be available until later this year. Like most Kel-Tec guns, the RDB Survival will no doubt sell well when does become available, carving itself a niche appealing to hikers, survivalists, and anyone else who needs a compact, light, and handy rifle.