The Air Force Is Upgrading Its Nuclear-Weapons Systems. Here’s What You Need To Know

Since the 1980s, all three legs of the United States’ nuclear deterrent force have been kept up and running with... 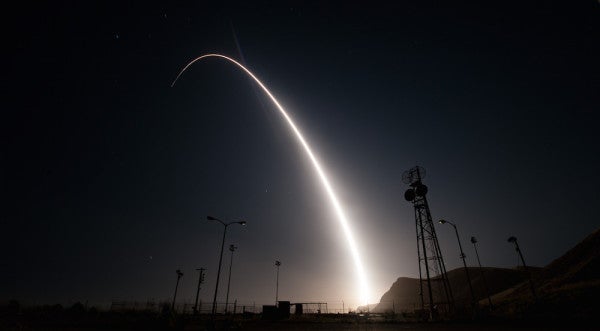 Since the 1980s, all three legs of the United States’ nuclear deterrent force have been kept up and running with regular, pricey maintenance and upgrades. But the Air Force is moving ahead with plans to overhaul the ground and air legs of the atomic triad by buying two new nuclear-capable missile systems — despite the fact that the Congressional Budget Office has estimated that nuclear purchases through 2024 could ultimately cost taxpayers upwards of $384 billion. While the service’s top brass are adamant that they need to modernize to keep American deterrence credible, critics say the branch is taking the wrong approach. Here’s a quick and dirty primer on what’s happening.

On Aug. 21, the Air Force took the its tangible step by awarding two contracts for its Ground Based Strategic Deterrent (GBSD) program to Northrop Grumman and Boeing. Just two days later, it awarded Lockheed Martin and Raytheon contracts to design a Long-Range Standoff missile (LRSO). The stated reason: The service’s nukes are really old.

The overhaul comes amid increased North Korean saber-rattling and renewed cold war tensions with Russia, but the decisions to upgrade the missile systems were made long ago — for maximum readiness, not tied to any particular political development, according to a spokesman for the Air Force.

The GBSD work, jointly awarded to Boeing for $349 million and Northrop Grumman for $328 million, is meant to ensure that the ground leg of the nuclear triad is up to snuff and ready to handle future threats. The GBSD is the follow-on program to the aging LGM-30 Minuteman III intercontinental ballistic missile (ICBM), which the Air Force says will need to be phased out in the next decade or so as technological advances make it obsolete. Although the components have seen little degradation since their development, the Air Force believes a new missile platform is preferable to maintaining one that has already outlived its shelf life by 30 years.

When it solicited bids for the GBSD in summer 2016, the Air Force also put out a request for bids on the LRSO to cover the air leg of the triad. The LRSO is intended to replace the air-launched nuclear-capable AGM-86B, which was developed in the 1980s and has long outlived its designed lifespan of just 10 years. According to an Air Force statement, the LRSO is “an absolutely essential element” of the triad.

When fielded in 2030, it’s expected to be carried by B-52, B-2, and B-21 bombers. Lockheed and Raytheon were awarded roughly $900 million apiece for the development of the LRSO.

And outside the Air Force, modernization of the triad’s third leg — the Navy’s nuclear ballistic missile submarines (SSBNs) — is already being taken up by General Dynamics, which will begin building new Columbia Class submarines to replace the Ohio generation in 2021. The Navy is also looking to extend the life of the Trident D-5 missiles that have been in service since the 1970s.

While the Air Force’s current nuclear arsenal is aging, not everyone is convinced new platforms are needed to modernize the force.

“We haven’t seen a reason why we can’t sustain the Minuteman III,” Kingston Reif, the director for disarmament and threat reduction policy at the Arms Control Association, told Task & Purpose. “Why not seek a more cost-effective way to sustain the ICBM leg of the triad instead of rushing forward with the GBSD plan?”

Reif is not the only GBSD skeptic around. Former Defense Secretary Chuck Hagel, for example, has suggested that ICBMs aren’t really meaningful to U.S. strategy anyway, and certainly not worth the expense of massive upgrades, the Daily Beast has reported.

Air Force officials, though, argue that it’s less cost-effective to continue maintaining the older system through 2050; by their account, it would actually cost less to overhaul the system now than continue with the piecemeal upgrades for the next few decades.

“The GBSD will address validated capability gaps and lower sustainment costs over the system’s lifecycle,” Joe Thomas, a public affairs specialist with Air Force Global Strike Command, told Task & Purpose. “It is an affordable, strategic ground-based system that will ensure uninterrupted operational effectiveness, provide more efficient operations, and deliver a modern weapon system that is easier to maintain and secure.” (Task & Purpose reached out to Air Force Global Strike Command for exact numbers to confirm that this is the case, but it could not fulfill T&P;'s request for information before publication time.)

Reif is skeptical. “We question that rationale,” he said. “The submarine leg can handle any target we might need to strike, and the ICBMs are merely a backup. It doesn’t make sense to move forward with the Lamborghini-level replacement for the ICBM.”

The decision to move forward with the LRSO has also garnered negative opinions from some experts, as well. In 2015, former Defense Secretary William Perry and ex-assistant secretary for nuclear Andy Weber wrote in a Washington Post column that the LRSO should be “killed.” A missile that could be “launched without warning and come in both nuclear and conventional variants,” they wrote, could lead to confusion about whether the U.S. launched a normal cruise missile or dropped a nuclear bomb — putting enemies on edge, rather than deterring them from reacting in kind.

LRSO advocates, though, see much more potential upside in the missile’s development — and greater hazards in the status quo. “The additive and unique capability provided by LRSO in conjunction with our long-range penetrating bomber force enhances deterrence to avoid a nuclear exchange,” retired Air Force Lt. Gen. David Deptula told the Cipher Brief. “Nuclear deterrence is the most cost-effective investment the U.S. government can make. Failing to deter nuclear conflict would impose existential costs in ways much more horrific than a very small fraction of the federal budget.”

“Can you imagine a nuclear capability without the most responsive element?” Hyten asked in a briefing with reporters. He added that a credible ICBM force was a key to deterring U.S. enemies, because it represented “400 separate ICBMs that have to be targeted, with multiple weapons at a time, in the middle of the United States, in order to defeat that side.”

Deptula puts forth a similar argument for the LRSO and other air-launched nuclear platforms, saying they offer the most flexibility because of their range and rapid deployability.

“Only a robust stealth long-range sensor-shooter force consisting of B-2s and B-21s will have the ability to fly from the continental United States to any location on the planet in a matter of hours; penetrate into highly defended enemy airspace; and find, fix, and successfully destroy both hardened and mobile targets,” Deptula said in his Cyber Brief interview.

But it’s the combination of all three legs that is truly meant to deter enemies from threatening the world with nuclear war — the last being the submarine.

The U.S.’s 12 Ohio-class missile submarines, which were first deployed in 1981, will reach the end of their lifespans between 2027 and 2040. But the Pentagon already has plans to begin replacing the Ohio class by 2031 with a ballistic missile submarine that has been dubbed the Columbia class.

It fires off Trident D5 missiles, 1970s-era nuclear weapons that were upgraded in the 1990s to last until 2027. But the Navy is looking for ways to extend their service life for 25 more years, Scout.com reported.

That’s a different tack from the Air Force’s drive for new gear. “Things just wear out, and it becomes more expensive to maintain them than to replace them,” Secretary of the Air Force Heather Wilson said in a press release on Aug. 21. “We need to cost-effectively modernize.”