A Brief History Of The Military’s Unsightly ‘Birth Control Glasses’

Somehow, the iconic eyewear has gone from reviled standard-issue gear to hot commodity. 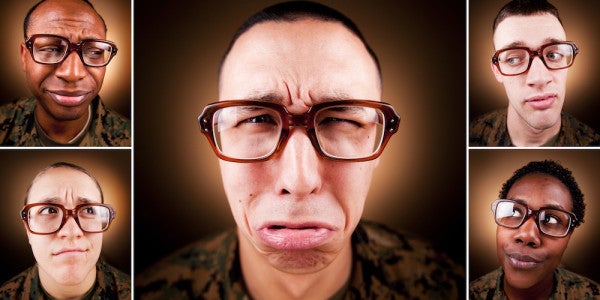 Anyone who served in the U.S. armed forces in the last half-century or so is likely familiar with the standard-issue GI eyeglasses. With thick brown rims and lenses that looked like magnifying glasses, they were so unattractive that wearing them effectively reduced the chances of getting laid to near zero.

The S9s, more commonly known as “birth control glasses” or BCGs, were issued to U.S. troops for decades until 2012, when officials at the Department of Defense realized their iconically awful prescription eyewear actually functioned as a major cockblock for thousands of libidinous service members who would rather be blind than wear such atrocious spectacles.

Over the last five years, the Pentagon has gradually switched to the smaller, black-rimmed 5A glasses that take us back to an era when wannabe punk rockers everywhere donned the spectacles to look fly. But around the same time military scrapped the ghastly S9s, those civilian punks who made black-rimmed glasses popular in the first place grew up, got jobs, and reinvigorated the market for what appear to be overpriced military-style BCGs.

Those chunky glasses have become so mainstream that you can actually purchase them at *such classy* eyewear purveyors from Lenscrafters to Warby Parker. One site even refers to them specifically as BCGs, with specific reference to the military.

(If you’re looking for authentic BCGs, there are sites across the internet, including Etsy and Ebay, where you can buy vintage military-issue S9s.)

It’s worth noting, of course, that the BCGs weren’t designed solely for a government-sponsored abstinence program.

The original BCGs were introduced during World War II, when, amid frantic recruiting for the Allied campaigns in Europe and the Pacific, the Army accepted tons of soldiers with bad eyesight. An officer by the name of Lt. Col. F. C. Tyng, who was commanding Fort McClellan in Alabama, wrote in a June 5, 1941 letter that 75 men under his charge had their glasses broken and couldn’t afford to purchase new ones, according to Army Office of Medical History records.

“In less than a month, on recommendation of the Surgeon General, the Medical Department was directed to provide spectacles, repairs, and replacements to all military personnel needing them,” records show.

To address the problem, the Army had decided it would need to develop its own glasses, and the department originally sought options from nine suppliers. After recognizing the difficulty of maintaining nine different vendor contracts, the Army decided on American Optical Co. to deliver 200,000 pairs of glasses to needy soldiers.

After a few months, however, the company failed to produce the quantity and quality needed by soldiers, and the Army selected Bausch & Lomb Co. instead. But the Army’s request was grossly below the actual need. “It had been estimated that 250,000 pairs would be required in 1943. [Overall] 2,250,000 pairs were issued,” Army records show.

The first pair of Army glasses consisted of metal, including nickel and silver. But after World War II, the Army made the switch to silver cellulose acetate frames until 1968, after which the military made the switch to black cellulose acetate frames. In the mid-1970s, the branch finally introduced the now-infamous brown acetate “S9” spectacles that remained in service until 2012.

We can’t fathom how many GIs were denied every living being’s God-given right to violently shed their virginity because of a half-century of BCGs. But somehow, the iconic eyewear has gone from reviled standard-issue gear to hot commodity. So if you’ve still got a pair, throw those babies on; after decades in the BCG doghouse, you might finally be considered one, too.