2017 was a big, big year for military fashion, from the end of the Army’s legendary gray PT uniform to... 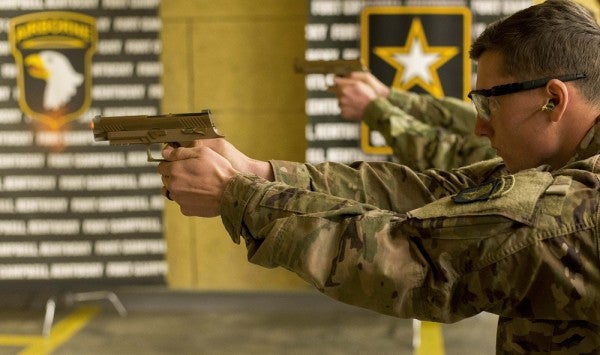 2017 was a big, big year for military fashion, from the end of the Army’s legendary gray PT uniform to the embarrassing $94 million in forest camo that Uncle Sam ordered up for Afghan soldiers in largely forest-free Afghanistan. But with the Army’s latest four-year uniform transition period now winding down, 2018 will be an even bigger year for soldiers as the branch fields its latest gear and weapons upgrades.

So what will be the things they carried in 2018? Here’s a brief guide to all the swag headed downrange next year

After a turbulent year, the Army finally began fielding the M17 and M18 pistols picked up for the new Modular Handgun System program at the beginning of 2017. The branch rolled out the new sidearms to soldiers of the 101st Airborne Division at Fort Campbell, Kentucky, on Nov. 28, with plans to issue the weapon Army-wide over the next 10 months, beginning with team leaders.

But it’s not just new pistols rolling out to soldiers. A spokesman for the Army’s Project Executive Office Soldier told Task & Purpose that the branch has upgraded a total of 241,361 M4s to M4A1s, half of the roughly 483,000 upgrades envisioned under the service’s M4 Product Improvement Program. The Army plans to have all those upgrades completed by the end of 2018. (No word yet on when the branch’s new 5.56mm body-armor-defeating ammo will be ready to go, though.)

The Special Operations Peculiar Modification (SOPMOD (Block I)) kit was developed by United States Special Operations Command (SOCOM) and consists of a number of components, allowing the M4A1 to be highly customizable depending on specific mission requirements.Chart via DoD

The Army has also approved 1,111 M3E1 recoilless rifles as a lighter replacement for the standard 84mm M3 Multi-Role Anti-Armor Anti-Personnel Weapon System (MMAAWS) — better known as the M3 Carl Gustaf — after more than a year of tests for the upgraded bazooka.

Soldiers with the 25th Infantry Division in Hawaii tackle obstacles in February 2017, while evaluating a new, lighter-weight uniform.Photo via DoD

The Army announced in October that it planned on fielding the lightweight Improved Hot Weather Army Combat Uniform “within a year.” The first lucky soldiers to break in the uniform — which sacrifices extra fabric and pockets for an airy feel — will be in the Hawaii-based 25th Infantry Division, which has also been testing 30,000 pairs of New Army jungle boots since March. (Read more on those kicks down below.)

Officials plan to issue 65,000 pairs of the new (four sets to each soldier) to the rest of the 25th ID by January, but the IHWU won’t just be reserved for jungle deployments: According to PEO Soldier’s Brig. Gen. Brian P. Cummings, the branch wants to make the new uniform available for purchase by all troops through military retail outlets.

The Army selected Belleville Boot Company and Rocky Boots back in December 2016 to produce more than 36,000 pairs of the branch’s new-pattern Jungle Combat Boots. After service fielded 9,000 pairs of the boot’s first iteration to the 25th ID’s 2nd and 3rd Brigade Combat teams for testing between March and August, the branch started testing updated designs in August with the intent of rolling them out to troops alongside the IHWU in January 2018.

As of November, Army officials planned on rolling out the new Modular Scalable Vest (MSV), a major component of the next-generationSoldier Protection System, by summer 2018.

The MSV is part of a torso and extremity protection system (TEP) comes with a scalable vest, ballistic combat shirt, pelvic protection system, and battle belt; altogether, the MSV is a whole 5 pounds lighter than the current improved outer tactical vest — and it’s more adjustable to new mission requirements.

The Army is still working on an Integrated Head Protection System to replace the existing Enhanced Combat Helmet — it and likely will be until 2020 at the earliest. But the branch did unveil spiffy new eyewear: Transition Combat Eye Protection, glasses that automatically switch to a darker or brighter tint, depending on light levels.

As Task & Purpose reported in July, the Army expects to have 47,000 Enhanced Night Vision Goggle III kits as early as the third quarter of fiscal 2018, to gift soldiers with improved visibility in low-light settings and poor weather conditions. When will those goggles actually make it onto the faces of troops downrange? It remains to be seen.

Everyone and their mother lost their minds when a handful of soldiers were spotted rocking these brand new uniforms, reminiscent of the branch’s World War II-era “pink and green” service dress, at the Association of the U.S. Army’s October conference in Washington. Prototypes got tested in December, and it’s likely the branch will start doling out the new dress uniforms to lucky soldiers sooner, rather than later — especially given Sgt. Maj. of the Army Dan Dailey’s enthusiasm for the new duds.

Lol, no. U.S. Special Operations Command said in February that it planned on actually testing the Tactical Assault Light Operator Suit (TALOS), a 21st century suit of electronic armor lovingly referred to as the “Iron Man suit.” But given the DoD’s track record with futuristic moon-shot projects, chances are the only next-gen suit soldiers will don in 2018 will be the pink-and-greens.