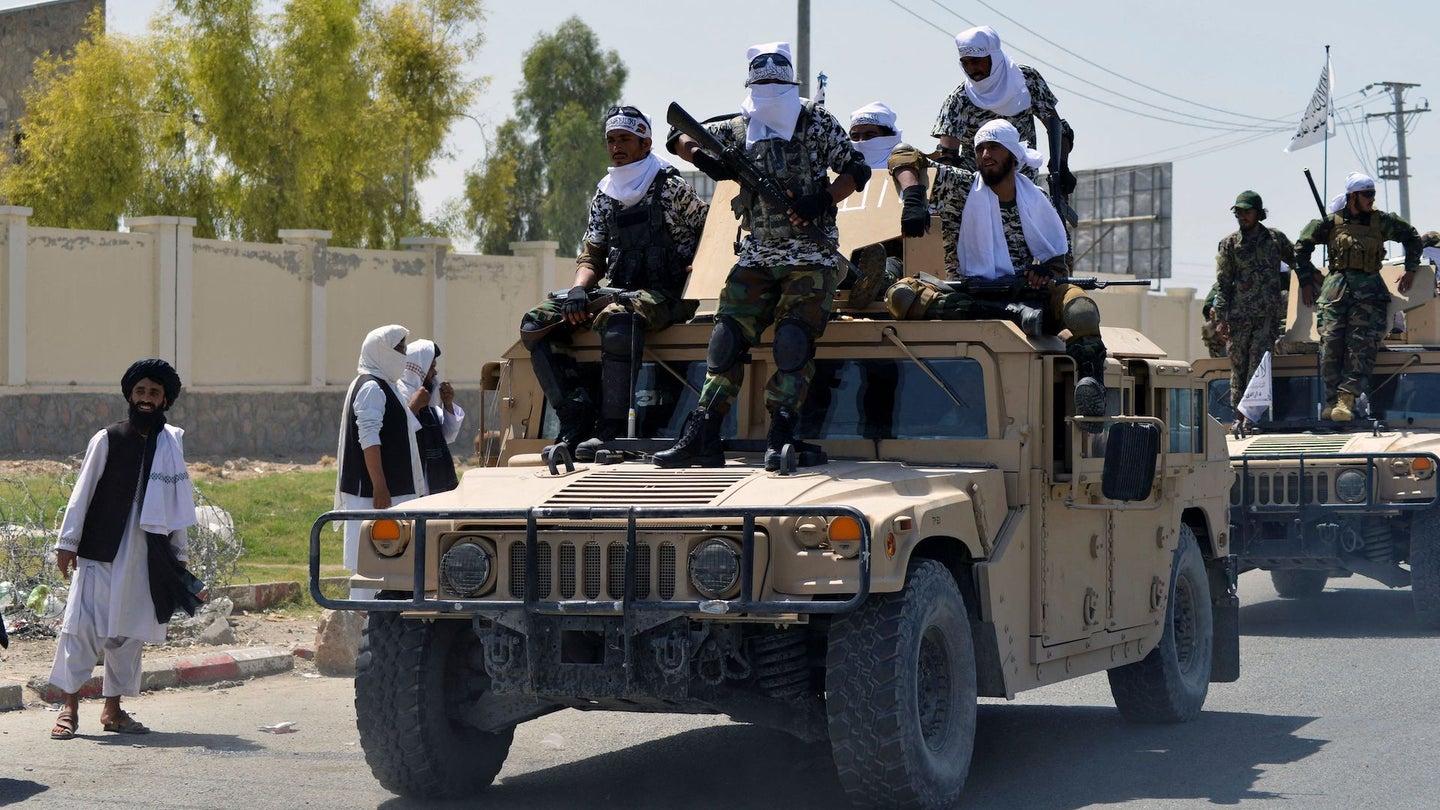 Taliban fighters atop Humvee vehicles parade along a road to celebrate after the US pulled all its troops out of Afghanistan, in Kandahar on September 1, 2021 following the Talibans military takeover of the country. (Photo by JAVED TANVEER/AFP via Getty Images)
SHARE

As Taliban fighters encircled Afghanistan’s capital of Kabul during the U.S. military’s harried withdrawal from the 20-year war there last August, the Biden administration admitted that the militant group had captured a significant amount of military equipment originally provided to the Afghan security forces, although officials couldn’t say for sure how much.

“We don’t have a complete picture, obviously, of where every article of defense materials has gone but certainly, a fair amount of it has fallen into the hands of the Taliban,” White House National Security Adviser Jake Sullivan said during an Aug. 17, 2021 press conference.

One year later, a scathing new Defense Department audit has determined exactly what “a fair amount” entails — and the results are alarming, to say the least.

According to a report by the Pentagon’s lead inspector general for Operation Enduring Sentinel and Operation Freedom’s Sentinel, the DoD estimates that roughly $7.12 billion in U.S.-funded military equipment — including “​​military aircraft, ground vehicles, weapons, and other military equipment” — was still in the inventory of the Afghan National Defense and Security Forces (ANDSF) when the central government in Kabul collapsed last year.

That $7.12 billion figure is roughly 38 percent of the $18.6 billion allocated for the procurement of weapons and equipment for the ANDSF between 2005 and 2021, according to the DoD report.

This total “included military aircraft valued at $923.3 million … as well as aircraft munitions valued at $294.6 million,” according to the report. “Of the $7.9 billion spent on procuring ground vehicles for the Afghan forces since 2005, vehicles worth approximately $4.12 billion were still in their inventory when the former government collapsed, including HMMWVs, MRAPs, and other tactical vehicles.”

Most of the larger articles of defense materials were “demilitarized and rendered inoperable during the evacuation,” according to the DoD Inspector General report, and even those that weren’t are unlikely to end up serving the Taliban in the long run due to a lack of logistical support, spare parts, and necessary training among Taliban forces to, say, keep captured UH-60 Back Hawk helicopters in the air for longer than a few hours.

However, the same can’t necessarily be said for the hundreds of thousands of rifles, pistols, rocket-propelled grenade launchers, and other small arms and light weapons whose “operational condition was unknown” when they were seized by the Taliban amid the collapse of the ANDSF, to say nothing of the night vision devices, surveillance equipment, and other ancillary gear transferred to Afghan security forces during the 20-year war.

It’s worth noting that this analysis may be a woefully inadequate underestimate of the amount of military equipment that fell into the Taliban’s hands during the fall of Kabul. Indeed, according to a 2017 Government Accountability Office report, the U.S. military funneled around 75,898 vehicles, 599,690 weapons systems, and 208 aircraft to the ANDSF between fiscal years 2003 and 2016 alone, with a 2020 Special Inspector General for Afghanistan Reconstruction analysis tracking an additional 7,000 machine guns sent to the ANDSF in recent years.

And American weapons falling into the possession of the militants they were intended to be used against is, sadly, a feature of the U.S.-led military intervention in Afghanistan rather than an exception. A damning 2014 SIGAR report indicated that, of the 474,823 weapons provided to the ANDSF as of December 2013, roughly 43 percent were missing and had likely ended up in the hands of the Taliban, ISIS, or some other militant group, not to mention all the ammo missing from former Afghan government stockpiles.

The loss of all these weapons to the Taliban is an almost fitting, if depressing, coda to the 20-year war there. Taliban propagandists have always touted captured weaponry — including rare weapons like the U.S. special operations forces FN-SCAR  — and the Taliban fighters who marched into the Afghan presidential palace after then-Afghan President Ashraf Ghani fled the country were no exception, boasting American M4s as they marked the end of the American presence there.

But the most depressing aspect of America’s accidental export of arms to Taliban-ruled Afghanistan is, perhaps, how blindsided the Biden administration was by how it went down.

“We are always worried about U.S. equipment that could fall into an adversaries’ hands,” then-Pentagon Press Secretary John Kirby said during the fall of Kabul when pressed on the issue. “What actions we might take to prevent that or to forestall it, I just simply won’t speculate about today.”