Stanley McChrystal, the former commander of NATO forces in Afghanistan, recently told Secretary of State Mike Pompeo that he did... 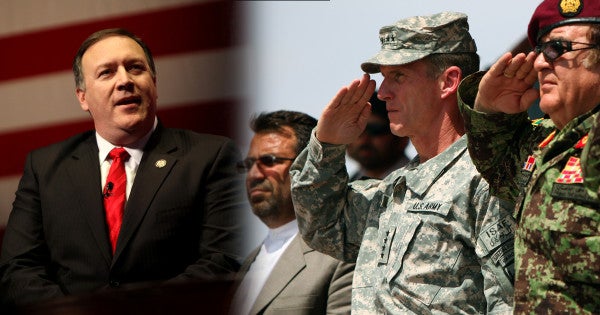 Stanley McChrystal, the former commander of NATO forces in Afghanistan, recently told Secretary of State Mike Pompeo that he did not know what to do in Afghanistan but offered his “best suggestion” was for a small number of troops to remain and “muddle along” in the country, the retired four-star Army general told a small group last month during his book tour.

Although McChrystal, 64, mostly kept to a prepared presentation analyzing different military leaders through history during an hour-long talk in New York City on Nov. 26, he offered the surprisingly candid admission in response to an audience member’s question on the path forward in Afghanistan, according to an audio recording of McChrystal’s talk obtained by Task & Purpose.

“I met with Secretary Pompeo this morning and he asked me the same question, and I said, ‘I don’t know.’ I wish I did. If I had a clever answer… if we pull out and people like al Qaeda go back, it’s unacceptable for any political administration in the U.S. It would just be disastrous, and it would be a pain for us,” McChrystal said of a potential drawdown for the war in Afghanistan, now in its 17th year.

“If we put more troops in there and we fight forever, that’s not a good outcome either. I’m not sure what the right answer. My best suggestion is to keep a limited number of forces there and just kind of muddle along and see what we can do,” he said.

“But that means you’re gonna lose some people, and then it’s fair for Americans to ask, ‘why am I doing this? Why am I putting my sons and daughters in harm’s way?’ And the answer is, there’s a certain cost to doing things in the world, being engaged,” McChrystal said. “That’s not as satisfying. That’s not an applause line kind of answer, but that’s what I think, the only thing I could recommend.”

In a phone call with Task & Purpose on Wednesday, McChrystal declined to further expand upon what he meant by those remarks. A State Department spokeswoman declined to comment.

Marine Lt. Gen. Kenneth McKenzie, who has been nominated to take over U.S. Central Command, testified to the Senate on Tuesday that the Taliban had an estimated strength of 60,000. There are currently more than 20,000 U.S. and coalition troops there in support of more than 300,000 Afghan soldiers and police.

In the same hearing, McKenzie admitted that Afghan security forces would not “be able to successfully defend their country” if left without coalition support, despite more than $70 billion spent since 2002 to train and equip Afghan troops.

Although the war in Afghanistan has largely faded from public consciousness some 17 years after the campaign kicked off, the death of Army National Guard Maj. Brent Taylor, a Utah mayor, garnered national attention in November. The 39-year-old father of seven was killed on Nov. 3 by one of the Afghan commandos he was training. Army Ranger Sgt. Leandro Jasso was killed in action on Nov. 24, and three special operations troops were killed in an IED blast on Nov. 27 (a fourth service member later died on Dec. 2 from wounds sustained in the Nov. 27 strike).

President Donald Trump has been considering whether to withdraw all U.S. troops from the country by 2020, according to a recent NBC News report. The prospect of a full drawdown comes as Zalmay Khalilzad, the U.S. Special Envoy to Afghanistan, has met multiple times with Taliban negotiators in an attempt to settle the war, which a number of U.S. officials now describe as a stalemate.

During last month’s talk, McChrystal also discussed the problem of drug production in Afghanistan, where farmers had to choose whether to produce opium or other crops. The economic incentive of growing poppy was difficult to overcome, he argued.

“They’re just caught in this incredible, difficult web, and there’s not much they can do about it,” McChrystal said of Afghan farmers.

“Long term we’ve got to create more options where they make as much or more money the other way. There’s just no other way. The real problem with the opium is that it produces corruption. It puts money into corruption, which corrodes the whole government. Suddenly everything is tainted.”

McChrystal served as the commander of the International Security Assistance Force in Afghanistan from June 2009 to June 2010. In his initial 66-page assessment of the war, leaked to The Washington Post in Sep. 2009, McChrystal warned that he needed more troops to overcome the momentum of the Taliban or risk an outcome “where defeating the insurgency is no longer possible.”

“While the situation is serious, success is still achievable,” he wrote in his commander’s summary.

The following year, he resigned from his ISAF post soon after an article published in Rolling Stone revealed that he and his aides had disparaged senior members of the Obama administration.