“If, like me, you find yourself trying to put your own experiences into some context which will allow you to move forward ... I urge you to talk." 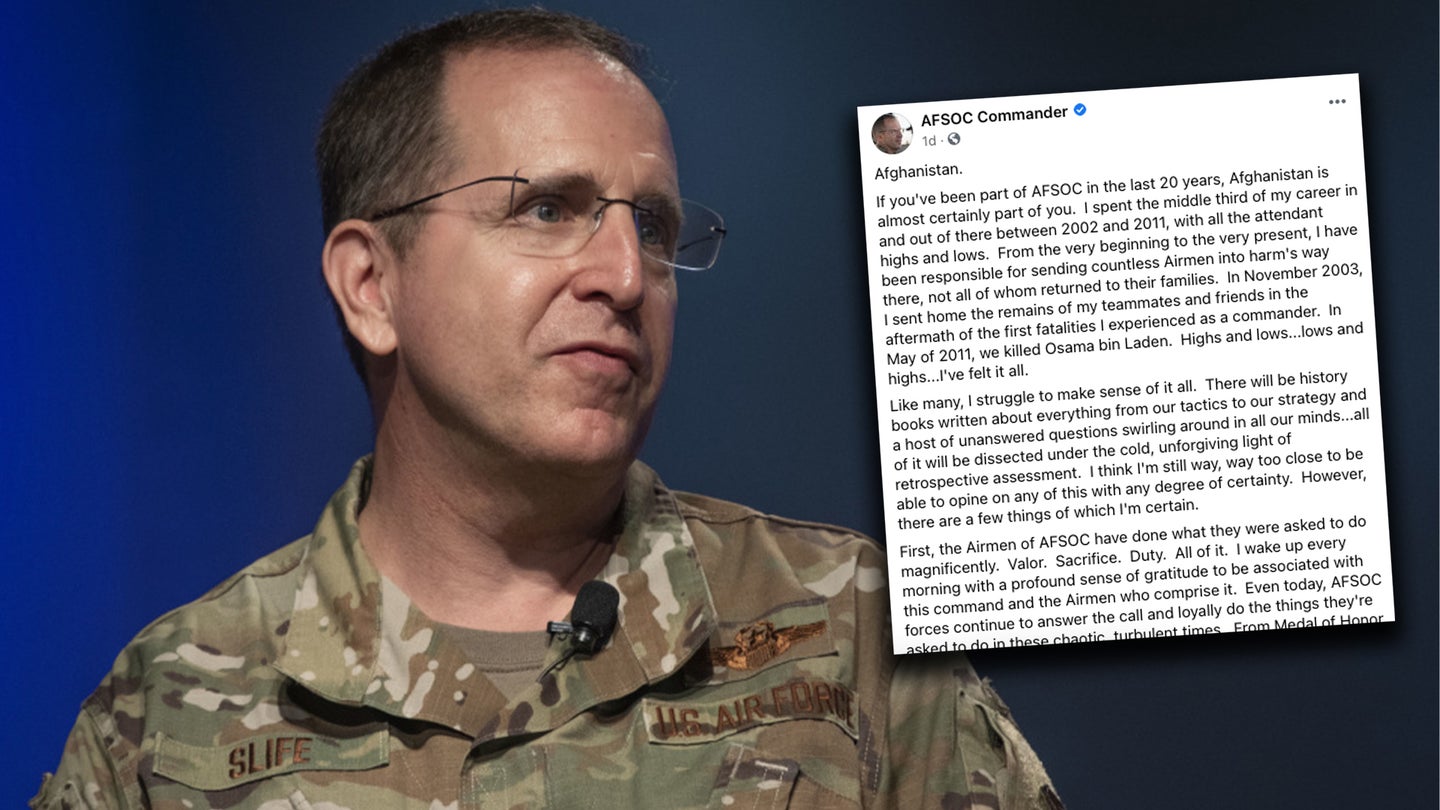 As the world watched the Taliban re-conquer Afghanistan over the weekend, Lt. Gen. James “Jim” Slife, the head of Air Force Special Operations Command, took to Facebook to share his complicated feelings on the tragedy. Little did he know, he captured the same brew of emotions that thousands of other veterans, service members and civilians felt upon seeing the collapse of a country the United States has worked so hard to build over the past two decades.

“Like many, I struggle to make sense of it all,” Slife wrote on Sunday, in a post that received nearly 5,000 likes and was shared by Chief Master Sgt. of the Air Force JoAnne Bass, the top enlisted leader in the Air Force, and the popular Facebook page Air Force amn/nco/snco.

“There will be history books written about everything from our tactics to our strategy and a host of unanswered questions swirling around in all our minds … all of it will be dissected under the cold, unforgiving light of retrospective assessment,” Slife added.  “I think I’m still way, way too close to be able to opine on any of this with any degree of certainty.”

Slife’s own experience in Afghanistan was complicated, and filled with “highs and lows,” he said. The commander explained that he spent the middle third of his career “in and out of there” between 2002 and 2011. Along the way, he sent “countless airmen into harm’s way there, not all of whom returned to their families.” And in November 2003, Slife personally “sent home the remains of his teammates and friends in the aftermath of the first fatalities” he experienced as a commander.

Four airmen and one soldier were killed and seven people were injured in that crash, where a MH-53M Pave Low helicopter dubbed “Beatle 12” went down near Bagram Air Base on Nov. 23, 2003, according to press reports. The Air Force blamed the crash on an engine failure.

At the time, Slife, a Pave Low pilot himself, was the director of operations for the 20th Special Operations Squadron. He posted a photo of himself standing in front of the headstone of the service members who died in that crash: Air Force Maj. Steven Plumhoff, Master Sgt. William Kerwood, Tech Sgt. Howard Walters, Staff Sgt. Thomas Walkup Jr., and Army Sgt. Maj. Phillip Albert. But while that day was one of the lows, there were highs too. The killing of Osama bin Laden was one of them, Slife said.

“Highs and lows…lows and highs…I’ve felt it all,” the airman wrote.

Some might feel that it was all for naught, since the Taliban control Afghanistan again, the Afghan National Army evaporated, and the Afghans who helped Americans are stranded in the country. But Slife said that one of the few things he knew for certain about Afghanistan was that the men and women under his command did all they could to help the war there succeed.

“[T]he airmen of AFSOC have done what they were asked to do magnificently,” Slife said. “Valor.  Sacrifice. Duty. All of it. I wake up every morning with a profound sense of gratitude to be associated with this command and the airmen who comprise it.”

Specifically, the commander called out Master Sgt. John Chapman, the Air Force combat controller who was posthumously awarded the Medal of Honor for his last stand protecting his teammates against Al Qaeda fighters in 2002. Slife also noted a “still-serving squadron commander currently on his 19th deployment,” though it was not clear which squadron he was referring to.

“Even today, AFSOC forces continue to answer the call and loyally do the things they’re asked to do in these chaotic, turbulent times,” Slife said.

Still, the commander warned that “there will be many hard days … months … years” ahead as he and others reflect on Afghanistan, “often with deep ambivalence.” On top of that, many people who served there have physical, neurocognitive, psychological and moral wounds to cope with. That’s the part we will have to work together on, he said.

“If, like me, you find yourself trying to put your own experiences into some context which will allow you to move forward positively and productively, I urge you to talk about it,” Slife wrote.

That talk could be with chaplains, psychologists or physicians, and Slife rattled off a list of places to find those resources, including the Veteran Affairs Administration, the local chapel, or, for actively serving airmen, the Mental Health clinic at Medical Group, the Airman and Family Readiness Center, or Military OneSource.

“While there is no ‘one size fits all,’ answer, there is a size which fits,” Slife wrote. “We’ve been through too much together as an AFSOC team to try to process these very complex things on our own.”

Though Slife is an Air Force special operator, his message resonated with airmen of many other stripes, including the service’s top enlisted leader, Chief Master Sgt. of the Air Force Joanne Bass. Bass thanked Slife “for putting into words the feelings of many.”

Both the chief and her husband did tours in Afghanistan “and have deep emotions at what has transpired,” she wrote. “Over the past few days I’ve found myself thinking about the people I served with, the mission I carried out…and the friends I lost.”

“We owe it to our fallen brothers and sisters to come together now, more than ever, and see this through,” she added, though it was unclear what she meant by “this.”

Bass was not alone, as hundreds of others gathered in the comments sections to share their thoughts and feelings about America’s last days in Afghanistan.

“I am just a spouse, I didn’t go overseas, I didn’t experience first hand, but I am shaken and ANGRY,” wrote one commenter. “I am angry for all those that served, I am angry for all the families that sacrificed … I am glad I saw this post-I know we are not alone trying to sort this all out.”

“Thank you Lt Gen Slife. Your words definitely hit home,” wrote another. “Yes, it was the best of times and the worst of times. All we have left is each other knowing we did as we were called to do.”

Still, another commenter said he was grieving the sense that his service, his wounds and those of his friends had been for nothing.

“I wanna close my eyes and wish this wasn’t happening,” he wrote. “My sacrifices, damage (mentally and physically), and 21 years of service to the long-term goal seems wasted, and torn apart.”

But he wasn’t alone, as others reminded him. One commenter said she could relate to the mixed emotions, since her husband is facing “his fifth major spinal surgery soon from his injuries there,” she said.

“All I can say is just know you are not alone in your feelings and bless you for your service,” she said.