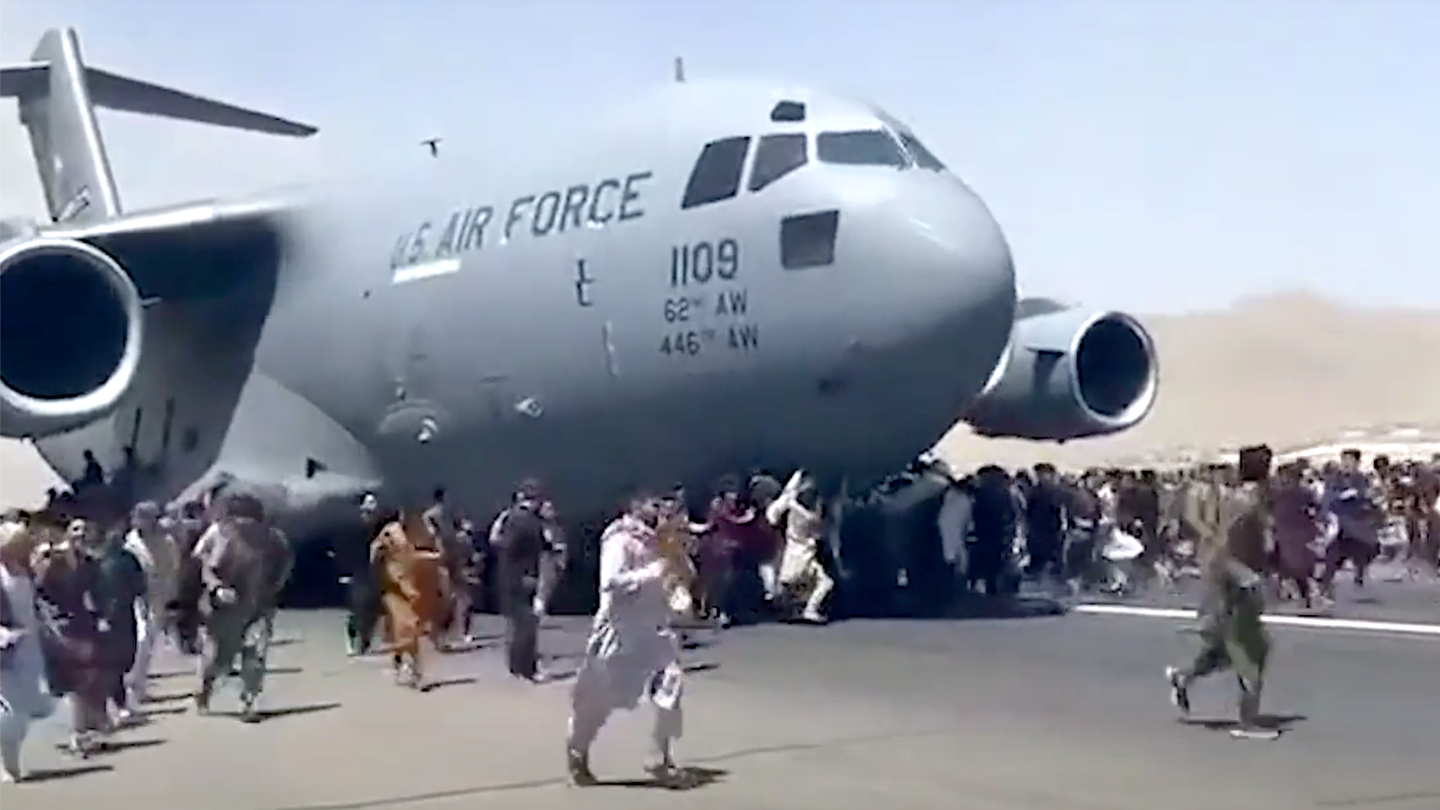 As the U.S. Air Force C-17 Globemaster II climbed into a perfectly blue sky, two black dots fell away from the plane.

These were two Afghans who were so desperate to escape the Taliban’s advance on the capital city of Kabul that they had tried clinging to the wheels of the aircraft as it took off from Hamid Karzai International Airport.

Their deaths were captured on videos that have been widely shared on social media. Task & Purpose is not embedding them in this story.

Another video shows a large crowd of Afghans running along the C-17 as it was preparing to take off with more than half a dozen men on top of the moving plane’s wheel well.

Stars and Stripes reports that Afghans saw between three and four Afghans plummet from the plane. Other media outlets reported that locals heard a terrifying noise as the Afghans crashed into houses near the airport.

The Afghans who fell from the plane are among seven people believed to have been killed at the airport on Monday, according to the Associated Press.

U.S. troops at the airport have been shot at and returned fire, killing two “armed individuals” in separate incidents, Pentagon spokesman John Kirby told reporters on Monday. Roughly 2,500 U.S. troops are currently at the airport.

The ghastly spectacle comes almost 20 years after the Sept. 11, 2001 terrorist attacks, when the entire world witnessed similar scenes in New York City as innocent civilians fell from the twin towers of the World Trade Center to escape the inferno there.

Now, the same Taliban who harbored the terrorists who attacked the United States that day have won Afghanistan’s civil war, and Kabul’s international airport is flooded with Afghans who are so terrified of what’s coming that they are willing to try to hold onto a jet aircraft as it takes off.

Defense Secretary Lloyd Austin has ordered another 1,000 paratroopers with the 82nd Airborne Division to deploy to Kabul’s international airport to join roughly 5,000 troops who are already there. Their job is to make sure all Americans in Afghanistan escape – and perhaps some Afghans too.

But on Monday, the U.S. military temporarily halted the evacuation flights of Americans from Afghanistan as it tries to clear the runway of Afghan refugees, CNN reported.

Separately, CNN’s Jennifer Hansler revealed on Sunday that the U.S. government had suspended evacuation flights for Afghans with visas because it was focused on getting Americans in Afghanistan to safety.

That has not stopped Afghans from streaming towards Kabul’s airport in the hopes of getting a flight out of the country. The situation was so dire on Monday that two Army AH-64 Apache helicopters hovered low over the runway to disperse Afghans so that a C-17 could take off.

The Taliban have begun going door-to-door in Kabul looking for former Afghan government officials, police, and other members of the now defunct security forces, a reporter from Radio Free Europe / Radio Liberty Afghanistan.

The U.S. government has so far made many empty promises to evacuate Afghans who have worked for the Americans over the past two decades. Task & Purpose has received several messages from former interpreters begging for help.

One Afghan sent a video to Task & Purpose that shows the Taliban interrogating the driver of a pickup truck or sports utility vehicle.

“They are finding people,” he told Task & Purpose.