On Dec. 6th, a sea of blue flooded a sleepy township in Pennsylvania to honor Staff Sgt. Dylan Elchin, the 25-year-old... 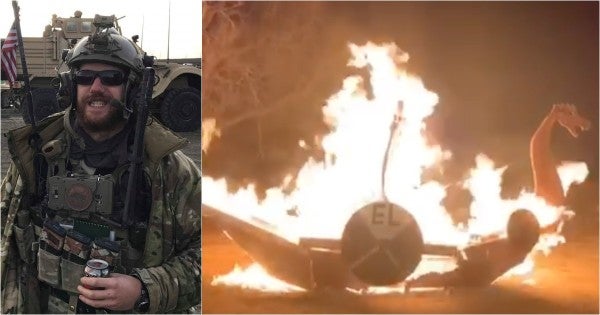 On Dec. 6th, a sea of blue flooded a sleepy township in Pennsylvania to honor Staff Sgt. Dylan Elchin, the 25-year-old airman who was killed alongside two U.S. Army Green Berets in Afghanistan in late November.

Dozens of airmen from Elchin's unit, the 26th Special Tactics Squadron based at Cannon Air Force base in New Mexico, and the 24th Special Operations Wing at Florida's Hurlbert Field, traveled across the country to Moon Township to join the fallen airman's family and pay their respects to a brother-at-arms who gave his life in the line of duty.

“His sense of duty was his prime focus,” Elchin's brother Aaron, himself an Army veteran, told CBS News. “It’s what he lived for … it was what his heart beat for.”

It was a solemn procession. But less than a week earlier, members of Echlin's squadron had assembled to honor his service in the tradition of fallen Air Force special operations forces who came before him — with one burning addition.

The Viking-age Norse ship burial commonly referred to as a “Viking funeral” is one of the oldest burial customs in human memory, a tribute reserved for only the noblest or distinct warriors.

When two members of the 26th Special Tactics Squadron learned of Elchin's death, it was the first thing that came to mind.

“After we got the news, we spent some time being sad, but we immediately thought, 'We have to honor Dylan, a true warrior,'” one special tactics airman, who spoke on condition of anonymity, told Task & Purpose.

“The whole warrior culture is very prevalent in the special operations community, and I'm sure you see these super-hard types on Twitter and Instagram and stuff,” he added. “But Dylan wasn't some Viking or lone wolf — he was a warrior professionally.”

But while AFSOC personnel like Elchin are essential on the battlefield, “people don't know that much about the Air Force side because it's not as glorified,” the airman said. He's not wrong; in August, Tech Sgt. John Chapman posthumously became the first airman to receive the Medal of Honor since the Vietnam War.

Within hours of hearing the news of Elchin's death, the airman and one other — Elchin's partner during his pre-deployment JTAC training back in 2016 — immediately got to work on an unofficial memorial to a fallen warrior: An ad-hoc Viking longship. They bought lumber and scrounged scrap wood from the area surrounding Cannon AFB, working around the clock for 36 hours.

The final result was a vessel about the height and length of a full-size Toyota Tundra.

“None of us had woodworking experience,” the airman said. “It was all trial and error.”

On the evening of Dec. 1, just days after Elchin's death in Afghanistan, a group of 80 people assembled for the pyre. Without access to a body of water, the airmen secured permission to relocate it to a nearby farm. A fire truck from the local fire department idled nearby on standby just in case the flames got out of hand.

“A lot of people came out to support — other people from the unit, their family members. It was an unofficial memorial,” the airman said.

With their family and fellow airmen assembled, an airman launched a flaming arrow into the sail of the Viking vessel, which quickly burst into flames.

Unofficial memorials are common among special operators lost since the Global War on Terror, but as far as the airman could tell, such a pyre “was not a common thing.”

What followed next, however, was far more common. As the fire burned, the assembled crowd raised their glasses in honor of Elchin, as one gave a toast:

Here's to the men that wear the beret,

Not blue, not black, not tan, not grey,

But the maroon and the red, we wear on our head,

Like the blood our brothers before us have shed,

May we all grow old together and never die,

So we may tell the stories of why we fly,

The blood, the sweat, the tears we give,

First there that others may live

“We really try to honor our teammates the best way we can … there's a huge part of our culture is the memory and remembrance of our fallen comrades who have died,” the airman said.

“Dylan … he was dedicated. He did it all for his country. He was a patriot, and he lived a simple life with purpose.”