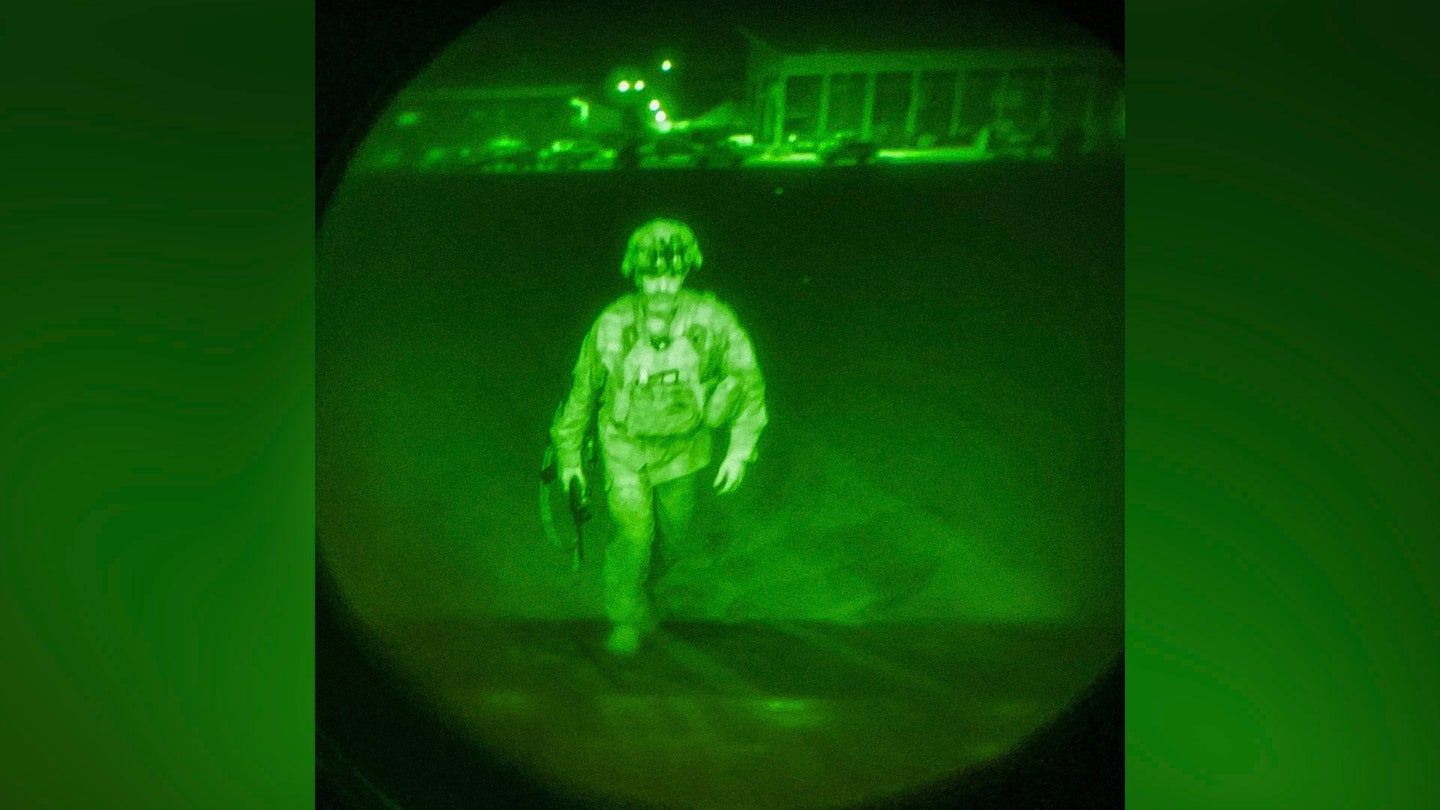 The final image of the U.S. military’s 20-year war in Afghanistan is a grainy picture taken with a night vision device of Maj. Gen. Chris Donahue, the last service member to board the last plane out of Kabul.

Donahue, the commander of the 82nd Airborne Division, made sure that all his soldiers had made it on to the C-17 Globemaster III before he stepped into the aircraft, and Army tradition dictates that the commander on the ground be the last soldier to leave the field, said Army Col. Joe Buccino, a spokesman for the 18th Airborne Corps.

It was the two-star general’s 18th deployment since he graduated from the United States Military Academy at West Point in 1992, according to his official Army biography.

In the picture of Donahue boarding the last C-17 out of Kabul though, there is no indication of his rank or prestige within the special operations community. He is just another soldier holding an M4 carbine trudging up the on-ramp.

Donahue’s decision to be the last service member to leave Afghanistan is part of the Army’s officer and leader culture, said David Cotter, director of the military history department at the United States Army Command and General Staff College at Fort Leavenworth, Kansas.

“In a field or combat environment, for example, the commander eats last, after all the soldiers have been fed,” Cotter said. “Similarly, the commander’s tank is the last to cross back into friendly areas when executing a rearward passage of lines.”

Donahue reiterated this ethos in a June 17 podcast with Buccino, in which he described how the 82nd Airborne Division is promoting a culture in which all paratroopers look out for one another.

The tight community of airborne soldiers refers to itself as “little groups of paratroopers” – or LGOPs – an homage to the heroic missions that paratroopers carried out behind German lines in World War II.

“There is no rank in the LGOP,” Donahue said in the podcast. “In this division, leaders jump first, eat last – always.”

On Sept. 11, 2001, Donahue was serving as the military aide for then-Chairman of the Joint Staff Gen. Richard B. Myers, who was meeting with a senator when terrorists struck the World Trade Center in New York.  At one point during that hectic morning, Donahue handed Myers his cell phone so that Myers could talk to the commander of North American Aerospace Defense Command.

Two decades later, Donahue led U.S. troops at Kabul’s airport during the chaotic evacuation of more than 123,000 people after Afghanistan’s capital city fell to the Taliban on Aug. 15.

The mission was exceedingly dangerous. A suicide bomber attack outside the airport’s Abbey Gate on Aug. 26 killed 13 service members and more than 170 Afghan civilians. The Islamic State group in Afghanistan claimed responsibility for the attack.

Tara Copp of Defense One first reported that Donahue sent his troops a final message before the last C-17 out of Kabul took off: “Job well done, I’m proud of you all.”