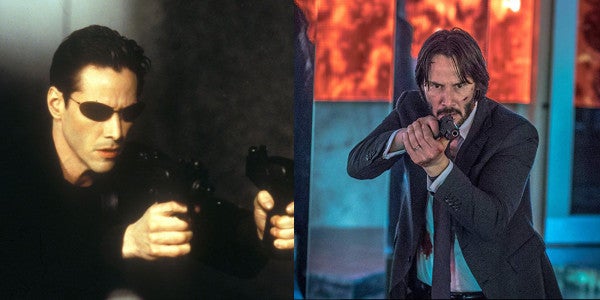 The Keanussance is upon us.

John Wick will be back and so will Neo, on the same day. According to the Hollywood Reporter, John Wick 4 and Matrix 4 will be sharing a May 21, 2021 release.

While it may seem strange that two movies starring Keanu Reeves will be competing for viewers at the box office on opening day, I for one couldn't be happier that Reeves will reprise his iconic Matrix role, even as John Wick goes ham on a bunch of bad guys on a nearby screen in the same theater.

The Matrix presented audiences with a dystopian storyline where our reality was little more than a computer simulation meant to keep humanity in check, but the movie also helped pave the way for a totally new kind of action flick, one defined by hyper-stylized violence and rooted in technical training and extraordinary stunt work.

Some of the same people behind that, like Chad Stahleski have continued to move that ball forward. Reeves' stunt-double on The Matrix, Stahleski, co-directed the first John Wick alongside David Leitch, another blockbuster stuntman-turned director (Deadpool, Atomic Blonde).

Both Leitch and Stahleski run 87-eleven, which provided training, stunt work, facilities, equipment and support for the John Wick movies.

The result is an action series where the actors aren't just playing at being shooters, or fighters, but have actually learned to do (at least some of) the things their characters are capable of.

That said, there's still a lot of behind-the-scenes work on the part of professional stunt doubles.

For those who haven't followed the John Wick series, it tells the heartwarming story of a once-retired hitman who goes on a bloody rampage to avenge the death of his dog, the theft of his car, and the destruction of his house. And then he just keeps going.

After three John Wick movies, and a fourth in the works, can you imagine what kind of gun-play and action sequences might be in store in Matrix 4?

What if, instead of a hand-to-hand melee between Neo and a thousand Agents that's heavy on computer generated roundhouse kicks and pixel-punches, Neo just comes out guns blazing, speed-reloading left and right because he got a crash course on three-gun-shooting uploaded straight to his cerebellum.

And just think of the possibilities for cross-over references? We already got a great one in the last Wick flick when Reeves delivered the iconic Matrix line “guns, lots of guns.”

Here's to hoping we'll see an enraged Neo tell the movie's villain (whoever it might be) that “Yeah, I'm thinking I'm back!“