‘Joker’ director is really annoyed that people are concerned about violence in his movie, but they don’t seem to mind it in ‘John Wick’

His argument basically amounts to: Well, what about all these ​other​ violent movies? 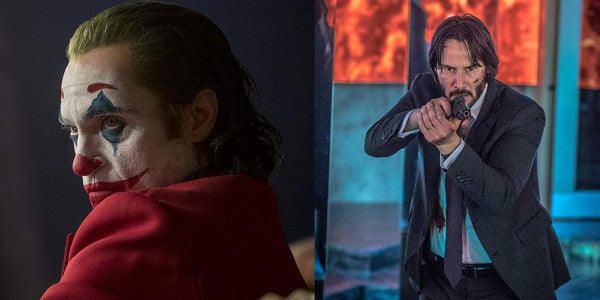 With Joker – the origin story of DC Comics' infamous psychotic clown and killer – just days away from its Oct. 4 release, director Todd Phillips is pushing back over concerns that his film may inspire violence.

His argument basically amounts to: Well, what about all these other violent movies?

“The one that bugs me more is the toxic white male thing when you go, 'Oh, I just saw John Wick 3,'” Phillips told the Associated Press in a recent interview. “He's a white male who kills 300 people and everybody's laughing and hooting and hollering. Why does this movie get held to different standards? It honestly doesn't make sense to me.”

Writer-director Todd Phillips says it isn't fair to link his #JokerMovie to real-world violence: "It's a fictional character in a fictional world that's been around for 80 years." pic.twitter.com/NcT4d9fjOQ

The John Wick series, which stars Keanu Reeves, follows a retired hitman on a hyper-stylized killing spree as he sets out to avenge the death of his dog. The John Wick films have previously faced some criticism for the franchise's heavy use of gun violence.

Joker stars Joaquin Phoenix as Arthur Fleck, a mentally ill clown and aspiring comedian who struggles to find his place in the world, but ultimately transforms into a villain by the end of the film.

The controversy around Joker has been slowly building, but it has boiled over in the last week. After Warner Bros was sent a letter from family members of some of those killed during the 2012 mass shooting at a movie theater in Aurora, Colorado during a screening of The Dark Knight Rises, the studio released a statement that the Joker “does not endorse real-world violence,” according to Indie Wire.

1. THREAD: Together with other survivors of the 2012 Aurora shooting, we wrote @warnerbros to express the grief and concern stirred up by their new Joker film. Quite frankly, we found their response lacking. pic.twitter.com/HlLch8zntr

Landmark Theaters, the largest cinema chain in the states, will be banning the wear of face masks, toy weapons, and costumes during the movie's run in theaters, Fox News reported on Friday.

Additionally, the Army vaguely warned of a potential mass shooting during the film's premiere in a Sept. 23 memo from Fort Sill, Oklahoma, which Task & Purpose previously reported.

Of the claims that James Eagan Holmes, the perpetrator of the 2012 Aurora shooting, was inspired by the DC Comics character, The Joker, Phillips told the Associated Press:

“I mean, I think that Aurora is obviously a horrible, horrible situation but even that is not something you blame on the movie,” Phillips said. “Quite frankly, if you do your own research about Aurora that gentleman wasn't even going in as Joker. That was misreported, his hair was dyed red, he was having, obviously, a mental breakdown and there's something horrifying about that but it wasn't related to it outside of the fact that it happened at a movie theater.”

Phillips added: “This is not the thing that the movie is trying to represent.”