The Latest ‘John Wick’ Trailer Has War Dogs, Suave Super Assassins, And A Gunfight On Horseback

Based on the new trailer for 'John Wick Chapter 3: Parabellum' it looks like the dogs will finally have their day. 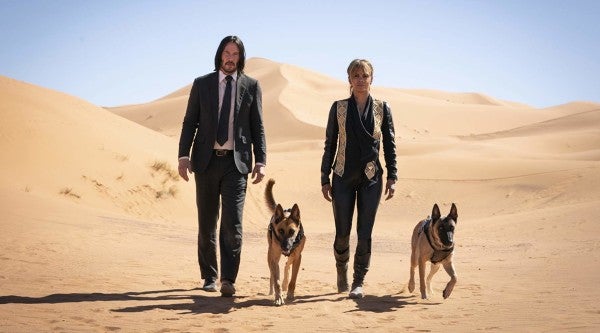 And he definitely doesn't give a damn about traffic laws, made apparent in the new trailer for John Wick Chapter 3: Parabellum.

Keanu Reeves returns as the titular assassin in the newly released trailer, galloping through a busy intersection on horseback and shooting bad guys in the face like some kind of immortal Custer whose last stand never ended, albeit with better facial hair and style.

The story picks up immediately after the events of John Wick: Chapter 2, with our dapper gunslinger excommunicated from the Continental, a network of safe harbors masquerading as high-priced hotels for hired guns. The trailer doesn't give much away about what's in store for John Wick, just that everyone and their mother is out for his blood — or at least that $14 million dollar bounty on his head.

With nowhere to run, Wick will have to shoot, stab, and kick his way to safety as he tries to escape. Fortunately, this time he'll have some backup from fellow gunslinger Sofia (Halle Berry) and her two kitted out Belgian Malinois, who leap across furniture to mangle a pair of assassins in the short promo. For a franchise that started with a revenge rampage over a slain puppy, the scene — and the prospect of more canine carnage — feels almost poetic.

When John Wick Chapter 3: Parabellum hits theaters on May 17, at least this time we know the dogs aren't in any danger, though anyone coming after Wick certainly is.