Longest-serving US commander in Afghanistan steps down amid troop withdrawal 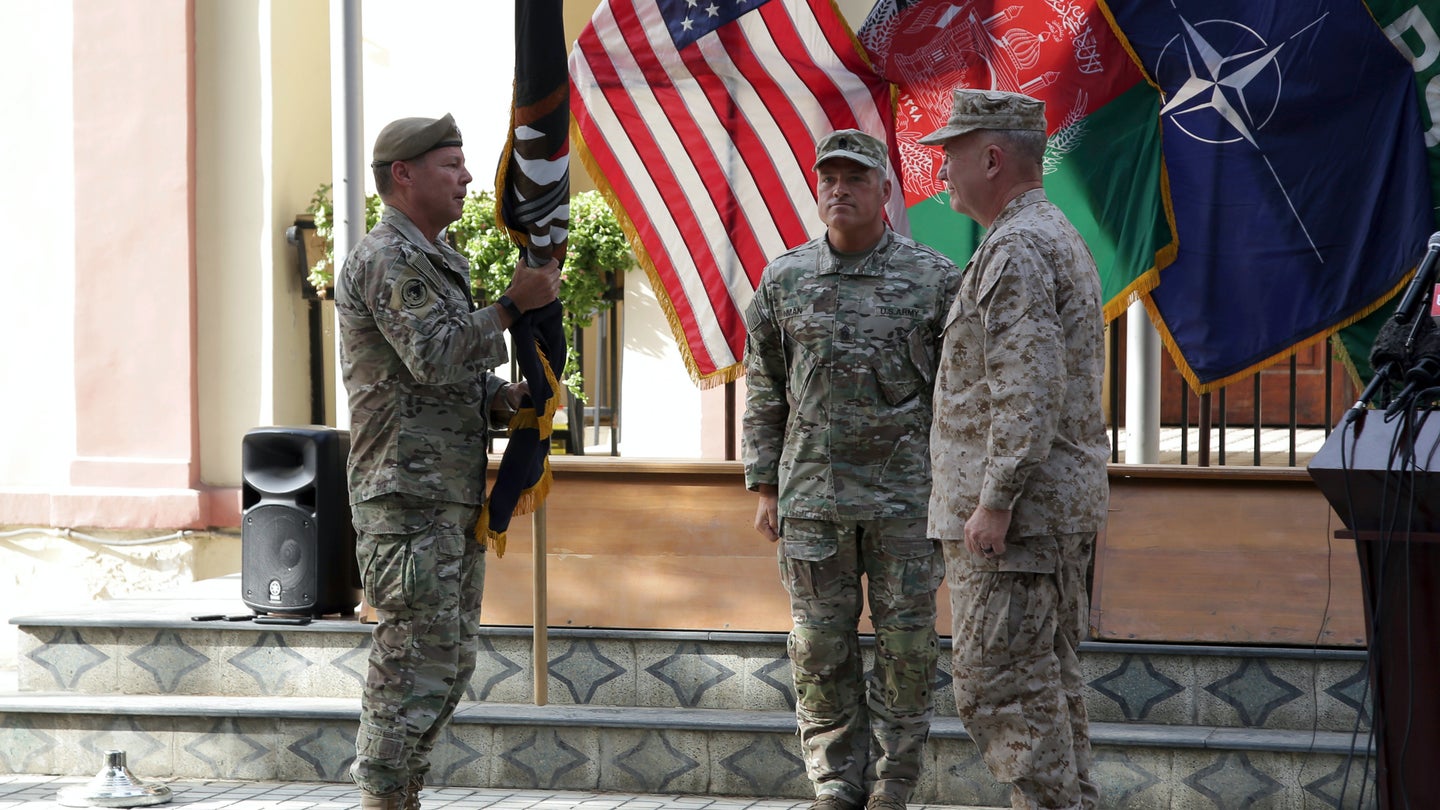 Army Gen. Austin “Scott” Miller, the longest-serving U.S. commander in Afghanistan, passed the baton for overseeing the military mission on Monday morning, marking yet another symbolic moment as the U.S. exits its longest war.

Miller has served as the commander of U.S. Forces-Afghanistan and the NATO-led Resolute Support mission for nearly three years.

Marine Gen. Frank McKenzie, currently the head of U.S. Central Command, will oversee the U.S. military mission in Afghanistan from his headquarters in Tampa, Florida, the Washington Post reports, while Rear Adm. Peter G. Vasely will oversee the security of the U.S. Embassy in Kabul and lead the roughly 650 troops who will remain in the country.

The change in command is the latest major development in U.S. troop withdrawal from Afghanistan. Just a week ago, the U.S. bid farewell to Bagram Airfield, reportedly surprising Afghan officials set to take over the base by not informing them of the exact date of departure.

While President Joe Biden recently said that the deadline for withdrawal is Aug. 31, officials have said it’s as good as done: a U.S. official told Politico last week the withdrawal “is over, for all intents and purposes,” and according to the Washington Post, “[v]irtually all other troops, contractors and equipment already have exited” the country.

Nevertheless, questions surrounding the withdrawal plan remain unanswered, among them the status of the evacuation of Afghans who have worked for the U.S. military. The Biden administration is still assessing where to evacuate Afghan interpreters and their families, who would surely be in danger by remaining in the country as the Taliban continues to gain ground there.

It’s unclear how many Afghans will the U.S. plans to evacuate, but a senior administration official told advocacy organizations last week that the Biden administration has not set a cap or floor on the number of evacuees.

“We are going to begin moving the most vulnerable people out as soon as they’re ready to be moved,” the official said on the call, according to a recording obtained by Task & Purpose. The Pentagon will hold its first meeting on the evacuation on Monday, according to the New York Times.

While U.S. officials have stressed that the Afghans have the ability to stand its ground against the Taliban, there is some doubt that they will. Pentagon spokesman John Kirby said on Thursday that the U.S. and its allies have “helped build a capacity” inside the Afghan forces that is “impressive,” but the question is “are they going to use that capacity?”

“Do they have the will to use that capacity?” Kirby said. “We know they’re fighters, and they have been in the fight … The question is now, for them, are they willing and able to come together as a government and use that capacity that they have?”

McKenzie said on Monday that the U.S. will continue to support the Afghan government, according to the Washington Post, but acknowledged that it “won’t be done like it was done in the past, and we need to be very clear about that.”