Don’t Let Erik Prince Anywhere Near The War In Afghanistan

With more than $700 billion spent (and at least $15.5 billion outright wasted) on America's long war in Afghanistan, it's... 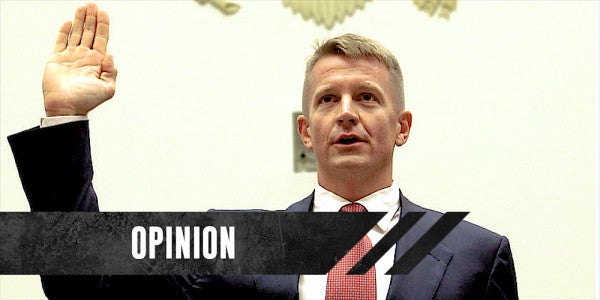 With more than $700 billion spent (and at least $15.5 billion outright wasted) on America's long war in Afghanistan, it's easy to understand why President Donald Trump might pursue unusual options to finally bring the 17-year-old conflict to a close.

Allowing Erik Prince to take over the war effort should not be one of them.

Prince's plan to take over the Forever War isn't new. In July 2017, the New York Times reported that Prince originally developed a proposal alongside defense contractor DynCorp International CEO Stephen Feinberg for the Pentagon to rely exclusively on private contractors “at the behest” of erstwhile Trump consigliere Stephen Bannon and son-in-law Jared Kushner.

Politely rebuked by Secretary of Defense James Mattis, it appears that Prince is now trying a new tactic: appealing to Trump directly through cable news. “I know he's frustrated,” Prince told NBC News of Trump's current attitude towards the war. “He gave the Pentagon what they wanted…and they haven't delivered.”

But history does not suggest that adopting a counterinsurgency strategy that leans heavily on private military contractors would be more conducive to long-term stability. Quite the opposite, really.

First, it's important to note that private security contractors aren't always a cheaper alternative to the military, as Prince has suggested. Blackwater in particular “harmed, rather than helped, the counterinsurgency efforts of the U.S. mission in Iraq, going against our best doctrine and undermining critical efforts of our troops,” according to a 2007 Brookings Institution analysis based on hundreds of interviews and decades of research on PMCs. “Even worse, the [U.S.] government can no longer carry out one of its most basic core missions: to fight and win the nation’s wars. Instead, the massive outsourcing of military operations has created a dependency on private firms like Blackwater that has given rise to dangerous vulnerabilities.”

Second, and more importantly: Prince's priorities in Afghanistan don't seem to align with the Pentagon's. Just consider his leaked Afghan war plan published by BuzzFeed News back in December 2017, in which he proposed plundering Helmand Province of approximately $1 trillion worth of lithium, uranium, phosphorus, and other rare elements. Doing that would risk reversing whatever progress American troops have made in the region thus far by fueling the jihadi narrative that the U.S. government is a purely predatory, imperial force focused on enriching itself and weakening Muslim countries.

In a May 2017 Wall Street Journal op-ed, Prince argued that the U.S. could turn around the Afghanistan War by handing it over to “one person: an American viceroy who’d lead all coalition efforts.” But who, exactly, is qualified for that job? Certainly not Prince. On his watch, Blackwater massacred Iraqi civilians; promoted “a culture of lawlessness” that yielded allegations of sex trafficking and weapons smuggling; and even threatened its own employees.

In the long run, the security situation in Afghanistan would likely only become worse if Prince is handed the reins, simply because his strategy appears designed only to benefit himself. Since the 2010 sale of Blackwater, Prince has spent his time standing up a “secret” private army for the United Arab Emirates and hawking militarized crop dusters for use as light attack aircraft by South Sudanese clients, among other profitable ventures. Why would Afghanistan prove any different?

Perhaps a well-trained PMC could affect the dramatic change required to stabilize the country that the Pentagon's bureaucracy structurally prohibits, but Prince seems constitutionally incapable of achieving that goal.

The war in Afghanistan is broken, yes. Erik Prince is not the man to fix it.