Erik Prince’s secret Seychelles trip was actually an embarrassing failure, according to the Mueller report

That Seychelles meeting had been previously described by U.S. officials as "an apparent effort to establish a backchannel line of communication between Moscow and President-elect Donald Trump." But not only did Prince achieve nothing, but nobody back home on Team Trump seemed to care 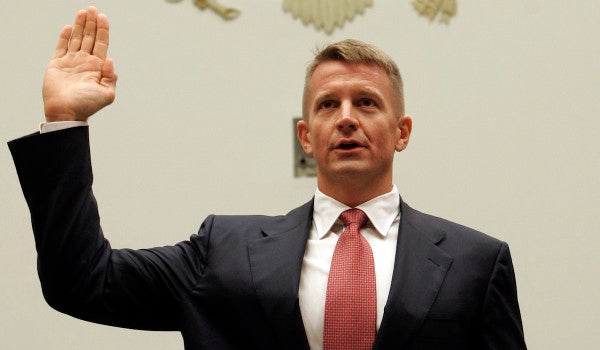 Erik Prince — the former Navy SEAL, Blackwater founder, and self-styled savior of the U.S. military campaign in Afghanistan — apparently used his secretive meeting in the Seychelles with a Russian moneyman linked to President Vladimir Putin to argue against Moscow's military involvement in Libya.

According to Special Counsel Robert Mueller's report into Trump-Russia collusion released Thursday, businessman George Nader arranged for Prince to meet with Kirill Dmitriev, the Putin-connected head of a the Russian Direct Investment Fund, telling the former that that “had been pushing Nader to introduce him to someone from the incoming Administration.”

Despite this enthusiasm for making inroads with the nascent Trump administration, Dmitriev was apparently “not enthusiastic” about meeting with Prince until Nader reassured him otherwise by pointing out that hey, his sister will be Secretary of Education soon!

“This guy [Prince] is designated by Steve [Bannon] to meet you!,” Nader told Prince in a text message on Jan. 9, 2017, less than two weeks before Trump's. “I know him and he is very very well connected and trusted by the New Team. His sister [Betsy Devos] is now a Minister of Education.”

Dmitriev and Prince met in the Seychelles two days later on Jan. 11. according to the Mueller report, the meeting mostly consisted of Prince talking himself up, telling Dmitriev that he “provided policy papers to Bannon … that he would inform Bannon about his meeting with Dmitriev.”

That's where things get tense:

Prince was probably referring to the live-fire exercise conducted by the aircraft carrier Admiral Kuznetsov and its battle group off the Libyan coast and the subsequent visit from eastern Libyan military commander Khalifa Haftar. These aren't the greatest events, but the Russian Ministry of Defense had previously announced it was recalling the Kuznetsov battle group from the Mediterranean Sea after negotiating a temporary ceasefire deal in Syria with Iran and Turkey, not retasking to carrier to Libya.

It seems like Prince really leaned into his own bluster — and Dmitriev, uh, did not receive Prince's bravado well at all:

That Seychelles meeting had been previously described by U.S. officials as “an apparent effort to establish a backchannel line of communication between Moscow and President-elect Donald Trump.” But not only did Prince achieve nothing, but nobody back home on Team Trump seemed to care.

When Prince returned from the Seychelles on Jan. 12, he “contacted Bannon's personal assistant to set up a meeting for the following week,” according to the Mueller report. “Several days later, Prince messaged her again asking about Bannon's schedule.”

When he finally met with Bannon, the incoming White House advisor “instructed Prince not to follow up with Dmitriev, and Prince had the impression that the issue was not a priority for Bannon,” according to the Mueller report. “Prince related that Bannon did not appear angry, just relatively uninterested.”

When asked about Prince's Seychelles meeting Bannon the Office of the Special Counsel that “he never discussed with Prince anything regarding Dmitriev, RDIF, or any meetings with Russian individuals or people associated with Putin,” according to the Mueller report. “He also stated that had Prince mentioned such a meeting, Bannon would have remembered it, and Bannon would have objected to such a meeting having taken place.”

Honestly, it sounds like Bannon straight up didn't remember because he didn't care. Either way, Prince was recently caught attempting to cover up what appears to be a lie in his earlier testimony before Congress. So much for Prince being a “very very well connected and trusted by the New Team.”