Neither the Afghan government nor the U.S. military believes in Erik Prince’s plan to privatize the war in Afghanistan, the... 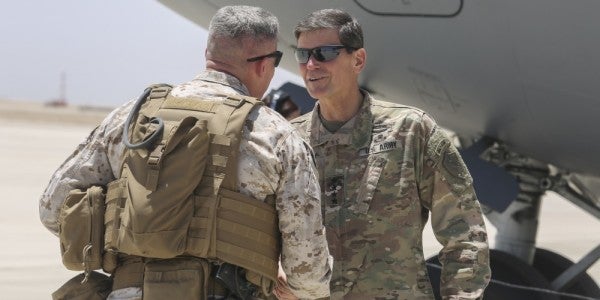 Neither the Afghan government nor the U.S. military believes in Erik Prince’s plan to privatize the war in Afghanistan, the commander of U.S. Central Command said on Thursday.

Erik Prince, founder of the company that used to be known as “Blackwater,” has argued that 3,600 private security contractors could do a better job than U.S. troops in Afghanistan. Moreover, Prince claims that his private army could completely change the strategic situation in Afghanistan in six months.

But Army Gen. Joseph Votel told reporters on Thursday that he doesn't buy Prince’s sales pitch. Citing Defense Secretary Mattis' previous comments on the subject, Votel said it would not be a good strategy to turn over U.S. national interest to contractors.

“We have vital interests here and we are pursuing them with legitimate forces that can do that,” Votel said during a Pentagon news briefing. “Even broader than that: The bilateral security agreement that I think is in place with Afghanistan does not allow this. The Afghans don’t want this. They would have to approve this as well, and I think as you’ve seen from some of their comments, they do not support this either.”

Afghanistan’s national security council announced on Thursday that it would take legal actions to block any effort to put private security contractors in charge of the war, according to TOLO News, an Afghan media outlet. “Under no circumstances will the Afghan government and people allow the counterterrorism fight to become a private, for-profit business,” the council said in a statement.

Blackwater gained notoriety during the Iraq war. The company’s contractors killed 17 Iraqi civilians and wounded 20 more in a September 2007 incident in Baghdad. Soon afterward, Congress made contractors subject to the Uniform Code of Military Justice, but it is an open question as to whether that is constitutional.

Nicholas Slatten, one of the contractors involved, was initially sentenced to life in prison for first-degree murder, but a U.S. appeals court overturned his conviction in 2017. The court also reduced the sentences of three other contractors because it found their lengthy prison sentences violated the Constitution’s ban on cruel and unusual punishment.

Slatten was prosecuted for murder a second time, but the jury was unable to reach a verdict and the case ended in a mistrial in September.

In August, Mattis said he did not see any advantages to having a private army take over the war in Afghanistan from the U.S. military.

“When Americans put their nation's credibility on the line privatizing it is probably not a wise idea,” Mattis told reporters during a news conference at the Pentagon.

Prince was not immediately available for comment, a spokesman for his latest private security from Frontier Services Group told Task & Purpose.

A spokesperson for Eric Prince sent T&P; a statement about Prince’s argument in favor of having security contractors take responsibility for the fight in Afghanistan. T&P; was unable to verify how much the U.S. government spends on the war in Afghanistan and what the attrition rate is for Afghan troops and police.

“Anyone who says that the current effort in Afghanistan is working is deluded,” the spokesperson said. “The US taxpayer is spending $62bn per year, our soldiers are dying and the Afghan army is losing 3% of its man-power every month due to death, injury or desertion. Something needs to change.

“The plan that I am supporting is not a privatization – that is a mischaracterization, there are currently 30,000 contractors in-country and this plan aims to reduce that number. It is a rationalization of the war effort to end this war.

“Sure there are detractors from those in Afghanistan and elsewhere who benefit from the status quo, but there is widespread support for this plan too across Afghanistan’s military, political and societal stakeholders. I know this first hand. They can see their people are dying and the war is being lost and they want change.”

UPDATE: This story was updated at 6 p.m. on Oct. 4 to include a statement from Erik Prince's spokesperson.