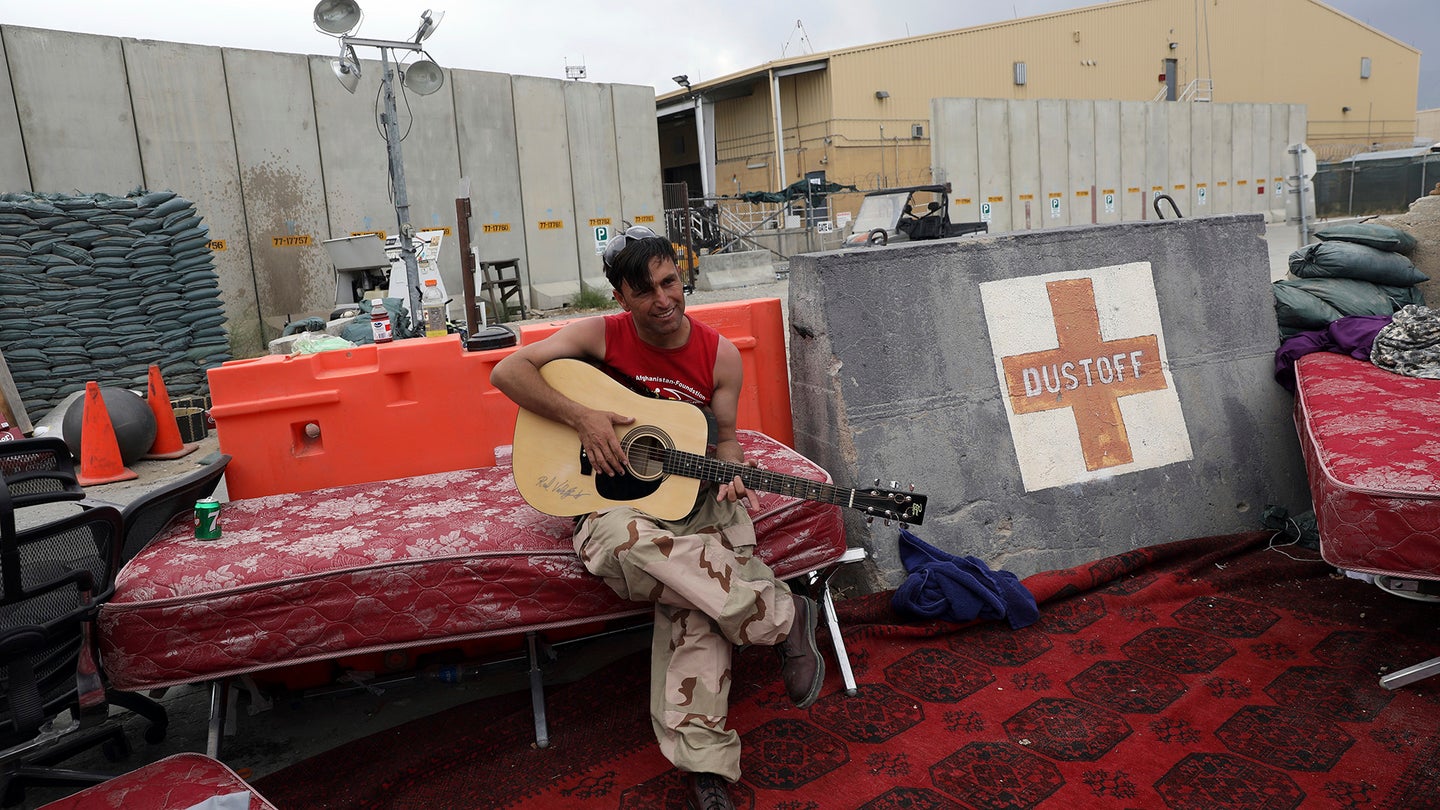 An Afghan soldier plays a guitar that was left behind after the American military departed Bagram air base, in Parwan province north of Kabul, Afghanistan, Monday, July 5, 2021. The U.S. left Afghanistan's Bagram Airfield after nearly 20 years, winding up its "forever war," in the night, without notifying the new Afghan commander until more than two hours after they slipped away. (AP Photo/Rahmat Gul).
SHARE

Pentagon spokesman John Kirby has repeatedly insisted that the U.S. military “coordinated” with Afghan officials before leaving Bagram Airfield but conceded on Tuesday that the coordination did not include telling the Afghans exactly when the last American plane would take off.

The Afghan general who is now in charge of the huge installation told the Associated Press that he found out that all U.S. troops had left Bagram Airfield more than two hours after their departure. One clue that the Americans were gone came when the base’s electricity and water were shut off on Friday. Looters took advantage of the darkness to pilfer, Afghan military officials told the Associated Press.

The quiet departure of Americans from Bagram Airfield appears to be part of a wider pattern on behalf of U.S. military officials to avoid providing any information whatsoever about the war in Afghanistan.

The U.S. military also did not hold any type of ceremony when Kandahar Airfield was turned over to the Afghans in May, according to Stars and Stripes reporter J.P. Lawrence. At the time, an Afghan military commander said the withdrawal of U.S. troops from the installation came as a surprise because there had not been any coordination with Afghan security forces.

A spokesman for the U.S. military in Afghanistan declined to say on Tuesday how many American service members are still in the country. “For security reasons, we cannot discuss current troop numbers,” said Jeff M. Nagan.

Still, Kirby insisted that the handover of Bagram Airbase to America’s Afghan friends and partners “wasn’t done in a vacuum” or “in some sort of shroud of secrecy.”

Army Gen. Austin Miller, the top U.S. commander in Afghanistan, and his staff had consulted with senior Afghan civilian and military leaders before American troops left the base, Kirby said. The final conversations about handing the installation over to the Afghans happened about 48 hours before the last U.S. service members left on July 2.

“The lexicon that I keep hearing about Bagram is ‘We turned out the light and left,’” Kirby said at a Pentagon news briefing. “It was a turnover, just like the previous six bases were turned over. And so, there were turnover discussions with Afghan leaders.”

That said, U.S. military officials have been handing over bases to the Afghans without any type of public ceremony or rituals that are common on most American military installations in the United States and overseas when a new commander takes the reins.

This too is due to security concerns, Kirby said. “We have not held ceremonies out of an abundance of caution for the safety and security of our people and our Afghan partners,” Kirby told Task & Purpose.

Moreover, Kirby’s description of exactly how the U.S. military gave the Afghans an advance notice about the final departure sounded oddly like when a friend promises to help you move while being sure to include enough wiggle room incase plans change.

To wit: The U.S. military did not tell the Afghans “the exact hour” when the last American troops would leave Bagram in case the Taliban wanted to attack during the withdrawal, Kirby explained.

In fact, the U.S. military would have been “irresponsible” if it had publicly announced when the last troops were expected to leave the base because defense officials continue to operate under the assumption that the Taliban could launch attacks at any time during the withdrawal of American forces, Kirby said.

“What I would say is the exact hour of departure was not divulged for operational security purposes,” Kirby said. “When we talk about this drawdown, we talk about it being safe and orderly. ‘Safe’ is the first word.”

When asked what message the U.S. military was sending to Afghan forces by not trusting them enough to keep operational details of the troop departure secret from the Taliban, Kirby replied: “I can’t speak for how the Afghans interpreted that decision, but it was a decision made in the best interests of the safety and security of our people.”

Kirby was unable to explain why the Bagram Airfield’s electricity was reportedly switched off minutes after U.S. troops left. Nor could he say if the Afghan general now in charge of the base had been informed by his leadership about the pending handover before July 2.

He declined to answer when specifically asked if U.S. military officials had not informed their Afghan counterparts on exactly when American troops would leave Bagram Airfield because they were concerned that Afghan troops could possibly launch an insider attack. Nine Americans were killed by an Afghan colonel in a 2011 “green on blue” attack at Kabul’s international airport.

The decision to not let Afghan military and civilian officials know the time of the U.S. military’s departure from Bagram Airfield “was made solidly in keeping with our concern for the safety and security of our people as they left Bagram,” Kirby said.