President Donald Trump said Tuesday that he would “gladly” visit U.S. troops at combat zones overseas “at some point” after... 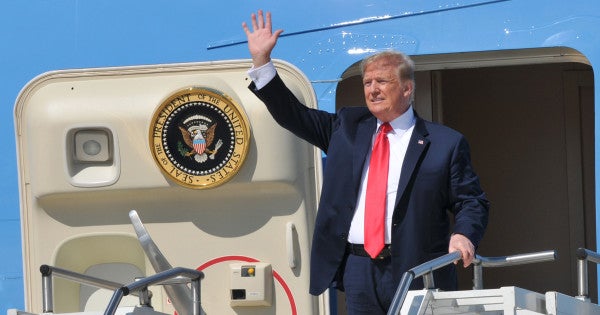 President Donald Trump said Tuesday that he would “gladly” visit U.S. troops at combat zones overseas “at some point” after being asked why he hasn't yet made such a trip after nearly two years in office.

“I’m doing a lot of things. But it’s something I’d do. And do gladly,” Trump told the Associated Press in a wide-ranging interview.

The president has faced criticism for not visiting U.S. troops at combat zones overseas — despite such trips being a bipartisan practice going back to World War II — although, Trump argued, he would gladly make the trip even though he doesn't think it's “overly necessary.”

He's arguably right. As I wrote previously on Twitter, the practice of presidential visits to war zones are often nothing more than what troops call “dog and pony shows” that are mostly photo ops, requiring the diversion of troops and resources away from a mission in order to receive the commander-in-chief.

Still, President Barack Obama visited troops in Iraq in 2008 as a senator and visited again as president after three months in office, while making four total trips to Afghanistan. President George W. Bush, meanwhile, met with troops in Baghdad about 9 months after the invasion of Iraq, ultimately making two trips to Afghanistan and four trips to Iraq, according to Business Insider.

Trump has visited stateside troops on a number of occasions, but has not yet made an appearance for troops in combat. Vice President Mike Pence, however, made an unannounced visit to meet troops at Bagram Airfield in Afghanistan before Christmas in 2017.

Here is the full question and answer:

AP: On the subject of American soldiers and military overseas, why have you not yet visited a military base in a combat zone like in Iraq and Afghanistan?

Trump: Well, I will do that at some point, but I don’t think it’s overly necessary. I’ve been very busy with everything that’s taking place here. We have the greatest economy in the history of our country. I mean, this is the greatest economy we’ve ever had, best unemployment numbers. Many groups are, you know, we’ve never even been close to these numbers. I’m doing a lot of things. I’m doing a lot of things. But it’s something I’d do. And do gladly. Nobody has been better at the military. Hey, I just got them a pay raise. I haven’t had a pay raise in 11 years. I just got them a substantial pay raise. ‘They’ meaning our military people. I just got them new equipment. They have stuff that was so old that the grandfathers used to fly it. I have done more for the military than any president in many, many years.