Editor's Note: This article originally appeared on Radio Free Europe/Radio Free Liberty. A U.S. aircraft carrier has sailed into the... 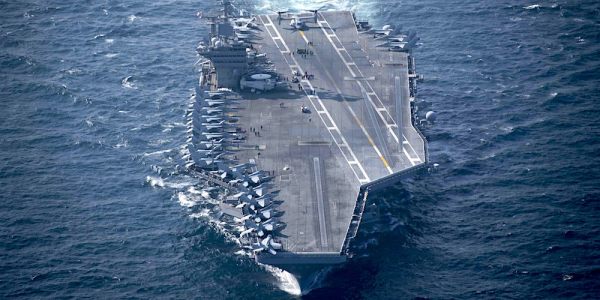 A U.S. aircraft carrier has sailed into the Persian Gulf, becoming the first in the region since President Donald Trump's decision to withdraw from the Iran nuclear deal earlier this year.

The December 21 arrival of the USS John C. Stennis came amid repeated threats by Iranian officials to close off the Strait of Hormuz, the narrow mouth of the gulf and the only outlet through which all ship traffic passes.

Iranian Revolutionary Guard vessels followed the carrier and its strike group as it arrived. There were also sightings of a drone, as well as rockets being test-fired away from the U.S. ships.

Iranian sailors on the accompanying ships could be seen photographing and videotaping the U.S. ships.

Tensions with Iran have been high since Trump's announcement that the United States was pulling out of the 2015 nuclear deal, which lifted crippling sanctions in exchange for Tehran curtailing its nuclear activities.

Iran is a major exporter of oil and a member of the OPEC oil cartel. Iranian President Hassan Rohani has repeatedly warned any attempt to stop Iran's exports could cause it to close off the strait.

How The Other Half Fights
iran
news
U.S. Navy
uss john c. stennis