Iran just sent a veiled warning to the U.S. military: We see you, and now we can reach you everywhere.... 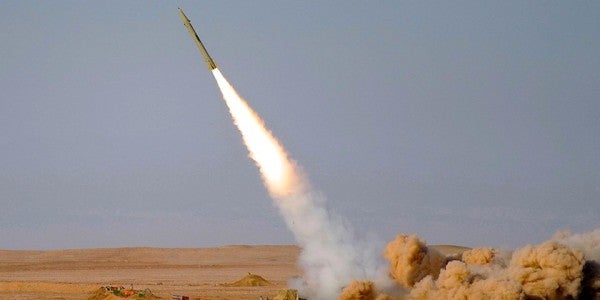 Iran just sent a veiled warning to the U.S. military: We see you, and now we can reach you everywhere.

Iranian Revolutionary Guard aerospace division chief Amirali Hajizadeh declared Tuesday that Iran had boosted the range of its land-to-sea ballistic missiles up to 700 km, or 435 miles, Reuters reports, capable of hitting “any vessel or ship” at that range.

In 2008, the Iranian military showed off a land-to-sea ballistic missile capable of reaching out to a range of 290 km (180 miles), Reuters notes, prompting Iranian Supreme Leader Ayatollah Ali Khamenei to push the Iranian military in the intervening decade to pursue the possibility of “hitting ships” with ballistic projectiles.

Ironically, the news comes just months after the IRG announced it had no plans to extend the reach of its existing long-range ballistic missile arsenal. But as Reuters notes, the enhanced missiles could still prove dangerous fodder when funneled to the Iranian regime's proxy allies in its neighbors Syria and Iraq.

More importantly, the immediate danger lies in the Persian Gulf, where U.S. Navy vessels from the 5th Fleet routinely operate. The Iranian regime spent the summer threatening the United States amid the unraveling of the historic nuclear accord establishing by President Barack Obama, declaring in August that the country maintained full control of the Persian Gulf.

“We remain committed to providing and promoting security and stability in the region and continue to stand with our partners to sustain freedom of navigation and free flow of commerce in international waterways,” U.S Naval Forces Central Command Cmdr. Joshua Frey told Task & Purpose in a statement. “We advocate for all forces to conform to international customs, standards and laws.”

Of course, it's not as though the Navy is unprepared. An August 2018 Congressional Research Service report noted that vessels outfitted with interceptors under the Aegis ballistic missile defense program are explicitly postured to defend against Iranian attacks, regardless of their actual area of operations.

“Our forces are more than capable of defending themselves should the need arise,” Frey told T&P.; “As a matter of policy, we do not discuss our offensive and defensive capabilities.”

Still, it's cause for some concern. Earlier this month, CNN reported that Iranian ballistic missiles fired at ISIS targets in Syria came “within three miles” of U.S. forces fighting there as part of Operation Inherent Resolve — missiles that had “death to America” emblazoned across the side. U.S. and allied interceptors may do the trick, but the added range for Iranian ballistics may be, well, a bit too close for comfort.