The US Is Putting More Pressure On Iran, But Don’t Expect Military Action

Secretary of State Mike Pompeo made clear on Monday that the Obama administration’s policy of détente toward Iran is dead.... 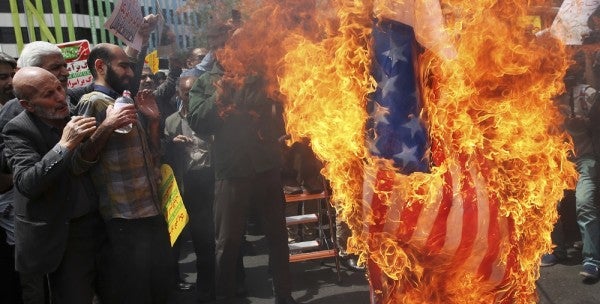 Secretary of State Mike Pompeo made clear on Monday that the Obama administration’s policy of détente toward Iran is dead.

Now that President Donald Trump has withdrawn from the Iran nuclear deal, the United States’ is finished offering the Iranian government carrots, according to the former CIA director. Instead, It’s time to bring out the stick.

“We will track down Iranian operatives and their Hezbollah proxies operating around the world and we will crush them,” Pompeo said at the Heritage Foundation think tank in Washington, his first public remarks since assuming the role of the country’s top dip “Iran will never again have carte blanche to dominate the Middle East.”

The U.S. government will “ensure freedom of navigation of the waters in the region,” Pompeo said, without specifically mentioning the Strait of Hormuz, where the Iranian Revolutionary Guards Corps has menaced U.S. warships in recent years.

Pompeo listed 12 demands that the United States has for Iran, including ending to Iranian military support to the Houthi in Yemen, withdrawing all Iranian forces in Syria; and respecting Iraq’s sovereignty and permitting the Iraqi government to disarm, demobilize, and reintegrate Shia militias.

“And I’d remind the leadership in Iran what President Trump said: If they restart their nuclear program, it will mean bigger problems – bigger problems than they’d ever had before,” Pompeo said.

Trump has ordered the U.S. government to create an international coalition to pressure Iran to abandon its support for terrorist groups and its development of nuclear weapons and ballistic missiles, a State Department official told Task & Purpose.

In contrast to the State Department’s tough talk, the Pentagon is taking a more nuanced approach by stressing that the entire U.S. government is part of the new Iran strategy and not just the U.S. military.

“As far as specific actions that we’re going to take, I’m not going to get into those,” Manning said at a Monday Pentagon press gaggle. “Iran remains a destabilizing force in the region and we’re going to do everything we can to avert that.”

Reporters pressed on, asking Manning what new actions the U.S. military will take against Iran.

“We are going to take all necessary steps to confront and address Iran’s malign influence in the region,” Manning said. “If that means doubling down on steps and actions that are currently being taken now; or, as a planning organization – obviously, I’m not going to talk about future operations – that could possibly entail new actions as well.”

The gaggle of reporters latched onto the words “new actions” as an indication that the Pentagon might actually do something that it hasn’t done before to deter Iran, but Manning clarified that the Defense Department is “still assessing” what to do.

The war will have to wait — at least for this news cycle.