CENTCOM corrects British general: US forces in Iraq and Syria on heightened alert for Iranian attacks

"U.S. Central Command, in coordination with Operation Inherent Resolve, has increased the force posture level for all service members assigned to OIR in Iraq and Syria. As a result, OIR is now at a high level of alert as we continue to closely monitor credible and possibly imminent threats to U.S. forces in Iraq." 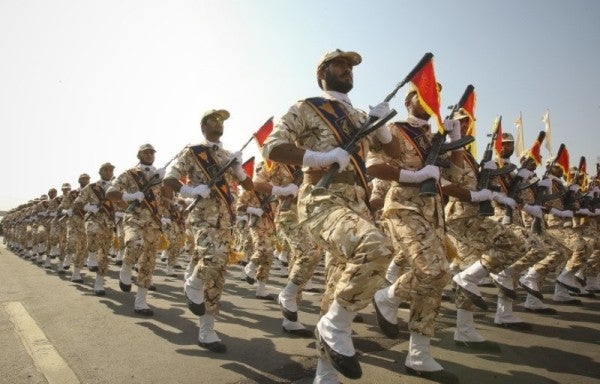 A British two-star general had to eat his own words on Tuesday after contradicting the White House, which has warned that Iranian-backed forces could attack U.S. troops in Syria and Iraq.

“There's been no increased threat from Iranian-backed forces in Iraq and Syria,” Maj. Gen. Chris Ghika, a deputy commander for the U.S.-led coalition against ISIS, told reporters at a Pentagon news briefing. “We are monitoring the Shia militia groups carefully and if the threat level perceives to go up them we will raise our force protection levels accordingly.”

But after being pressed by reporters on the matter, Ghika engaged in verbal gymnastics to try to say he was on the same page as the White House by saying the coalition monitors a range of possible threats and it raises and lowers security levels appropriately.

Eventually, when a reporter asked Ghika what if the threat condition level in Baghdad has been raised, the general replied: “If you come to Baghdad and you come onto our base in Baghdad, then we'll tell you what the threat level is.”

“U.S. Central Command, in coordination with Operation Inherent Resolve, has increased the force posture level for all service members assigned to OIR in Iraq and Syria,” the statement says. “As a result, OIR is now at a high level of alert as we continue to closely monitor credible and possibly imminent threats to U.S. forces in Iraq.”

Tensions with Iran have rocketed in the past week amid intelligence reports that Iran and its proxies could be preparing to attack U.S. forces in the Middle East. The Pentagon has approved sending more ships, bombers, and Patriot missiles to the Central Command region.

President Donald Trump disputed the story on Tuesday, telling reporters that he'd dispatch “a hell of a lot more troops than that” in case of war with Iran.

But Newsweek confirmed that Bolton has asked the Pentagon for a number of different scenarios to respond to Iran, ranging from airstrikes to pre-positioning the 120,000 U.S. troops to provide the initial footprint for a ground invasion of Iran that would involve a larger force.