The Army won't field its much-anticipated Meal, Ready to Eat pizza until 2019, but a few soldiers deployed to Afghanistan managed to... 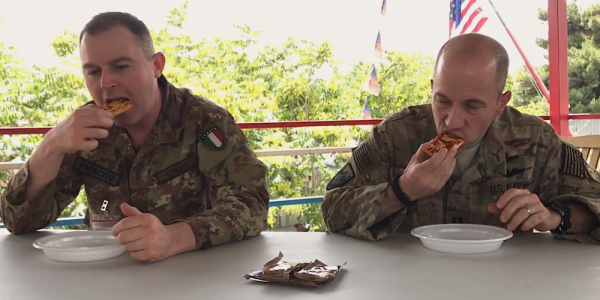 The Army won't field its much-anticipated Meal, Ready to Eat pizza until 2019, but a few soldiers deployed to Afghanistan managed to snag an early delivery thanks to our friends over at Stars and Stripes.

Reporter Chad Garland hauled several of the brand new MREs all the way from the U.S. so hungry warfighters could assess the quality of the new pizza.

Engineered by researchers at the Combat Feeding Directorate at the Natick Soldier Research, Development, and Engineering Center (NSRDEC) in Massachusetts, “real trick” to developing the new foodstuff was “get bread, sauce, cheese, and pepperoni inside of a pouch, happily together for at least three years,” as the Army put it in August.

So was the wait worth it? Let's find out:

The Army played down the negative reviews. After all, no controlled sampling in Kabul can capture the real environment in which an MRE is meant to be consumed.

“You can’t fully appreciate the value of an MRE unless you are cold, wet, tired and hungry — sitting in the dark and the rain on a mountain in Afghanistan,” NSRDEC spokesman David A. Accetta told Stars and Stripes. “That’s when the MRE, and the ability to have a hot meal anywhere, provides that touch of home and comfort.”

The pizza MRE heads downrange in 2019. Now all that's missing is a few cold beers …