Get Pumped: Soldiers Are About To Get MRE Pizza That Can Last For 3 Years

Hey bro, did you hear about that new pizza joint a couple blocks from the gate? Dude, it's awesome. They... 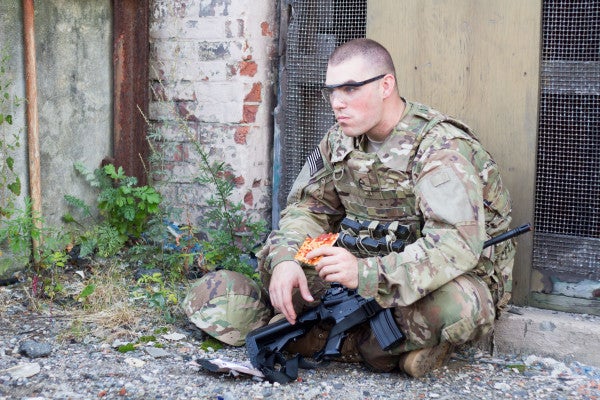 Hey bro, did you hear about that new pizza joint a couple blocks from the gate?

Dude, it's awesome. They make pizza there that can last for three frickin' years.

What??? Does it taste good?

Whoa whoa there. Let's not talk about that one.

Yeah, that's right, pizza lovers. The U.S. Army has used its extensive skill and imagineering to come up with a pizza that can be put on a shelf for three years at 80 degrees and still remain edible.

It may not actually taste good, but at least it will be edible.

The famed “Pizza MRE” has been rumored for years among service members, but it looks like it will finally make its debut this month, according to Army public affairs.

It was a long road to go from a delicious and often enjoyable meal to getting it into a box that can last for years only to be opened by a soldier fighting overseas, heated up on a magical rock or something, and thus, forever tarnishing the word “pizza” in the minds of America's fighting force.

This looks so delicious you could almost mistake it for a slice from Grimaldi's.US Army

I first spoke with one of the wizards in charge of this miracle pizza in early 2016 when the Army was saying it would hit shelves the following year. Army food technologist Lauren Oleksyk told me its taste would be similar to “day after pizza” or what you might find in the junior high cafeteria.

At that time, they were able to make a MRE pizza work in the lab, but they later ran into some snags with large scale production.

Thankfully, they figured it all out now. So look for that MRE Pizza #37 in your pack within the next few months.

Just make sure you are near a port-a-potty first.