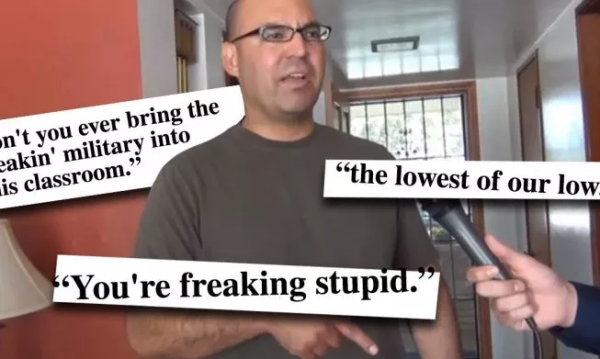 The high school history teacher from El Rancho High School in Pico Rivera, Calif. who famously called military service members the “lowest of our low” earlier this year has finally been fired.

The El Rancho school board voted Tuesday to fire Gregory Salcido, 49, following numerous complaints about his behavior in the classroom on Jan. 19, when he was secretly filmed bullying a 17-year-old student for wearing a U.S. Marine Corps sweatshirt.

“They don’t have electricity,” said Salcido. “We have all our freakin’ night vision goggles and all that kind of stuff, and we can’t freakin’ control these dudes wearing robes and . Because we’ve got a bunch of dumbshits over there. Think about the people you know over there. Your stupid Uncle Louie or whatever, they’re dumbshit.”

Incredibly, this wasn't the first time Salcido was cited for courting controversy (or being what I would call a total asshole). He allegedly threatened a student in 2010 and “smacked” a student in 2012, both of which got him placed on administrative leave.

During the January incident, Salcido railed against military members as not being “talented people,” while ordering the 17-year-old he was berating to never again wear the Marines sweatshirt, which he was sporting to show pride in his family's service.

Now that he doesn't have a job, he may want to go to the nearest military recruiting office. I hear they offer good benefits.