Fifteen years ago this month, we invaded a rogue state and deposed its dictatorial “president” to protect the innocent against... 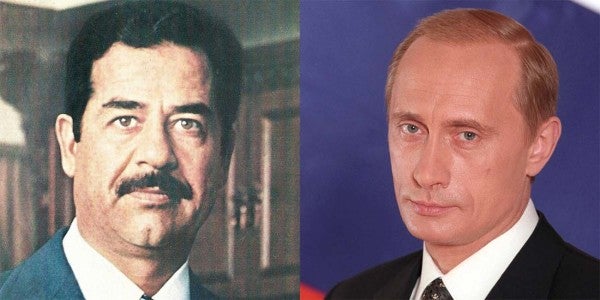 Fifteen years ago this month, we invaded a rogue state and deposed its dictatorial “president” to protect the innocent against weapons of mass destruction. That was our story, anyway: In violation of international law, he used his iron rule, terrorist contacts, and a burgeoning chemical weapons program to extend his influence and threaten the lives of Americans and their allies.

“The United States and other nations did nothing to deserve or invite this threat. But we will do everything to defeat it,” President George W. Bush announced in his ultimatum to Saddam Hussein before the bombing started. “Instead of drifting along toward tragedy, we will set a course toward safety. Before the day of horror can come, before it is too late to act, this danger will be removed.”

Today, few people seriously argue that the U.S. succeeded in its war there — my war, the war for many of our readers (until Afghanistan ramped back up). It drained trillions in American wealth; it killed and maimed thousands of Americans (and 25 times as many Iraqis); it enhanced Iran’s standing in the region while eroding the U.S. advantage in statecraft; and it gave global jihadism a great big public-relations and recruiting gift.

That war appears to have a new horrible consequence: making us complacent about an actual rogue state using actual chemical weapons in an attempt to kill civilians on the sovereign soil of the United States’ closest ally.

I’m referring to the now-all-but-proven Russian nerve-agent assassination attempt against an ex-spy and his daughter in Salisbury, England, that not only left the pair in critical condition, but seriously poisoned the police officer who found them; sent two more police officers to the hospital; gave 21 bystanders and first responders illness symptoms that required immediate attention; mobilized British military units; and shut down swaths of an idyllic cathedral town not far from Stonehenge.

British Prime Minister Theresa May, who hasn’t managed to look competent at much of anything the past year, looked positively livid in laying out before cameras yesterday evidence that the attack utilized a “weapons grade” novichok nerve agent — Russian for “newcomer,” developed by late Soviet spies for covert killings. These toxins are reportedly more portable and more powerful than run-of-the-mill nerve agents like VX and Sarin, likelier to linger in the open, and known to be possessed by one nation.

“Either this was a direct action by the Russian state against our country, or the Russian government lost control of its potentially catastrophically damaging nerve agent and allowed it to get into the hands of others,” May said, in language that neatly mirrors what Bush administration officials said Saddam and his terrorist pals were capable of in Iraq. Strike, before things get worse: “We don’t want the smoking gun to be a mushroom cloud” was their mantra.

So what do we do now, when there is a smoking gun, and it’s a plume of nerve gas? Russia (or someone close to its closest secrets) actually used a deadly chemical weapon to try to kill people in one of the stateliest corners of Great Britain, an ally that the U.S. is bound to defend from attackers under NATO’s Article 5.

“It was an indiscriminate and reckless act against the United Kingdom, putting the lives of innocent civilians at risk,” May said. She is understandably pissed and already close to a war footing: “Should there be no credible response, we will conclude that this action amounts to an unlawful use of force by the Russia state against the United Kingdom,” she told lawmakers Monday night.

May says she will give Russia until end of tomorrow to respond to nerve agent attack against ex-Russian spy. "Should there be no credible response, we will conclude that this action amounts to an unlawful use of force by the Russia state against the United Kingdom." pic.twitter.com/9qzhJZYL1Q

I don’t want a world war, certainly not over their back-and-forth games of spy-versus-spy. It’s not generally a good idea to risk a global human rights catastrophe, even over a clear violation of national sovereignty, human decency, and global norms. One of the Iraq War’s other lessons is that doing… something isn’t always better than doing nothing.

But Russian leaders know all this; they know Western voters are exhausted with indeterminate wars, and Western leaders are weary of opening one. So they troll us with asymmetrical attacks — not just in their acts on allied sovereign soil, but in their responses to our media’s questions about it:

It’s a shitshow of the West’s own making. “Get to the bottom of things there first, then we’ll talk about this,” Russian President and former KGB head Vladimir Putin told a BBC questioner about the nerve-agent attack.

It’s chickens coming home to roost. “I would just like to tell Russians who hope to hide in Great Britain from ‘bad Russians’ one thing: It’s going to be very unsafe for you,” a Russian parliament leader told the Guardian, while still swearing his government wasn’t to blame, like a slumlord’s enforcement goon. “It’s long since become a place where bad things happen. This isn’t Moscow’s fault, something is happening over there.”

It’s nothing, and we’ll prove it, just as soon as you prove you’re not using nerve agents, too. “Russia is ready to cooperate in accordance with the convention to ban chemical weapons, if the United Kingdom will deign to fulfill its obligations according to the same convention,” Moscow’s foreign minister, Sergei Lavrov, said in a press conference.

That is some straight-up Baghdad Bob-style whataboutist bullshit. That is not how innocent or responsible nations act. At least, it wasn’t, up until recently.

What can be done about it? I don’t know. But I know this: If you believed Saddam Hussein was a global bully who posed a grave threat to our safety and sovereignty, and you’re sleeping on Vladimir Putin, you may as well just stay asleep.