In the years since the Pentagon ordered the Marine Corps to open all previously-male only combat specialties, the service has... 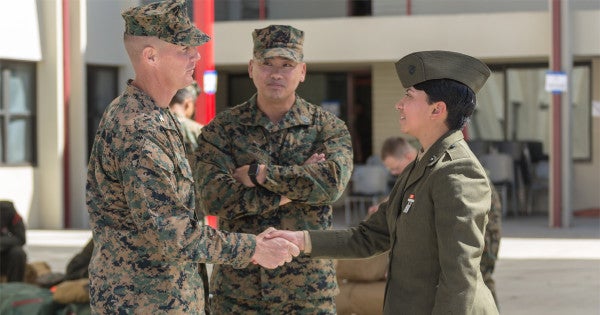 In the years since the Pentagon ordered the Marine Corps to open all previously-male only combat specialties, the service has been adamant that it would never lower its standards.

If women want to be in the infantry, artillery, or engineers, they would have to pass the same requirements as men, the Corps said. Marines would be treated the same regardless of gender, its spokesmen assured skeptical men within the ranks.

So why is the commanding officer of the School of Infantry-West — where female Marines will now be training at Marine Combat Training (MCT) at Camp Pendleton, Calif., for the first time — shaking the hand of a female private who just stepped off the bus?

To be clear, I'm not criticizing the female Marine in the photograph above. As an E-1 just a week or so out of boot camp, she was probably told to set down her bags and go over to see the full-bird colonel. But there is a problem: Such a photograph represents terrible optics to the thousands of male Marines currently serving in combat roles.

I've been on both ends of a Marine's first day at SOI, so let me tell you how it works. As a private first checking in at Camp Geiger, N.C., in 2003, I got off the bus in the freezing cold and was greeted only by rough sergeants, who told me to get my shit placed in the pile of seabags and then stand over in formation as others did the same.

Then, as a sergeant myself in 2006, I was on the other side, screaming at these brand new Marines to “get in formation, hurry the fuck up, and, oh by the way, how about you yell Aye Sergeant a hell of a lot louder than that?”

Not even the commanding officer of the company showed up, let alone the top officer of the entire school. So it's hard for a lot of male Marines to look at the photo of Col. Jeffery Holt shaking that female private's hand and not think the worst:

These women are special. Just look at them, they get greeted warmly by the commanding officer and the sergeant major. And they'll probably get special treatment when they get to their unit, too.

That may or may not be true. Perhaps female Marines will be treated just like the rest of the male Marines when they check into their unit after graduation. The leadership of 1st Battalion, 8th Marines, for example — which has three female Marine infantrymen — said last year that men and women would sleep side-by-side when in the field, in order to maintain unit cohesion.

“We’re not changing our tactical posture or changing how we operate to accommodate the inclusion of female Marines,” Maj. Charles Anklam, 1/8 executive officer, told CBS News, demonstrating exactly the kind of attitude that should be expected if we want gender equality in the grunts.

Now, I get it. This is another historic moment for female Marines, who in the past have only gone through the East Coast version of MCT. I support this move, along with further integration, regardless of gender — as long as the standards remain. And I agree with retired Marine Lt. Col. Kate Germano that moments like these should be made known in the press so as to attract more talented women to the Corps.

But standards are about more than whether a Marine can do the right number of pull-ups, or if they can carry a .50 caliber machine-gun on a hike. There are standards of treatment in the ranks, and at the risk of sounding like an old man yelling at a cloud, the treatment this young female Marine received was not the same as the male counterparts that have come before her.

This may not seem like a huge issue, but one only needs to look to the reactions of many male Marines to any hint of lowering standards, or the 2015 controversy surrounding female Army Rangers being “cheered on” in their training — even though that claim turned out to be bunk.

The male-dominated combat arms community still largely believes women trying to join their ranks will not be treated the same as they were. They are suspicious of the motives of their leaders and the media that pushes them forward.

The Corps can't have it both ways. Does it want to build a force that works together to defend the nation, that is blind to race, gender, or creed? Does it want units whose ranks are free of suspicion and animosity?

If so, then its leaders need to start acting like it and save the handshakes, for every male and female Marine, until graduation day.